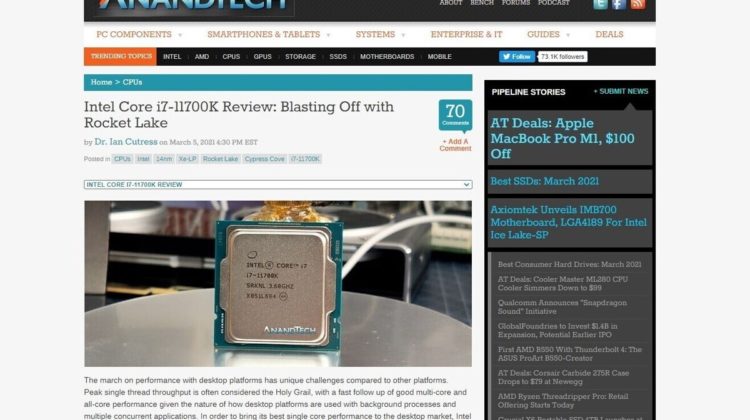 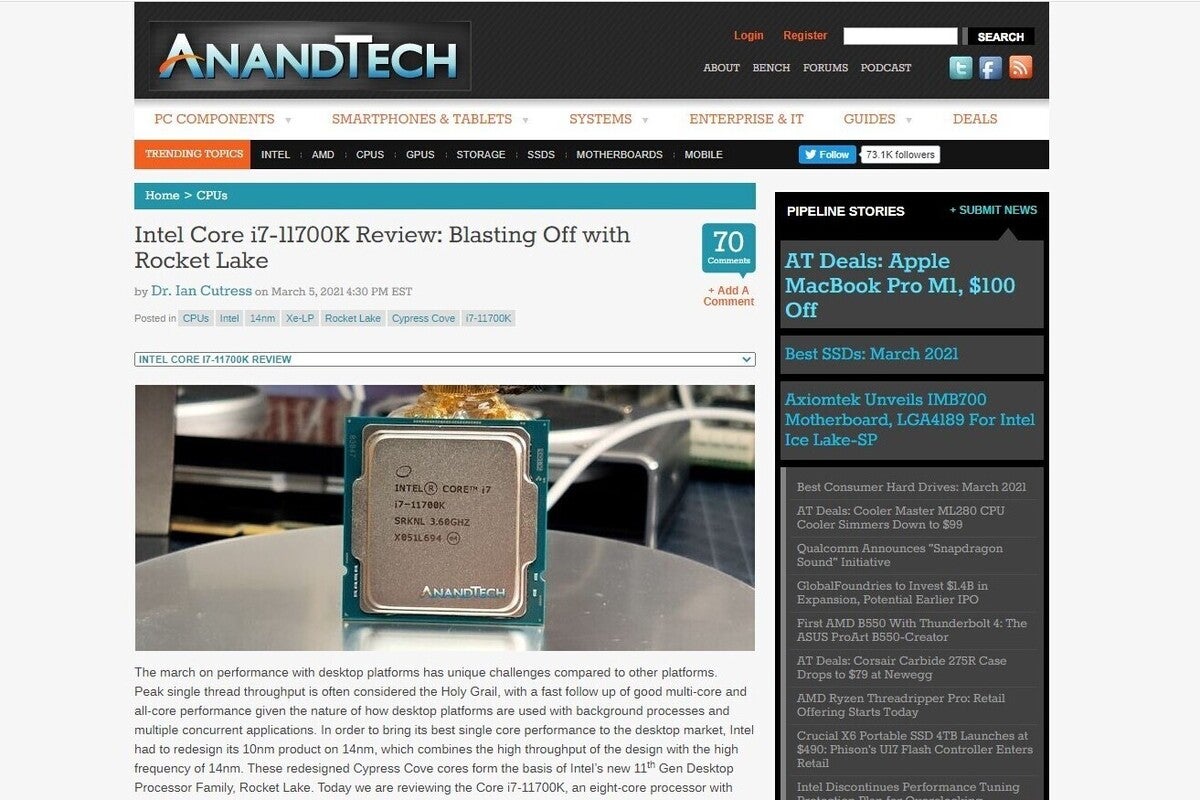 Intel’s 11th-gen Rocket Lake chip won’t hit shelves until the end of March, but an unexpectedly early “review” of a retail Core i7-11700K labels the chip as power-hungry and unable to surpass AMD’s Ryzen 7 5800X in many tests.

The review, written by respected CPU expert Dr. Ian Cutress of Anandtech.com, was based on a Core i7-11700K that is presumably one of the hundreds of CPUs that were accidentally sold a month before launch by a German retailer.

Benchmarks of the chip have been making the rounds ever since, but Cutress is the first experienced journalist to publish a review.

Cutress stepped carefully in his story, avoiding mention of any information he had already been given by Intel under embargo during regular briefings for the chip. He said he informed Intel that he had the chip and was planning to review it, and Intel declined to comment further.

Interestingly, Cutress would not disclose the motherboard he used, citing “NDA [nondisclosure agreement] reasons,” nor would he reveal the BIOS version used with the chip. As we noted earlier this week when we covered the accidental sales, chip vendors often fiddle with the BIOS up to the last minute before a launch, with expected changes to performance as a result. Cutress is one of the more knowledgeable reviewers out there, so it’s unlikely he was reckless in his testing or conclusions.

As a CPU using a mobile core mapped onto an older 14nm process, it’s been supposed that Rocket Lake might run hot—and no surprise, it does. Cutress measured his chip spiking to 292 Watts and 104 degrees Celsius, under a worst-case scenario. Under the same load, the Core i9-9900KS pushed 231 watts, and the Ryzen 7 5800X, a mere 141 watts.

In encoding, rendering, scientific, and compression tests published by Cutress, the Core i7-11700K Rocket Lake traded blows with the Ryzen 7 5800X. The Rocket Lake chip scored some definite wins, came close in a few others, and solidly lost a few as well.

Against its sibling, the Core i9-9900KS, the Core i7-11700K often won, but Cutress found Intel’s claim of a 19-percent increase in IPC (instructions per clock) to depend largely on the workload. Floating-point operations achieved that 19 percent, but integer workloads often sank to 13 percent, or even 7 percent for multi-threaded workloads.

Perhaps the Core i7-11700K’s most disappointing showing was in gaming. The Ryzen 7 5800X largely outpaced it in game settings where the GPU did not bottleneck the chips.

Why even buy Rocket Lake?

If a chip runs hotter, and doesn’t always go faster, it would seem this contest is already over before Intel’s 11th-gen Rocket Lake even launches. But these are frustrating times for PC enthusiasts, when some of the most desirable parts are in short supply, including Ryzen 5000.

Cutress acknowledges the difficulty of recommending Ryzen 5000 when you can’t actually buy it. “Our results clearly show that Intel’s performance, while substantial, still trails its main competitor, AMD. In a core-for-core comparison, Intel is slightly slower and a lot more inefficient. The smart money would be to get the AMD processor,” Cutress wrote. “However, due to high demand and [AMD’s] prioritizing commercial and enterprise contracts, the only parts readily available on retail shelves right now are from Intel.”

Cutress closes by saying that, all testing aside, getting a good chip for a good price is better than getting a better chip for a terrible price—if you can find it at all. “The clear answer during this chip crunch,” Cutress advises, “is to buy the processor you can find at a reasonable price.”

NEW YORK (AP) — Stocks that traded heavily or had substantial price changes Monday: Tesla Inc., down $12.41 to $182.45.The electric vehicle maker is … END_OF_DOCUMENT_TOKEN_TO_BE_REPLACED

Given enough time, most quality stocks will eventually double, triple, quadruple, and even quintuple their value. That's just how capitalism works. No … END_OF_DOCUMENT_TOKEN_TO_BE_REPLACED