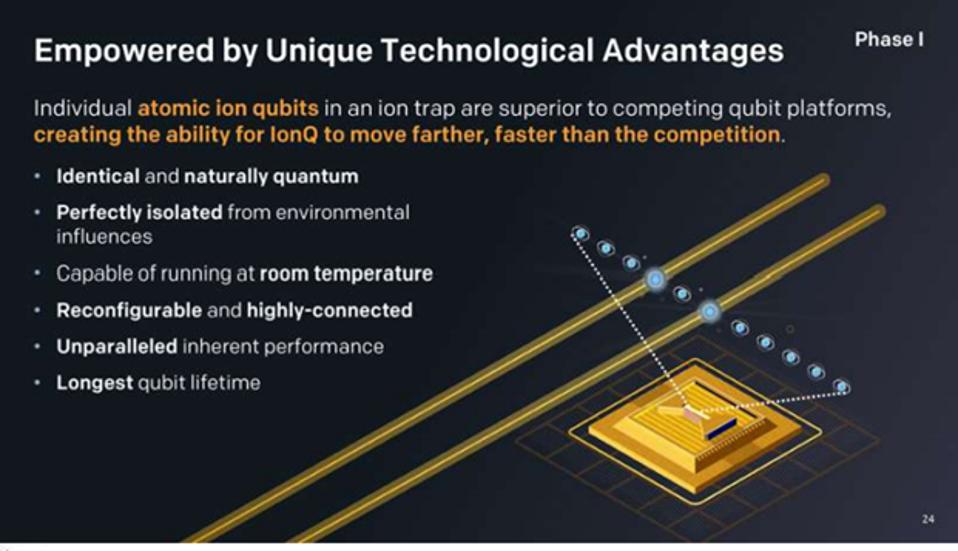 In anticipation of SEC approval of its filing to become a listed stock on the NYSE, IonQ previously sponsored a virtual symposium for key analysts in the investment community. The objective was to provide the analysts with a better understanding of quantum computing, IonQ’s potential, and its technology and business differentiators.

I previously published part one of a two-part analysis about that event. Part one focused on IonQ’s management structure, funding history, and business strategy. Part one can be read here.

In addition to marketplace advantages in the quantum computing space, IonQ has strong technical benefits derived from its trapped-ion approach. Peter Chapman’s unique blend of commercial and technical leadership has also benefited IonQ, yielding an accelerated multi-generational strategy for hardware and engineering improvements. Some of the advantages IonQ presented to the analysts included: 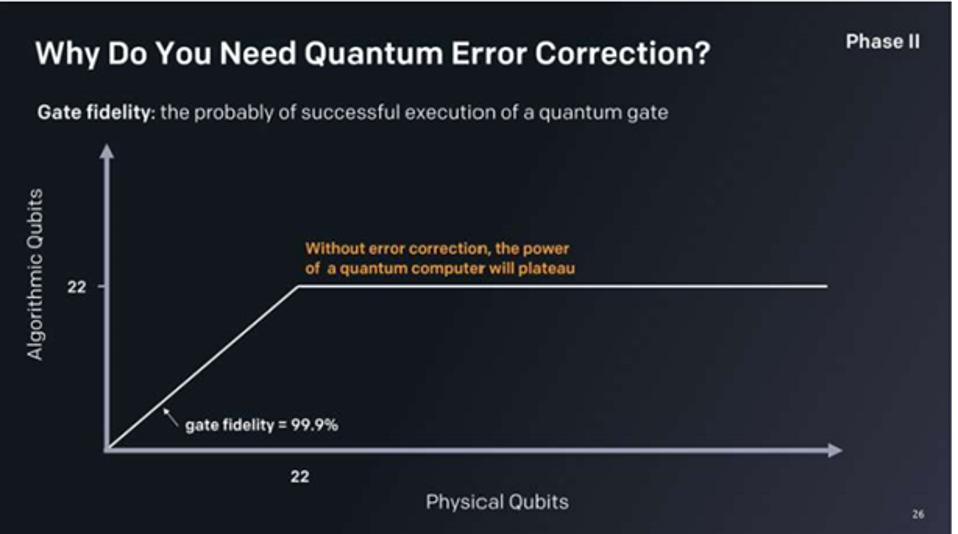 Why Do You Need Quantum Error Correction?

Scientists have been unable to build a large fault-tolerant quantum computer because it is not yet possible to implement error correction at scale in quantum computers. Unlike classical computers, which statistically rarely make errors, quantum computers are error-prone in several specific ways. During the presentation to analysts, Dave Bacon explained the significance of these errors and why qubit gate fidelity is so important.

Error correction – Using many qubits to get one good qubit 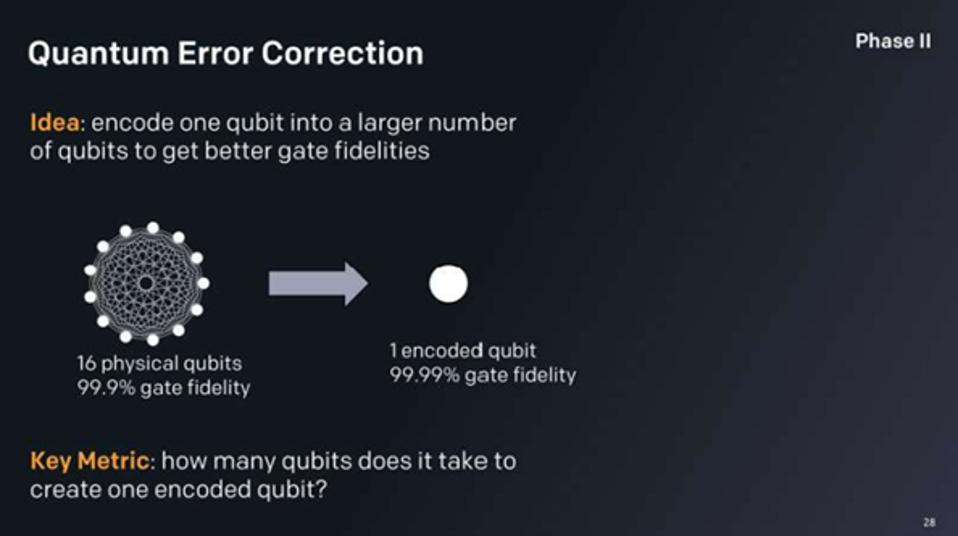 Dave Bacon explained to the virtual audience of analysts an error-correction protocol he co-developed several years ago. It is called the Bacon-Shor code and is well-known within the quantum research community. Although the details are complex, the general idea is simple: use 16 raw physical qubits with 99.9% gate fidelity to produce one error-corrected qubit with a 99.99% gate fidelity. That ten-fold increase in gate fidelity makes many more qubits available for actual logic computations instead of just being “noise.” 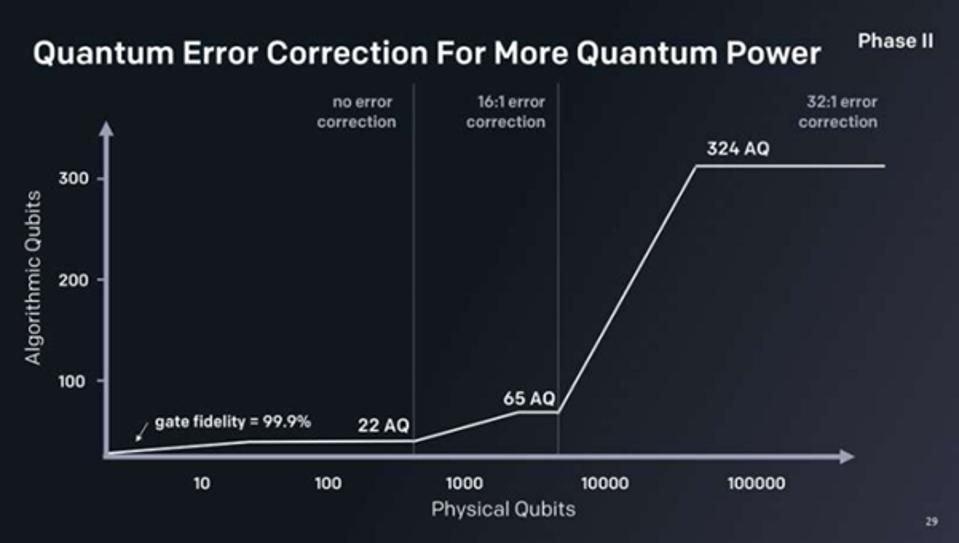 The chart above shows a quantum computer’s computational capability based on the relationship between physical qubits, algorithmic qubits, and gate fidelity.

a. With no error correction and with qubits with 99.9% gate fidelity, the quantum computer cannot use more than 22 algorithmic qubits for computation, regardless of how many qubits are available.

b. By employing a 16:1 error-correction protocol, gate fidelity increases to 99.99%, and allows the use of 65 algorithmic qubits. To produce those 65 usable qubits with a 16:1 protocol would require 1,040 physical qubits.

IonQ’s hardware allows error correction to be introduced as needed, or “just in time,” if you will. 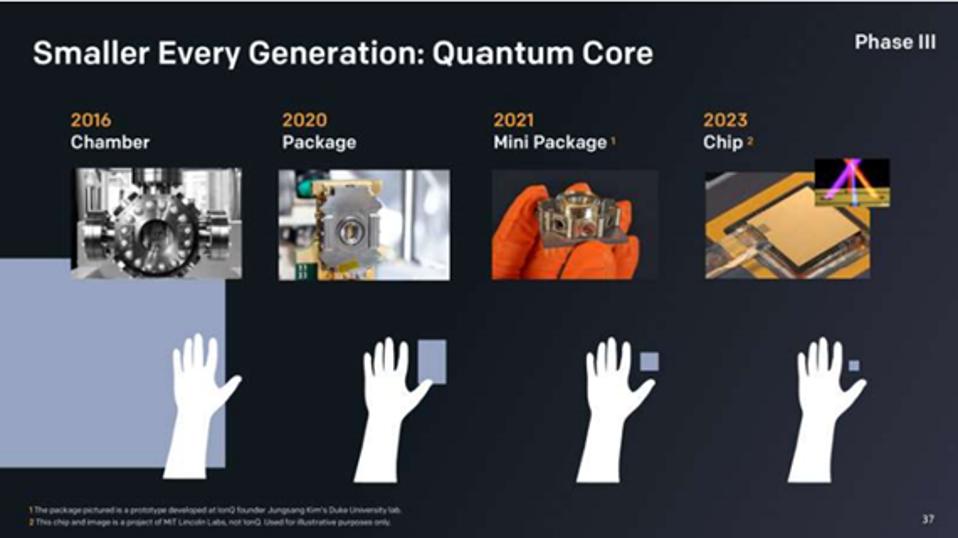 According to Jungsang Kim, achieving indefinite scaling of trapped ion qubits requires developing a quantum computer with a modular architecture. IonQ plans to pave the way to modularity by creating smaller, lighter, and cheaper quantum processing units (QPUs) that can be networked together to form a larger computer. Modular trapped-ion quantum computers also scale better because they are easier to manufacture.

Kim said, “If you want to get to scalable quantum computers, it has to be modular, no matter what physical qubit architecture we use.”

Scaling a classical computer compared to scaling a quantum computer is different. Almost everyone has heard of Moore’s law. Even though it is fast approaching its limits, it allows for an interesting comparison between transistors and qubits.

Moore’s law predicts that a classical computer will double its power and necessarily double the number of chip transistors (in the millions and billions depending on the chip) every two years. On the other hand, the addition of a single qubit doubles the power of a quantum computer. To keep pace with classical machines, a quantum computer need only add one qubit every two years.

The graphic above shows how IonQ’s computers have changed since 2016. Initially, the ion trap was in a large vacuum chamber that looked like a diving helmet. It has progressively gotten smaller. The small unit that can be held in your hand is a working prototype that exists today. 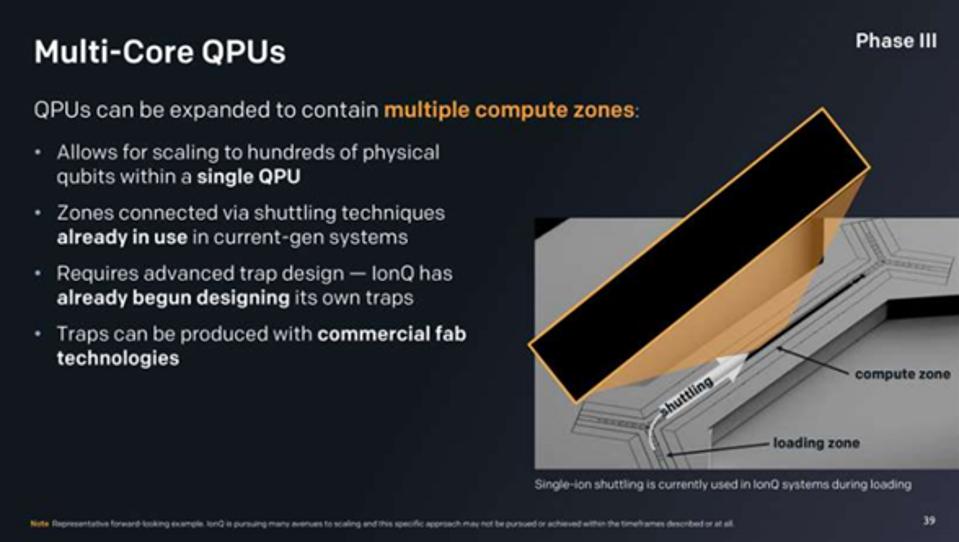 IonQ’s current quantum computers each consist of a single quantum processing unit (QPU). Much like CPUs for classical computing, a QPU is a single machine that can perform operations independently. It also can be networked together with other QPUs to form an even more powerful machine. The QPU will accommodate hundreds of physical qubits. IonQ plans include a future architecture that chains numerous QPUs together. 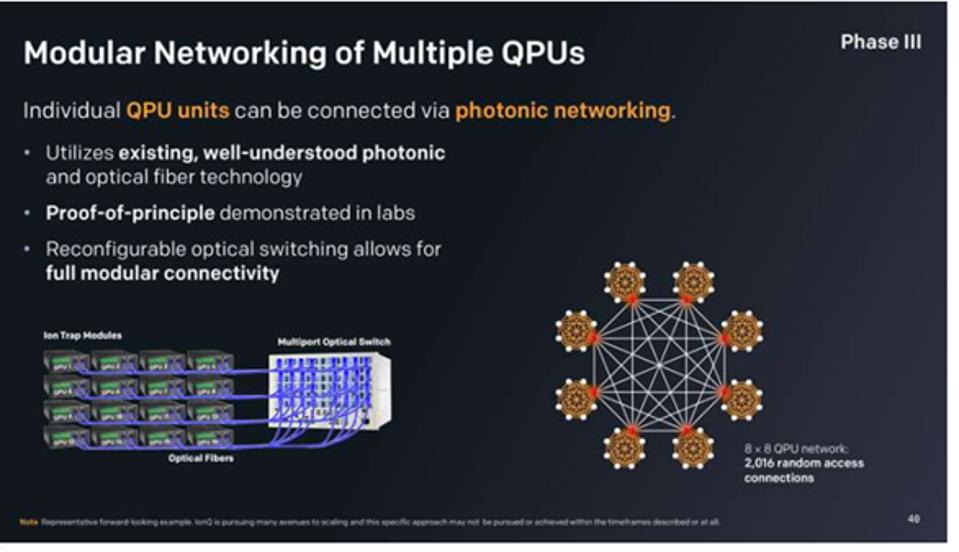 In the early 2000s, when Jungsang Kim worked for Bell Labs, he helped build the world’s largest optical switch, with more than 1000 optical ports. It is no surprise that a large optical switch will be part of a future advanced architecture for a highly scalable quantum computer. Such a switch may provide connectivity between thousands of quantum processing units in a quantum data center one day. In 2007, Chris Monroe proved, for the first time, that it is possible to use photons to communicate via optical switches. Over the past 15 years, Monroe and other researchers have further developed this research to productize it for networking quantum computers. This technology will serve as the basis for high-bandwidth connections between QPU devices.

In the next few years, IonQ plans to integrate this technology with its quantum computers. With full-scale modular connectivity, such a system will allow connections between any qubits inside the system located across any number of QPUs. Moreover, the link will not require more than one hop through the optic photonic network. It will be a fully connected configuration in a modular architecture. This versatile and highly scalable architecture will be extremely powerful for executing large-scale, complex quantum computational problems, regardless of the structure of the problem. It is key to IonQ’s scaling goals.

Note: Moor Insights & Strategy writers and editors may have contributed to this article.

[ad_1] Superconducting quantum computers are huge and incredibly finicky machines at this point. They need to be isolated from anything that might … END_OF_DOCUMENT_TOKEN_TO_BE_REPLACED