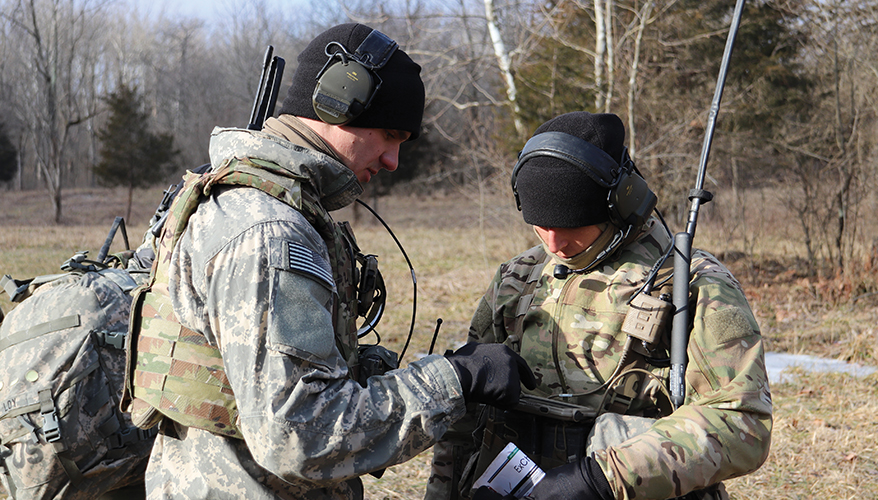 The Army is gearing up for Project Convergence 2021 where it will field a number of new modernized tactical communications technologies.

Network modernization is one of the top priorities being spearheaded by Army Futures Command. The new capabilities are intended to improve the capacity and resiliency of the service in order to compete in high-end fights against near-peer adversaries.

To achieve its network goals, the Army is pursuing a series of two-year capability sets. Each set has a number of design objectives including: unified network; common operating environment; joint interoperability/coalition accessible; and command post mobility/survivability, according to the service.

The Army completed the preliminary design review for the next round of network tools, known as Capability Set 23, in April, service officials told reporters during a media day hosted at Joint Base Myer-Henderson Hall, Virginia.

The technologies being developed — which will focus on the medium-weight Stryker brigades — will leverage a multi-layered architecture of communications networks. The new capability set was built off research and prototyping efforts that took place during Capability Set 21, which looked at a number of the same modernization goals.

The service has already begun testing new tech for Capability Set 23. One of the top efforts is known as the command, control, communications, computers, intelligence, surveillance and reconnaissance, or C4ISR, Electronic Warfare Modular Open Suite of Standards.

Many of the Army’s capabilities will be united under this CMOSS umbrella, said Brig. Gen. Robert Collins, program executive officer for Command, Control and Communications-Tactical, or PEO C3T.

CMOSS converges a number of the service’s warfighting capabilities — such as mission command, movement and maneuver, and fires — into one system.

“This is probably one of our marquee focus areas for CAPSET 23 — this is really where we are going to try to change the business model with industry,” Collins told reporters during the media day in May.

CMOSS is streamlining the integration of a number of capabilities into one platform, said Scott Newman, technical management division chief for project lead interoperability, integration and services at PEO C3T.

As part of the effort, the Army created the OpenVPX, a hardware form-factor computing system that attaches to the chassis of a Stryker vehicle and allows capabilities to be fielded in the form of processor cards.

“It’s very time consuming to pull something out of a vehicle and put new equipment in,” Newman said. What the service is doing with CMOSS is taking larger capabilities and making them into small cards. They are the “same type of capability, but as a card form factor, and then I can put it into a chassis,” he explained.

“Then, depending on the mission, I could change in and out different types of capabilities via cards,” Newman noted. “If I need radios, if I need [electronic warfare] capabilities, if I need mission command capabilities — I can plug and play different cards to give me that capability.”

When new technologies come out, instead of pulling out an entire technology kit from a vehicle, a card can be placed into the OpenVPX.

“From a sustainability standpoint, if things break, I don’t have to pull out that entire piece of kit, I can just pull up that card [and] put a new card in,” he said.

The electronic warfare community is already fielding products that are CMOSS complaint, he noted.

“We have a few activities going on this year where we’re demonstrating CMOSS,” Newman said. In May, the service was slated to test a number of capabilities including a radio, mounted mission command center and positioning, navigation and timing card inserted into the

OpenVPX during an exercise at Joint Base McGuire-Dix-Lakehurst, New Jersey.

“That is a precursor to going to Project Convergence in October … where we can operate in a GPS-denied environment and prove out that our PNT card is working properly,” he said.

Project Convergence is a campaign of learning during which soldiers will test a number of new capabilities related to the service’s Integrated Tactical Network initiative.

The CMOSS concept can be put into various types of systems. For example, the service is working with PEO Aviation as part of its acquisition effort, Newman said.

The Army is already looking toward Capability Set 25, the service’s next line of capability upgrades. It plans to pursue a number of radio capabilities, PNT and mission command systems, he said.

To do so, the service has teamed up with the Air Force and Navy to leverage the Sensor Open Systems Architecture Consortium to maintain and evolve CMOSS moving forward.

It is a commercial consensus-based industry standards body, Dirner said.

The group has more than 100 member organizations including government, academia, large defense contractors and small businesses, which allows nontraditional companies to better innovate and integrate their technologies into systems and concepts such as CMOSS.

CMOSS is “getting to be a fairly mature ecosystem that programs can take advantage of moving forward,” he added.

Interoperability and a common architecture are essential as the military works to develop a network of interconnected platforms that can rapidly transmit information to warfighters. This network — an “internet of things” for the military — will connect sensors and shooters through a concept called joint all-domain command and control, or JADC2.

In the future, platforms may be built around capabilities such as the OpenVPX chassis in the same way commercial vehicles are built today with the interoperability of smartphones in mind, Collins said. That is “a big focus area for not only CAPSET 23, but as we go to [CAPSET] 25 and beyond,” he said.

Another technology being researched, tested and developed as part of CAPSET 23 is the Modular Communications Node-Advanced Enclave, or MCN-AE, which will give soldiers the ability to communicate over secure networks, said Rob Tisch, product manager for network modernization at the project manager for tactical network office.

The MCN-AE augments an existing intelligence network, enabling users to connect to all of the same resources they have been using when employing the traditional standalone network, according to the Army.

Each MCN-AE fits into a suitcase-sized portable case, reducing the traditional systems’ size, weight and power requirements, according to the service.

Traditionally, soldiers performing tactical, intelligence and medical operations have been required to use separate communications networks to relay information. MCN-AE is helping the service converge these networks into one tactical network.

The Army is also looking to utilize commercial capabilities as it upgrades its comms.

When soldiers face longer communications ranges, they are reliant on a single geosynchronous connection, an Army official noted. In the future, the service wants to leverage multiple connections to add resiliency and reduce latency. In order to do so, the service is leveraging commercial capabilities and commercial constellations

“We’re evaluating a lot of those technologies through cooperative research and development agreements,” Welch said. “We’re employing them in our experimentation to understand the real impacts to the network of adding these capabilities.”

One of the devices the Army is using to support this effort is the SpaceX Starlink user terminal.

Starlink is a satellite internet constellation being constructed by SpaceX. It will consist of thousands of mass-produced small satellites in low-Earth orbit. Starlink is advertised as being ideal for internet users in remote and rural settings where access is often lacking.

The service will leverage the terminal during Project Convergence 2021 to explore what a diverse network can provide for the warfighter, Welch said.