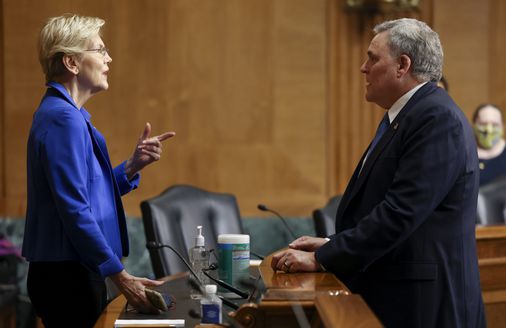 “If you said to somebody, ‘If you spend 40 bucks, I’m going to give you 140 bucks afterwards,’ that’s a pretty good investment,” said Representative Richard Neal of Springfield, chairman of the House Ways and Means Committee, which oversees the IRS.

But the nonpartisan Congressional Budget Office last year estimated a return of only $103 billion on a $40 billion infusion into the IRS. And some Republicans think the revenue projection in the bipartisan infrastructure proposal is too optimistic, part of a broader concern by some experts that the numbers in the plan don’t add up.

Those Republicans also are wary of giving more money to the IRS after the recent leak of 15 years’ worth of personal tax information to ProPublica showing the 25 wealthiest Americans paid only a tiny percentage of their fortunes in taxes, as well as longstanding GOP complaints that the agency is biased against conservative groups.

“I’m very concerned about and skeptical that that number is real,” said Representative Kevin Brady of Texas, the top Republican on the Ways and Means Committee. He said past estimates of the difference between how much Americans owe in taxes and how much they actually pay — known as the tax gap — have been based on old data and are “very wild guesses.”

The Wall Street Journal’s conservative editorial board recently criticized the proposed IRS funding boost and its forecast of a net return of about $100 billion — $140 billion minus the extra $40 billion in spending — over the next 10 years.

“Congress would do less economic harm by dropping the provision to harass honest taxpayers by supersizing the IRS and simply adding the $100 billion to the deficit,” the editorial said. “The revenue is probably a bipartisan illusion in any case.”

But nonpartisan experts said the IRS revenue gain in the infrastructure proposal is possible, depending on how quickly the agency could hire more employees, get them trained, and improve its technology.

“It does seem in the window of reasonableness,” said Garrett Watson, senior policy analyst at the Tax Foundation, a Washington think tank, noting the complexity of determining how much money in unpaid taxes exists. “It’s always tricky to estimate something you can’t see.”

No one disputes the stark decrease in staffing at the IRS since 2010, even as its responsibilities have increased with new tax provisions in the Affordable Care Act and the distribution of three rounds of pandemic stimulus checks and a major expansion of the child tax credit.

The extent of the problems became clear on Wednesday with the release of a report by the agency’s independent national taxpayer advocate. It said the IRS closed the filing season in May with a backlog of more than 35 million unprocessed tax returns, over three times what it had in 2020, and only 3 percent of the 85 million calls to its most popular toll-free assistance phone number reached a live person.

The Congressional Budget Office analysis last year found that funding for the IRS fell 20 percent in inflation-adjusted dollars from 2010 to 2018, leading to a reduction of nearly a quarter of the agency’s staff. The number of employees working on enforcement fell to about 6,500 from about 23,500 over the past decade, IRS Commissioner Charles Rettig recently told Congress. The IRS spent $12.3 billion in 2020 and had about 76,000 full-time employees.

Republicans took aim at the IRS budget after gaining the majority in the House of Representatives in 2011 in part because of the agency’s role in the Affordable Care Act. Republicans also were angered by unfair treatment by the IRS of conservative groups seeking tax-exempt status. The Justice Department reached a settlement with dozens of those groups in 2017 after they sued the IRS and the agency apologized.

Rettig, who was nominated by then-president Donald Trump in 2018, said at a Senate Finance Committee hearing in April that the annual tax gap could exceed $1 trillion, much larger than the nearly $600 billion the Treasury Department had estimated in 2019. The agency needs more resources to keep up with people and corporations that are evading taxes, he said.

“We do get outgunned,” Rettig said. “I mean, there’s no other way to say it.”

The same ProPublica investigation that has some Republicans concerned about privacy has those who want to crack down on tax dodgers apprehensive about whether the IRS can ever match the resources of billionaires and corporations eager to evade paying all that they owe.

“There’s a sort of race between the IRS and taxpayers,” said Janet Holtzblatt, a senior fellow at the Urban-Brookings Tax Policy Center, a Washington think tank. “Can the IRS keep up?”

The situation has gotten so bad that five former Treasury secretaries, including Democratic appointee Larry Summers and Republican appointee Henry M. Paulson Jr., wrote an opinion article in June calling for Congress to give the IRS more resources, which they said would “raise significant revenue and create a fairer, more efficient” tax system.

“There’s definitely recognition that the IRS needs more money,” said Nina Olson, who served as national taxpayer advocate from 2001 to 2019 and now heads the nonprofit Center for Taxpayer Rights. “It’s not unreasonable to say, at the margins, for every dollar you invest in the IRS you would get back $4.”

That’s the same equation Biden used in his proposed American Families Plan legislation, which projects that $80 billion in additional IRS spending will generate about $320 billion in revenue. The bipartisan infrastructure bill roughly cuts those figures in half.

“We’re going to pay for these investments, in part, by giving the Internal Revenue Service the resources it needs to collect taxes on the wealthiest Americans who owe but are currently not paying under the existing tax rules,” Biden said in pitching the infrastructure plan in La Crosse, Wis., on Tuesday.

The plan has the advantage of increasing tax revenue without raising tax rates, which is how politicians usually define a tax hike.

“I think that it’s very important that before you ask people to pay more that you convince them that everybody’s paying their fair share,” Neal said. But he said the IRS faces two challenges: upgrading its outdated technology and hiring experienced people “who actually understand what aggressive tax avoidance means.”

Holtzblatt said the fourfold return on additional IRS spending would come only after upgraded technology was in place and new employees were trained. It can take up to five years to hire and train someone to be an IRS revenue officer, she said, but that time could be cut in half if the agency could lure mid-career tax professionals to work for the government.

“Right now, it’s very difficult for the IRS, with its very limited resources, to outgun the teams of advisers the wealthy and big corporations can afford to bring in,” Holtzblatt said. “I’m confident that providing the IRS with more money for enforcement will more than pay for itself. The question is how much will it pay for itself.”

Amazon is freezing corporate hiring in its retail business for the rest of the year, according to an internal announcement obtained by The New York … END_OF_DOCUMENT_TOKEN_TO_BE_REPLACED

Last week, Idaho Gov. Brad Little announced the appointment of Alberto Gonzalez as the new administrator for the Office of Information Technology … END_OF_DOCUMENT_TOKEN_TO_BE_REPLACED