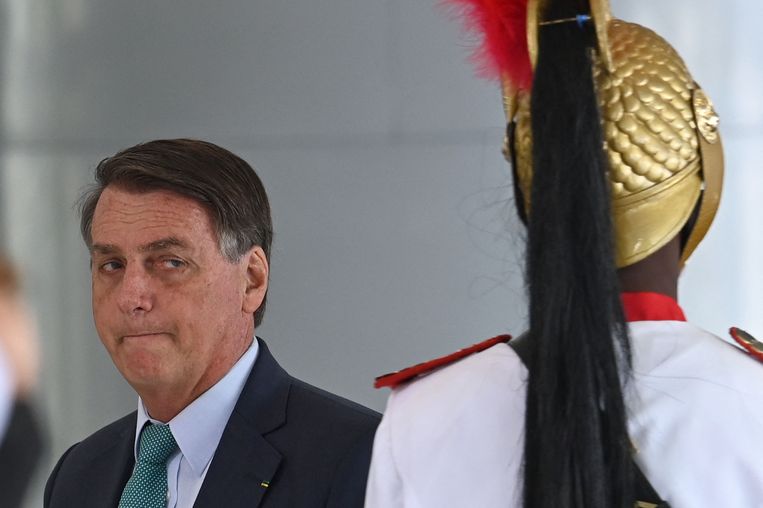 Brazilian President Jair Bolsonaro last weekend in the capital, Brasilia, during a reception for the visiting Cape Verdean president.AFP photo

President Jair Bolsonaro looks over the heads of a six-foot group of supporters and shouts: “I don’t understand, why all the resistance?” He told his supporters in the garden of the presidential palace Alvorada in the capital, Brasilia, on Tuesday that his crusade against the computers with which Brazil selects its politicians since 1996 is motivated only by noble democratic motives. He doesn’t really have anything against the institutions, against the Electoral Tribunal (TSE) and the Supreme Court – but the president of the TSE, Luis Roberto Barroso, he says, is trying to impose his will on the Brazilian people. His audience nodded in approval.

Politician Bolsonaro feeds on enemies, people with a name and a face, who can be attributed to a variety of vague intentions. He makes it clear to the world: the president versus his opponents. In this sense, he is not fighting with the Brazilian democracy support system since the end of military rule in the mid-1980s, but with a man, in this case, Judge Barroso, who would offend Brazil. As Bolsonaro plays on the person, the regime looks for a response to the president’s sabotage attacks.

His latest struggle with the rule of law (the 1,000th issue of a long series) has to do with the reliability of electronic voting. With more than a year to go until the presidential election, Bolsonaro has been raising unfounded doubts about the electoral system for several months. He is lagging more and more in the polls compared to his leftist rival, former President Lula da Silva. Lula made a surprising return to the political scene this spring after the Supreme Court overturned a series of corruption convictions against him. The leader of the Labor party, Labor, will get twice as many votes as Bolsonaro in the second round, according to opinion polls.

If you can’t win if you play by the rules, you can always attack the game itself. Bolsonaro claims that computers will be vulnerable to fraud based on “indicators”. He warned that elections cannot take place without ballot papers. The strategy appears to have been individually copied from the example of US President Donald Trump, who still claims that Democrats ‘stole’ the elections, even though Bolsonaro made similar statements as a member of Congress six years ago.

Initially, the Electoral Court required the president to present evidence. This week, after Bolsonaro’s clues were not forthcoming, I moved on to heavy artillery. The court is investigating the possible abuse of power by the head of state. In addition, the institute has asked the Supreme Court to investigate whether Bolsonaro can be sued for spreading false news. “The system is resisting,” says political scientist Nao de Azevedo of the University of Brasilia. “The judges are trying to draw a line: this far and no further.”

Brazil is drifting into new waters chased by a populist who always seeks to stir up controversy. Never before, says de Azevedo, has the Electoral Tribunal questioned a president. Never before, says the court that monitors the legality of elections, has this been necessary. In a joint statement earlier this week, President Barroso and his predecessors – since the establishment of the court in 1988 – denied the allegations. The judges say the Electoral Tribunal has just managed to put an end to a long history of fraudulent elections. Voting computers helped with this for 25 years: “Since then, no case of fraud has been observed.”

Barroso had all of his predecessors sign the letter in an effort not to be hit by Bolsonaro’s quicksand. In vain, he had already drowned in it up to his neck. For a day later, the chief stood there again, wondering aloud why the people resisted so hard. He himself gave the answer: President Barroso and his personal mission against Brazil. Just think: Barroso was one of the top judges to reverse the convictions against Lula. “The same people who released Lula will be counting and checking votes next year.”

Political scientists such as de Azevedo look on in bewilderment. Once again, Bolsonaro has managed to divert media attention to him. “It works every time. Great strategy: as long as they talk about it. The phone conversation they had with him de Volkskrant supports his point of view. Bolsonaro’s provocations distract from all those other things that affect him in his popularity: a parliamentary committee investigating his government’s failed coronavirus policies and exposing corrupt vaccine deals; High unemployment, declining economy, rapid inflation is making life more expensive for everyone.

So far, the president has weathered every crisis by creating new ones each time. Following Trump’s lead, rival Lula took a closer look at Biden’s campaign last year. Amidst Bolsonaro’s struggle with the country’s democratic institutions, Lula is urging his Twitter followers to wear masks. “I am not asking for my sake, but for you.” He doesn’t have to mention his opponent’s name to remind Brazil of the 560,000 dead.

Drawing the American comparison, he will stop before Bolsonaro after the next election. In theory, electoral investigations and the Supreme Court could disqualify Bolsonaro even before the election. Parliament can also decide to impeach him temporarily. But the speaker of parliament, who can move the case, is a political ally of the president. De Azevedo says that Brazil is Brazil. “Anything can happen, even nothing.”

[ad_1] Superconducting quantum computers are huge and incredibly finicky machines at this point. They need to be isolated from anything that might … END_OF_DOCUMENT_TOKEN_TO_BE_REPLACED