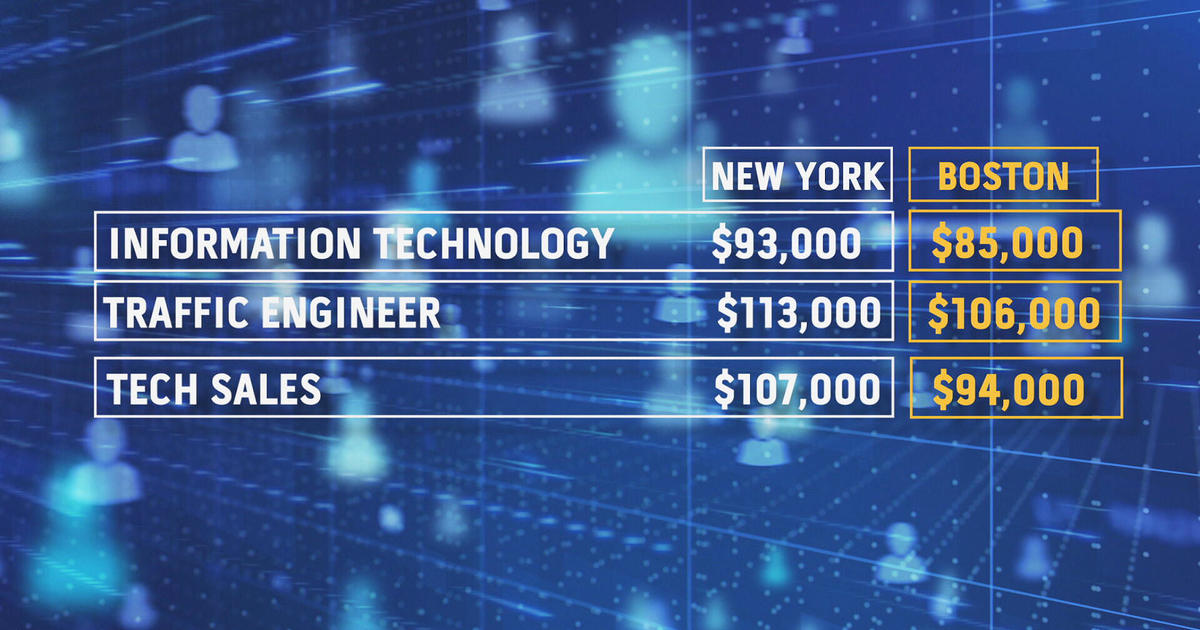 BOSTON – New York City has long been known for crazy rent prices, but Boston is catching up.

Just ask anyone in Southie, the hottest neighborhood for the 20-something crowd just starting their careers.

“Rent cost like a million dollars,” one woman told WBZ-TV while walking her dog near the L Street Bathhouse.

So how do Boston salaries stack up against those in New York? We compared several on Salary.com.

“I don’t think they [employers] have been able to keep up with the cost-of-living changes that have rapidly impacted employees,” explained Elaine Varelas of Keystone Partners, a career management firm in Boston.

But according to Varelas, staffing shortages have forced some companies to pay a premium to new hires to fill empty positions.

“So new hires are seeing the increase in pay. The challenge with that is employees that are staying with their organization are not seeing raises,” she said.

So what do you do when you find out the new hire working in the cubicle right next to you makes more money?

Varelas’ advice is to research the pay for your current job and then ask your manager this: “If you were going to fill my job, you would pay 15% more than what I am making. I’m not asking for 15%, but I need more than the cost of living,” she said.

Another Southie resident we talked to knows all too well how those cost of living increases don’t make much of a difference.

“I technically got a market adjustment for cost-of-living, but I didn’t even notice a difference in my paycheck,” she said.

There’s always the option to search for a New York based job that allows remote work, that way you can stay in Boston and still earn that New York salary.

And it’s now easier than ever to compare salaries across the two cities. New York just passed a law requiring employers to post salary ranges on job postings.

Marion Technical College has wrapped up its month-long UpSkill-A-Thon competition. MTC collaborated with Microsoft Philanthropies to launch the … END_OF_DOCUMENT_TOKEN_TO_BE_REPLACED

Knox College is currently responding to a system disruption caused by ransomware. A statement provided Friday by Knox College Vice President of … END_OF_DOCUMENT_TOKEN_TO_BE_REPLACED