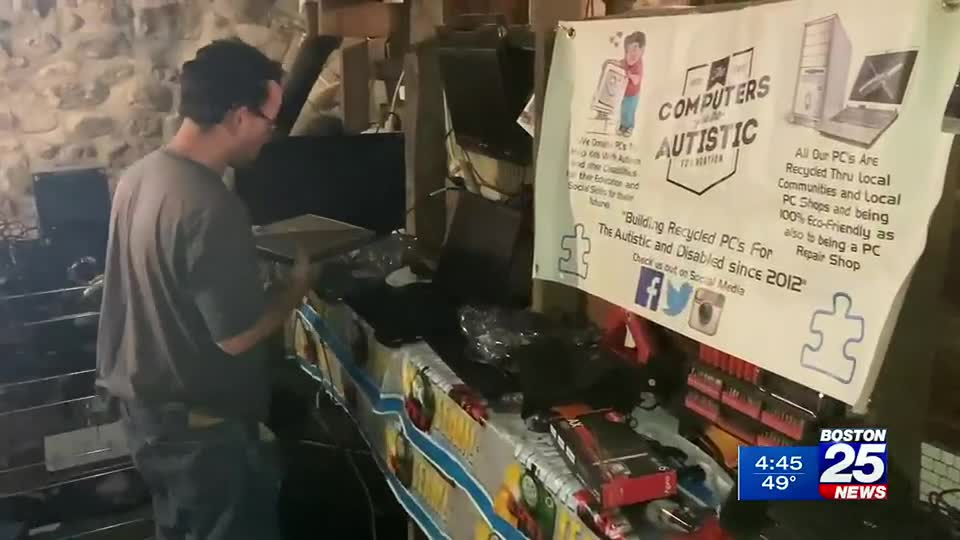 BRAINTREE, Mass. — April is World Autism Month. A South Shore man is making a big difference in the lives of many children who have autism. He’s doing it through technology and in a unique way.

27-year-old Chris Hall tools around Braintree in his solar-powered electric bicycle, or ELF. That stands for electric, light, and fun. But there’s a serious need for his mode of transportation.

“Having the ability to be autistic and to be able to get out into the world and socialize is a big thing because a lot of people with autism have difficulty with that,” Hall said.

Hall, who has autism, repairs computers and then donates them to children with autism. In 2012 he launched Computers for the Autistic Foundation as a way to give back.

Hall works with several computer shops along the South Shore, including New Age Computer Service in Braintree, that donate old computers for Hall to refurbish.

“Working alongside Chris to take used computers, old computers, instead of just recycling them and actually using them, is much better both for the environment and the kids who need them, and working with Chris is fantastic,” said Mark Peterson, owner of New Age Computer Service.

Hall said he got the idea to start his foundation after he was given a donated computer as a child. Now he returns the favor by picking up and delivering the computers in his ELF.

“It allows me to actually be able to have a conversation with people because when people see this vehicle it’s like nothing they’ve ever seen before. It’s like I’m driving the Jetsons or something,” he said.

So far, Hall has refurbished and donated about 45 computers to children with autism. He also refurbishes certain iPhones, iPads, and Android phones and tablets.

If you’d like to donate a computer to the foundation, here is the link.