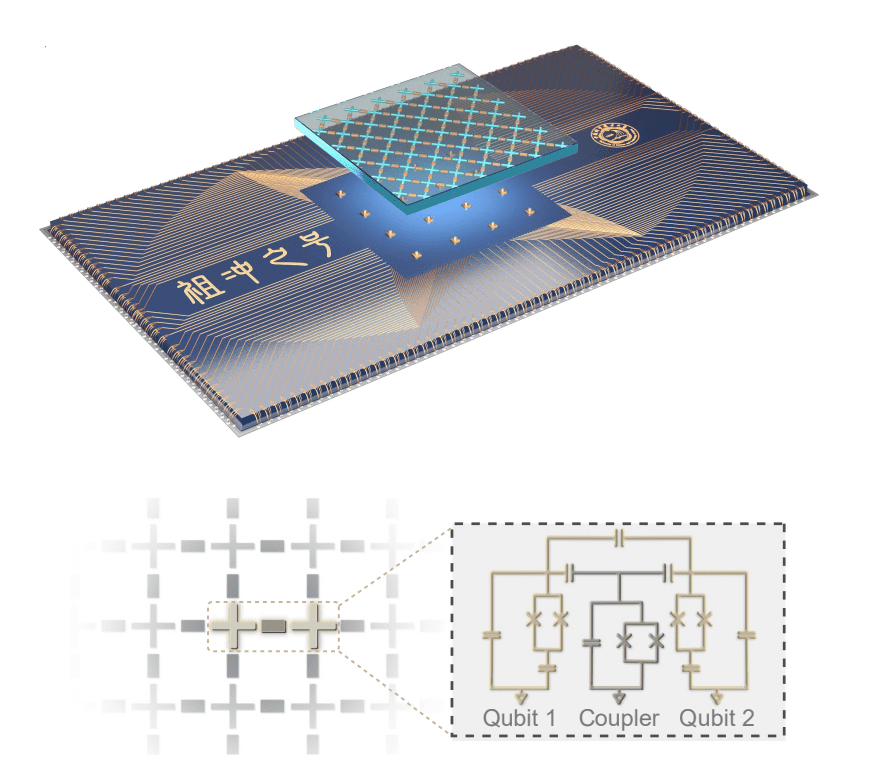 Credit: The University of Science and Technology of China.

Researchers in China have demonstrated the most powerful quantum computer in the world, a 56-qubit machine that can perform operations orders of magnitude faster than Google’s quantum computer — its closest competitor. The Chinese quantum computer completed a complex calculation in a little over an hour, a task that would take a classical supercomputer eight years to perform.

The task performed by the new Zuchongzhi quantum computer is yet another demonstration of “quantum supremacy”.  The mythical-sounding term describes crossing the threshold where quantum computers can do things that conventional computers cannot in a reasonable timeframe.

Digital computers require data to be encoded into binary digits (bits), each of which is always in one of two definite states (0 or 1), whereas quantum computers use qubits, also known as quantum bits, that can exist in multiple states simultaneously.

Rather than superconducting materials on a chip, Jiuzhang uses optical circuits that perform calculations using photons instead of a flow of electrons as used by Google’s Sycamore. Jiuzhang performed a complex task in 200 seconds that would have taken the fastest Chinese supercomputer, TaihuLight, around 2.5 billion years to arrive at the same result.

However, Jiuzhang is a one-trick pony. It’s a specialized device that can’t be programmed to perform any other task. So in many ways, Google’s machine was much more practical despite the fact that Jiuzhang was much faster at completing its specialized task.

Credit: University of Science and Technology of China.

Now, researchers in China have demonstrated a much more versatile 66-qubit quantum computer, known as Zuchongzhi. The machine was developed by a team led by Jian-Wei Pan at the University of Science and Technology of China in Shanghai and has 11 rows and 6 columns of qubits forming a two-dimensional rectangular lattice pattern.

Zuchongzhi used 56 of its qubits to complete a random quantum circuit sampling task, which the researchers call an “outstanding candidate to demonstrate quantum computational advantages.” The idea is that this task is far too complex for a classical computer to solve in a reasonable timeframe and around 100 times more challenging than the one solved by Sycamore — but Zuchongzhi was up for it.

Zuchongzhi finished the sampling in 1.2 hours with just 56 qubits. This shows that the two-qubit edge over Sycamore matters a lot. Every additional qubit makes the quantum processor exponentially more powerful, which is why all of these advances are such a big deal.

“We estimate that the classical computational overhead to simulate Zuchongzhi is 2-3 orders of magnitude higher than the task implemented on Google’s 53-qubit Sycamore processor. Therefore, our experiment unambiguously established a computational task that can be completed by a quantum computer in 1.2 hours but will take at least an unreasonable time for any supercomputers,” the Chinese researchers wrote in the pre-print server ArXiv.

[ad_1] Superconducting quantum computers are huge and incredibly finicky machines at this point. They need to be isolated from anything that might … END_OF_DOCUMENT_TOKEN_TO_BE_REPLACED