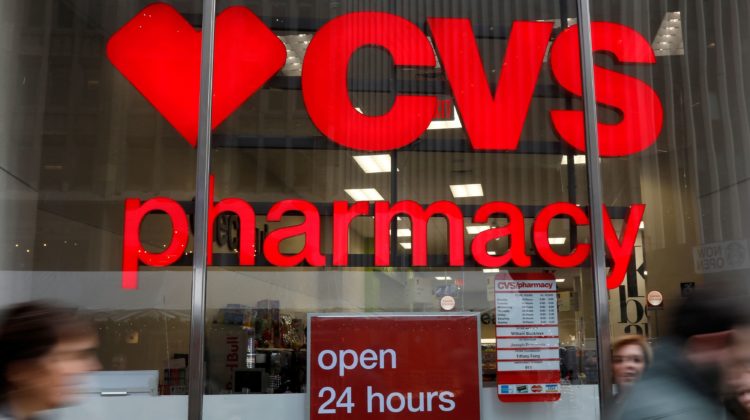 People walk by a CVS Pharmacy store in the Manhattan borough of New York City.

Shares of the company were up slightly in premarket trading.

Here’s what the company reported for the fiscal fourth quarter ended Dec. 31, compared with what analysts were expecting, based on a survey of analysts by Refinitiv:

The drugstore chain reported fiscal fourth-quarter net income of $975 million, or 75 cents per share, down from $1.74 billion, or $1.33 per share, a year earlier.

For CVS, the pandemic has brought benefits and downsides. On the one hand, the global health crisis has caused some people to skip trips to the store and doctor’s office. That has weighed on its front-of-store sales and led to fewer new prescriptions. On the other hand, it has given the drugstore a chance to show off the convenient health-care services it provides, such as telemedicine and its Minute Clinic, and gain new business opportunities like drive-thru testing.

Same-store sales grew 5.3% during the three-month period compared with the same time a year earlier. They jumped by 7.5% in the pharmacy division, as prescription volume rose but were down by 1.8% in the front of store, as customers cut back on visits and did not need to buy as much flu and cold medication during the pandemic.

CVS is taking on a larger role in the administration of Covid vaccines at its stores. Last week, the federal government shipped doses directly to retail pharmacies’ stores — including CVS locations in 11 states.

On a Tuesday call with investors and analysts, CVS Chief Executive Karen Lynch said about 8 million consumers came to CVS for the first time because of Covid testing. She said it anticipates it will reach millions of new customers with Covid vaccines, too.

“We will use this opportunity to shape a health experience that demonstrates the value we bring,” she said. “It will create the opportunity to expand our customer base while deepening relationships with current customers.”

She described the federal program with CVS and other pharmacies as “the linchpin of the Biden administration’s plan to vaccinate 300 million Americans by the end of the summer.” She said CVS has the capacity to administer 20 million to 25 million doses per month, depending on supply.

CVS said it has administered about 15 million tests nationwide. It has also given more than 3 million Covid vaccines in over 40,000 long-term care facilities.

The drugstore chain and its competitor, Walgreens, struck a deal with the federal government in October to provide the shots to staff and residents at nursing homes and assisted living facilities. It began vaccinations in December and plans to complete both doses at the long-term care facilities in mid-March.

Lynch said the chain will accelerate investments in a wider range of services, beyond just filling prescriptions, to lower costs and make care easier for patients. She pointed to a program that brings kidney dialysis services into the home to reduce hospital admissions and an oncology program that matches people to clinical trials.

Next year, she said the company will re-enter the individual public exchange created by the Affordable Care Act, which allows people to buy their own health insurance plan. She said it will be the company’s first branded CVS Health Aetna product. CVS acquired the health insurer in 2018.

“No matter what the headlines have been, no matter how the market’s turned, we always tend to find bookings rebounding fastest, soonest and greatest … END_OF_DOCUMENT_TOKEN_TO_BE_REPLACED

The New York Times Company said on Thursday that it would not voluntarily recognize a newly formed union of tech and digital employees, instructing … END_OF_DOCUMENT_TOKEN_TO_BE_REPLACED