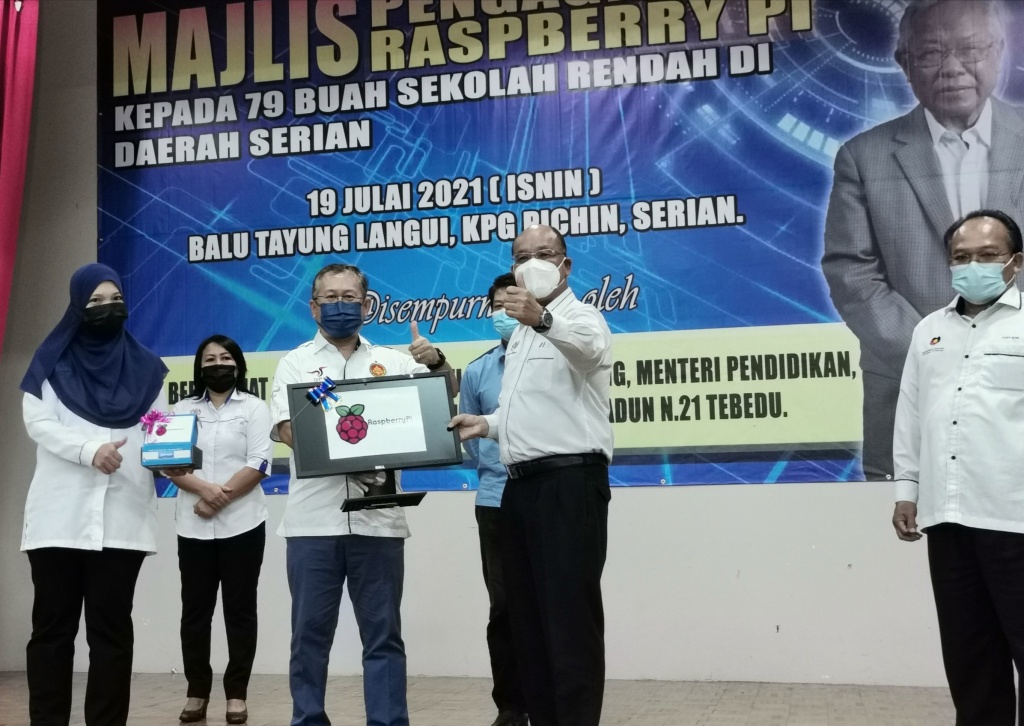 Martin (third left) on behalf of Manyin performs the symbolic handing-over of the device to Charlie. Also in the photo is Azizah (left).

SERIAN (July 20): The provision of Raspberry Pi computers to all 1,265 primary schools in Sarawak is now being carried out in three batches spanning May to December this year, said Education, Science and Technological Research Minister Datuk Amar Michael Manyin Jawong.

He explained the project is funded by the state government through an allocation of RM12 million under Projek Rakyat to cover the cost of these devices and training for identified school personnel on basic operation of the computers.

He also said each primary school is given between three and 25 units of computers depending on its population.

“Batch 1 of the project covers 344 schools, mostly in the rural or interior, for instance, schools under PPD (district education offices) of Baram, Belaga, Kapit, Song and Daro.

“As at July 9, Batch 1 has achieved 98 per cent completion and Batch 2 started its delivery process on July 12,” he said.

The text of his speech was read by Kedup assemblyman Martin Ben who represented Manyin at the symbolic presentation of Raspberry Pi computers to 79 schools under Serian district at Tayung Langui Hall, Kampung Pichin yesterday.

Manyin revealed that all of the Raspberry Pi computers ordered by the government come complete with monitor, keyboard and mouse.

He said the hardware is covered by a three-year manufacturer’s warranty and support service and 24/7 help desk support by Sarawak Information Systems Sdn Bhd (Sains).

“The Raspberry Pi computers have a unique function called ‘Internet-in-a-box’ that can enable wireless action point with pre-loaded learning content.

“It works as an intranet network and ensures learning can still happen even at places where there is no internet connectivity,” he added.

Manyin pointed out this initiative is embarked by the state government, through the Ministry of Education, Science and Technological Research (MESTR), to equip all primary schools in Sarawak with computer facilities.

According to him, this initiative is in line with the state’s digital economy agenda whereby the government strongly encourages mastery of digital skills amongst the younger generations, as early as primary school.

“Early exposure to computers and ICT enables school pupils to be proficient with computers, to be taught computer-based technology and to be exposed to the digital world from an early age,” he said.

For Serian, Manyin said the 79 primary schools under Serian District Education Office will benefit from this project through an allocation of 507 units of Raspberry Pi computers under Batch 2, including a unit for the PPD office.

Martin in his personal remarks hoped the schools will make full use of these new devices.

He also said efforts are ongoing by both the state and federal governments to improve telecommunication coverage in the rural and interior parts of Serian.

Meanwhile, Sarawak Education Department senior assistant director Azizah Mohamad Bee who represented the director said the department is appreciative of the state government’s initiative to provide Raspberry Pi computers to all primary schools in the state.

She said this initiative is in line with the aspirations of the Malaysia Education Blueprint 2013-2025 to maximise use of ICT.