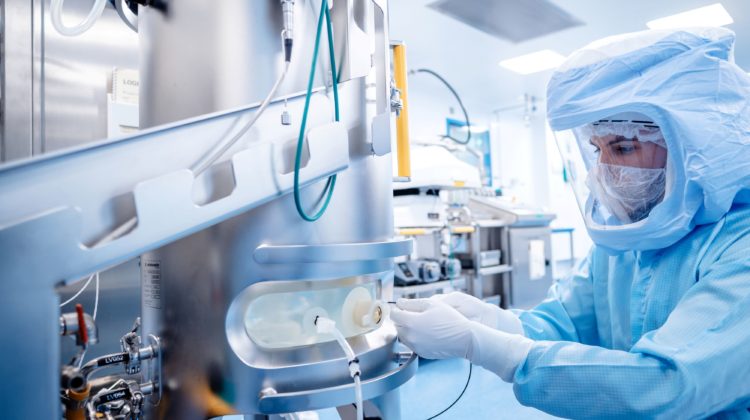 A handout image shows the manufacturing process of the Pfizer-BioNTech COVID-19 vaccine with the execution of the first step with the active pharmaceutical ingredient mRNA at a production facility in Marburg, some 90km north of Frankfurt, Germany.

Rep. Diana DeGette, D-Colo., said “the amount of supply has fallen short of expectations” as lawmakers pressed Pfizer and Moderna executives on why they missed early U.S. delivery targets of their vaccines.

Pfizer CEO Albert Bourla said in October that the company could deliver between 30 and 40 million doses by the end of the year, but the company only met the lower end of that goal last week, DeGette said at a hearing before the House Committee on Energy and Commerce.

“We did initially experience some problems with the initial ramp up of our vaccine,” Pfizer Chief Business Officer John Young testified at the hearing. “In common with other panelists here, we’ve been in the process of developing a manufacturing process for a vaccine product that we’ve never made before.”

Young said shortages of some raw materials were among the early production constraints, but added that the company is on track to deliver 300 million doses of the two-shot vaccine before the end of July.

“We ultimately had never, when we were trying to make those estimates, manufactured doses at this scale,” Hoge said at the hearing. “We had a lot to learn along the way, and many of the challenges that we ran into were the normal sort of training experiences as you train people to operate a complicated process.”

He added that the company is “very pleased” with its current production rate, noting that it delivered 9 million doses last week and is on track to double its current pace of production.

Manufacturers of other vaccines, which have not yet been authorized by the U.S. Food and Drug Administration, also testified about their preparedness to quickly provide doses upon regulatory authorization in the U.S.

Johnson & Johnson‘s Vice President of Medical Affairs Dr. Richard Nettles said that, if authorized for use in the U.S., the company plans to ship more than 20 million doses to the U.S. by the end of March. An FDA panel is meeting on Friday to review data of the one-shot vaccine and it could be authorized as soon as this week.

Dr. Ruud Dobber, president of AstraZeneca’s biopharma business, testified that the company expects to hear back on regulatory authorization from the FDA in early April regarding its two-shot vaccine. He said the company has manufactured enough doses to “release instantly 30 million doses” and up to 50 million by the end of the month. The company will then produce between 15 million and 25 million doses every month until its obligation of 300 million doses is met, Dobber said.

And John Trizzino, Chief Commercial Officer of Novavax, said his company is ready to send 100 million doses of its Covid-19 vaccine by the end of June as soon as it wins emergency approval.

The executives said they believe the currently available vaccines are still effective against the emerging threat of new mutated variants of the coronavirus, but they’ve all begun to test or prepare to test booster shots to specifically target them.

The FDA released new guidance on Monday to clarify to vaccine makers what the regulatory process will look like for potential Covid-19 booster shots that are designed to target new variants. The agency said it won’t require lengthy clinical trials, but instead will allow companies to apply for amendments to their existing emergency use authorization applications.

“We have been in productive conversations with the FDA,” Moderna’s Hoge said. “Ultimately, they have the responsibility to set the bar and make recommendations on whether the vaccine is effective and safe against those new variants, but we are hopeful that we will be able to do it without large, randomized phase three trials.”

Pfizer’s Young echoed Hoge, saying that the process should resemble “more of a seasonal flu-like process,” meaning that a smaller number of patients are required to participate in the clinical trials.

April 30, 2021 — Back in 2014, when researchers affiliated with Drexel University’s University Research Computing Facility (URCF) were deciding the … END_OF_DOCUMENT_TOKEN_TO_BE_REPLACED

John Woollam, CEO of Cloud VoIP provider Euphoria Telecom Many people ditched their home landlines long ago. In a world where everyone carries … END_OF_DOCUMENT_TOKEN_TO_BE_REPLACED

MOSCOW, April 28. /TASS/. The international information security will be a topic for discussions at the summit between Russian and US Presidents … END_OF_DOCUMENT_TOKEN_TO_BE_REPLACED