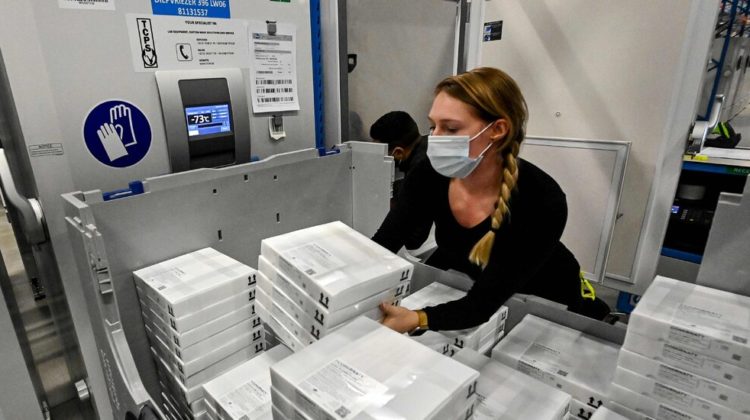 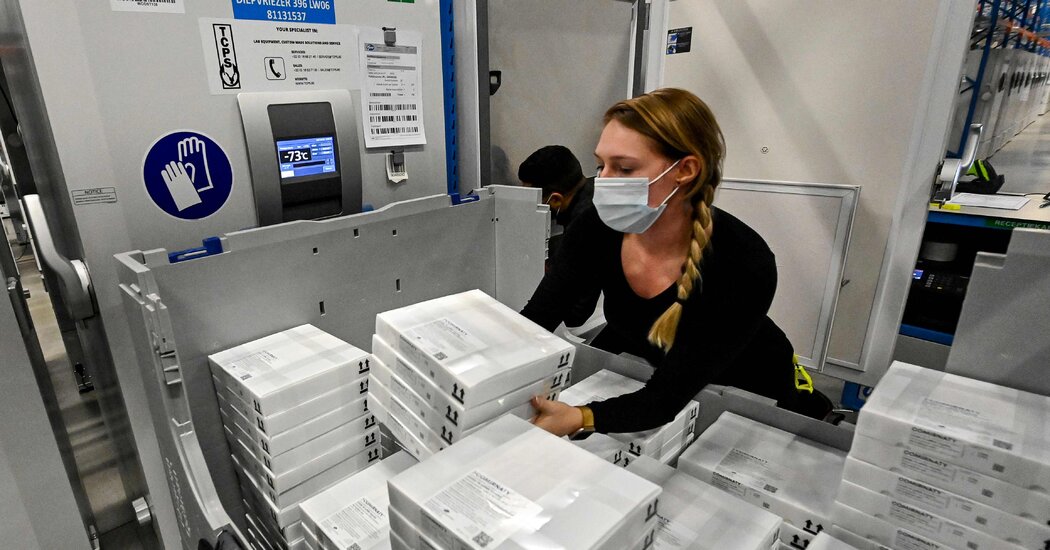 BRUSSELS — The European Union is finalizing emergency legislation that will give it broad powers to curb exports for the next six weeks of Covid-19 vaccines manufactured in the bloc, a sharp escalation in its response to supply shortages at home that have created a political maelstrom amid a rising third wave on the continent.

The draft legislation, which is set to be made public on Wednesday, was reviewed by The New York Times and confirmed by two E.U. officials involved in the drafting process. The new rules will make it harder for pharmaceutical companies producing Covid-19 vaccines in the European Union to export them and are likely to disrupt supply to Britain.

The European Union has been primarily at loggerheads with AstraZeneca since it drastically cut its supply to the bloc, citing production problems in January, and the company is the main target of the new rules. But the legislation, which could block the export of millions of doses from E.U. ports, could also affect the Pfizer and Moderna vaccines.

Britain is by far the biggest benefactor of E.U. exports and will stand to lose the most by these rules, but they could also be applied to curb exports to other countries like Canada, for example, the second-largest recipient of E.U.-made vaccines, as well as Israel, which gets doses from the bloc but is very advanced in its vaccination campaign and therefore seen as less needy.

“We are in the crisis of the century. And I’m not ruling out anything for now, because we have to make sure that Europeans are vaccinated as soon as possible,” Ursula von der Leyen, president of the European Commission, said in comments last week that paved the way for the new rules. “Human lives, civil liberties and also the prosperity of our economy are dependent on that, on the speed of vaccination, on moving forward.”

The legislation is unlikely to affect the United States, which has so far received fewer than one million doses from E.U.-based facilities.

The Biden administration has said it has secured enough doses from its three authorized manufacturers — Pfizer-BioNTech, Moderna and Johnson & Johnson — to cover all adults in the country by the end of May. The overwhelming bulk of that supply is coming from plants in the United States. The country also exports vaccine components to the European Union, which is reluctant to risk any disruption to the supply chain of raw materials.

The European Union allowed pharmaceutical companies to fulfill their contracts by authorizing them to export more than 40 million vaccine doses to 33 countries between February and mid-March, with 10 million going to Britain and 4.3 million to Canada. The bloc has kept about 70 million at home and distributed them to its 27 member nations, but its efforts to mount mass vaccination campaigns have been set back by a number of missteps.

Exporting liberally overseas when supply at home is thin has been a key part of the problem, and the bloc has come under criticism for permitting exports in the first place, when the United States and Britain practically locked up domestic production for domestic use through contracts with pharmaceutical companies.

The outcome has been a troubled vaccine rollout for the world’s richest group of nations. The impact of the failures is being exacerbated by a third wave that is sending health care systems across the continent into emergency mode and ushering in painful new lockdowns.

The European Commission, which ordered the vaccines, and individual governments in member states responsible for their national campaigns have come under severe criticism for their failures by voters tired of lockdowns and growing Covid-19 caseloads. Public anger and its political cost have grown as the bloc has fallen behind several rich world peers in advancing vaccination campaigns despite being home to major manufacturers.

The bloc has seen recipients of vaccines produced in its member countries, as well as in other rich nations, race ahead with their inoculation campaigns. Nearly 60 percent of Israelis have received at least one vaccine dose, 40 percent of Britons and a quarter of Americans, but only 10 percent of E.U. citizens have been inoculated, according to the latest information published by Our World in Data.

The export curbs are being pushed through by the European Commission, the executive branch of the European Union, and while changes to the new rules could still take place before the law is finalized, officials said it was unlikely they would be substantive. They are expected to be put into force swiftly.

E.U. officials said the rules would allow a degree of discretion, meaning they won’t result in a blanket ban on exports, and the officials still expected many exports to continue.

“Minister Ng’s counterparts have repeatedly assured her that these measures will not affect vaccine shipments to Canada,” Ms. Han said. She added, “We will continue to work with the E.U. and its member states, as we have done throughout the pandemic, to ensure that our essential health and medical supply chains remain open and resilient.”

Canada depends on the European Union for nearly its entire vaccine supply: All of Canada’s Moderna and Pfizer vaccines have come from Europe, though the country received a small shipment of the AstraZeneca vaccine from India.

The new rules come after months of escalating tensions between the European Union and AstraZeneca, in a situation that has become toxic for the bloc’s fragile relations with its recently departed member, Britain.

The trouble began in late January, when AstraZeneca told the bloc it would cut its deliveries by more than half in the first quarter of 2021, upending vaccine rollout plans. In response, the European Union put in place an export-authorization process, requiring pharmaceutical companies to seek permission to export vaccines and giving the European Union the powers to block them if they were seen as running counter to a company’s contractual obligations to the bloc.

Since Feb. 1, the European Union blocked only one out of more than 300 exports, a small shipment of AstraZeneca vaccines to Australia, on the grounds that the country was nearly Covid-free while the bloc was struggling with rising infections.

The new rules will introduce more grounds to block exports, the draft documents show. They will encourage blocking shipments to countries that do not export vaccines to the European Union — a clause clearly targeting Britain — or to countries that have “a higher vaccination rate” than the European Union “or where the current epidemiological situation is less serious” than in the bloc, according to the wording seen by The Times.

In recent days, Prime Minister Boris Johnson of Britain has sought to strike a conciliatory tone in a bid to avert an E.U. export ban that would deliver a major blow to his country’s fast-advancing vaccination campaign.

At a news conference on Tuesday, Mr. Johnson said he was opposed to blockades, and was “encouraged by some of the things I’ve heard from the continent.” The British news media reported that his government would be prepared to let the bloc have four million AstraZeneca doses produced at an E.U.-based factory.

After ‘The Voice’ and BET, two Mississippians give one last concert before heading to L.A. Published 6:45 am Monday, January 30, 2023 … END_OF_DOCUMENT_TOKEN_TO_BE_REPLACED

Despite increasing layoffs across the country, demand for IT pros remains high, especially for software developers and senior software … END_OF_DOCUMENT_TOKEN_TO_BE_REPLACED