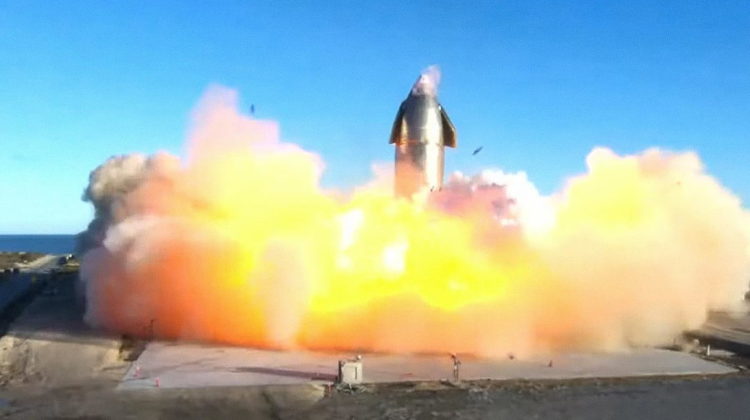 To date, SpaceX has sent two similarly designed prototypes of its next-generation Starship rocket on high-altitude test flights, but both ended in spectacular explosions when they failed to land properly.

Now the company is hoping it’ll be a case of third-time-lucky as it preps the rocket’s next launch, which could take place in the coming days.

But Elon Musk isn’t exactly brimming with confidence about the chances of success with Starship’s upcoming test flight, tweeting recently it only has a 60 percent chance of ending the mission in one piece.

The first high-altitude test flight in December 2020 saw the Starship SN8 prototype reach an altitude of around 40,000 feet before descending back to Earth minutes later for a controlled landing, similar to those achieved on a regular basis by SpaceX’s workhorse Falcon 9 rocket.

On its way back to terra firma, the SN8 achieved an important “landing flip” maneuver in preparation for its upright touchdown, but despite its thrusters helping to it slow down, the rocket hit the ground way too hard, causing it to explode on impact.

Still, Musk wasn’t too upset, tweeting shortly after the crash: “We got all the data we needed!” adding, “Congrats SpaceX team hell yeah!”

In early February, the SpaceX team had another go at launching and landing what should one day be a reusable rocket, but again, the final stages of the SN9’s descent were just too unstable, resulting in another fiery end for the 160-foot-tall booster.

“We had, again, another great flight up,” SpaceX engineer John Insprucker said shortly after the mishap, adding dryly, “We’ve just got to work on that landing a little bit.”

The private space company points out that such accidents aren’t unexpected during test flights as they’re “all about improving our understanding and development of a fully reusable transportation system.”

The ultimate goal is to stick the second-stage Starship booster, which will also fly as a spacecraft, atop SpaceX’s under-development Super Heavy rocket to carry as many as 100 people and cargo to Earth orbit, the moon, Mars, and possibly beyond. The system could also be used to transport people between cities around the world in super-quick time.

A big step toward these goals will be landing the Starship prototype without the fireworks. Let’s hope SpaceX can nail it for the first time on its next test.

After ‘The Voice’ and BET, two Mississippians give one last concert before heading to L.A. Published 6:45 am Monday, January 30, 2023 … END_OF_DOCUMENT_TOKEN_TO_BE_REPLACED

Despite increasing layoffs across the country, demand for IT pros remains high, especially for software developers and senior software … END_OF_DOCUMENT_TOKEN_TO_BE_REPLACED