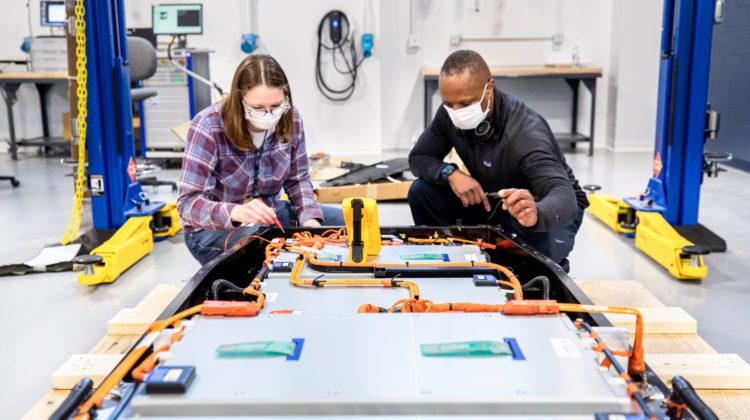 DETROIT — Ford Motor plans to invest $185 million into a new battery lab as a step toward manufacturing its own battery cells for electric vehicles, the company announced Tuesday.

The funds will go toward constructing Ford Ion Park, a “pilot facility” for production that’s expected to open by the end of next year outside Detroit. The planned 200,000-square-foot lab is designed to accelerate development of the technologies as the company plans to “eventually manufacture” new battery cells and batteries, according to Hau Thai-Tang, Ford’s chief product platform and operations officer.

Thai-Tang said Ford believes it still makes sense to purchase the cells from suppliers until EVs become more mainstream. EVs represented only about 2% of U.S. vehicle registrations last year, according to IHS Markit.

“We want to give Ford the flexibility and optionality to eventually vertically integrate, and that was one of the drivers behind the creation of this battery center of excellence in Ford Ion Park,” Thai-Tang told reporters during a media briefing Tuesday. “It’s really for us to develop that expertise and competency in house, and give us that flexibility in the future.”

Thai-Tang said Ford will focus on “advancing” the next-generation of lithium-ion batteries that are used today. The company is also looking into solid-state lithium metal batteries considered safer and better than the cells on the market now. He said Ford plans to do so through internal work as well as collaborations.

Ford is hiring 150 people for Ion Park and has already brought on some employees.

The investment and hiring comes after Ford put $100 million into a new battery benchmarking and test lab. The company said it opened the facility last year in Allen Park, Michigan, a suburb of Detroit. The two investments add to Ford’s plans to put $22 billion into vehicle electrification from 2016 through 2025.

Ford’s first new EV, the Mustang Mach-E, launched in the U.S. at the end of last year. The company expects to follow it with an all-electric Ford Transit van later this year and an EV version of the Ford F-150 pickup by mid-2022.

Ford’s plan to manufacture battery cells comes six months after new Ford CEO Jim Farley said the automaker was “absolutely” interested in producing its own batteries. Farley changed the course set by his predecessor, Jim Hackett, who had said the automaker saw “no advantage” in doing so. Farley succeeded Hackett on Oct. 1.

Ford’s announcement comes a day before the company is scheduled to report its first-quarter earnings.

We're all about the IT leader here at Computing - whether that's the CIO, CTO, IT director, chief architect or any one of dozens of other titles. … END_OF_DOCUMENT_TOKEN_TO_BE_REPLACED

A strategic relationship between Türk Telekom and Korea Telecom (KT) was launched on Sunday. This initiative will promote cooperation in the areas of … END_OF_DOCUMENT_TOKEN_TO_BE_REPLACED