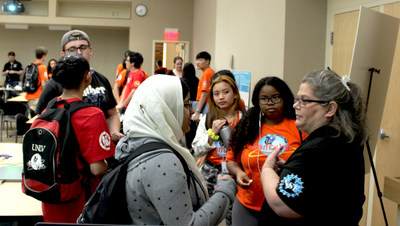 Ms. Bromley-Norwood recently transitioned from teaching cybersecurity and computer science at Cheyenne High School to a new role as the K-12 Computer Science Administrator at the Clark County School District. In selecting her as CyberHero, SynED considered her leading role in growing cybersecurity education pathways in the state of Nevada and her persistence in finding innovative ways to instill a passion for cybersecurity in her students.

“Fran led the creation of K-12 cybersecurity pathways in Nevada,” said Dan Manson, Emeritus Professor of Computer Information Systems at California Polytechnic University, Pomona. “Working closely with local colleges, Fran led the effort to develop and implement the Nevada CTE cybersecurity program of study. It is an honor and a privilege to work with Fran in identifying and developing Nevada’s cybersecurity talent.”

Ms. Bromley-Norwood engages her students in the field of cybersecurity by relating her own journey of education and growth, helping hesitant students see a path to expertise and a career: “When I have the opportunity to share my story with other individuals who may be hesitant to learn about cybersecurity, or don’t think they know enough about it, or aren’t ‘techy’ enough to be able to go into that field, I explain to them how excited I was to get started. As far as I’m concerned, we’re all students.”

She began her teaching career in her native Long Island, New York. But after a family health scare forced a move to a dryer and warmer climate, she and her family moved to Las Vegas, where she taught 4th and 5th grade students. Bromley-Norwood has since blossomed into one of Nevada’s cybersecurity education and Career and Technical Education (CTE) leaders.

Ms. Bromley-Norwood has a contagious enthusiasm for her work and an innate drive to learn and grow – a trait exemplified in her email tagline, “If you do not ask, you will not know.” While she enjoyed teaching fifth graders, she knew she wanted to do more. “I wanted to learn more, knowing that computer science was going to be really important for the way the future was going.”

After earning a master’s degree in Computer Programming and Computer Science, it wasn’t long before she was teaching Computer Science at Cheyenne High School in North Las Vegas, teaching some of the same students she had taught in elementary school.

Cheyenne High School, like most schools in Nevada, didn’t have any cybersecurity classes when she started there. One day, Bromley-Norwood and other computer science teachers were offered an opportunity learn more about a cybersecurity program. “I’m always open for any opportunity – if you want to introduce it to me, I want to know more about it,” she recalled thinking.

Though she was new to computer science teaching and the high school district, Bromley-Norwood was surprised to see that she was the only teacher expressing any interest. As it turned out, the opportunity led to Bromley-Norwood being heavily involved in the creation of the first cybersecurity program of study for CTE in the state. Bromley-Norwood went on to help design the State of Nevada’s K-12 cybersecurity curriculum.

Fran coordinated one of the first K-12 cybersecurity “capture the flag” competitions in Nevada and more recently has pushed hard to get female students more engaged in cybersecurity competitions. In 2018, Bromley-Norwood hosted a Girls Go CyberStart competition at Cheyenne and they had the highest number of registrants in the country – an astounding 290 students.

“She really deserves this CyberHero award,” Ricardo Torres, a former student, said. “I’ve never seen as dedicated a teacher as Ms. Bromely-Norwood. She goes above and beyond. She is willing to go out of her way, to wake up early in the morning to teach a class that she isn’t obligated to teach. I consider her a friend, a mentor, and a coach.” With Ms. Bromley-Norwood’s support, Torres was able to land several internships and jobs, and is currently a Computer Technician at Cheyenne High School.

Bromley-Norwood is now working on building stronger connections between industry and businesses and cybersecurity CTE programs in the state. Tesla, which is building a new Gigafactory outside Reno, recently agreed to prioritize the hiring of the state’s advanced manufacturing CTE students – though not cybersecurity CTE students, yet. Bromley-Norwood hopes to change that.

She already successfully extended a Blockchains, LLC partnership to the Las Vegas region, after it got started in Northern Nevada. The Sparks, NV company is working with educators to develop an in-state pipeline of talent in cutting-edge technology like blockchains. During the pilot phase about 130 students each year will enroll in dual-credit blockchain courses, receiving both college and high school credits, with Blockchains providing paid work experience for at least 10 following the completion of the course sequence.

“It’s really too late to start in college,” Dan Manson concluded. “I taught college for over thirty years. I really want to see the talent develop before college. I want them to have the understanding of what cybersecurity is, and the passion for cybersecurity before they come to college. And what Fran is doing really makes a difference.”

Fran Bromley-Norwood really believes in her students. At a 2019 conference of cybersecurity educators from around the country, she put her students front and center, inviting them to present on various subjects to the adult, professional attendees. Attendees asked the students questions about cybersecurity, in a reversal of the usual roles. Attendees later told her it was their favorite part of the entire conference, and some of the students came away with leads on potential jobs.

SynED’s CyberHero’s series, which highlights cyber heroes who quietly go above and beyond in helping to secure our nation and communities, is a monthly column published nationally. SynED is a non-profit organization that acts as a catalyst to help you help others to improve their lives through education and knowledge and skill acquisition, giving them rich career opportunities. Our team will help you explore the many possibilities and potential solutions available to achieve your desired outcomes. SynED also maintains a community for CTE professionals at Cyber-Guild.org®. SynED is the proud recipient of the 2021 Association for Career & Technical Education Business-Education Partnership Award.

[ad_1] Superconducting quantum computers are huge and incredibly finicky machines at this point. They need to be isolated from anything that might … END_OF_DOCUMENT_TOKEN_TO_BE_REPLACED