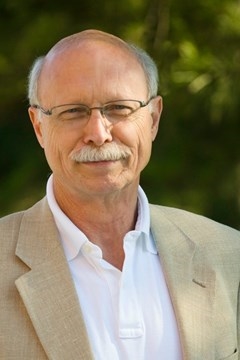 Fred Limp Jr., University Professor in the Department of Geosciences, inaugural holder of the Leica Geosystems Chair in Geospatial Imaging and founding director of the Center for Advanced Spatial Technologies, will be retiring from his position at the end of the fiscal year after more than 41 years working on the U of A campus.

Please come celebrate with us in a drop-by gathering from 2-4 p.m., June 4, at The Gardens on the U of A campus. More information can be found on the event page. If you are not able to attend, but wish to send your kind regards, please check out our digital card.

While at the U of A, Limp made consequential and long-lasting contributions in many areas of research and education. In the area of geoinformatics, he was a founder and served on the Board of the Open Geospatial Consortium, Intergraph Geospatial Executive’s Board, AmericaView, SPOT Image Academic Advisory Board, the National Consortium for Rural Geospatial Innovations Board, Oracle North America Users Forum, Sam M. Walton College of Business Information Technology Research Institute Board, the U of A’s RFID Center Steering Committee and the OGC Interoperability Institute.

He was part of the development community that spearheaded the Free and Open-Source Software (FOSS) GIS software — GRASS — in the mid-80s and early 90s. He served as an instructor on the GRASS software at many locations including Colorado State, Rutgers, NASA and others. He was appointed by Gov. Jim Guy Tucker to the Arkansas Mapping and Land Records Modernization Board and later appointed by Gov. Mike Huckabee to the Arkansas State Land Information Board, which eventually became the Arkansas GIS Board. He is co-author of two legislative acts that implemented geospatial technologies across the state. He has been a leader in the development of online geoinformatics education, including development of two certificate programs, both approved by the Arkansas Department of Higher Education (ADHE).

He has also been one of the strongest supporters of K-12 geospatial education through his early support of the EAST Initiative. He received the Arkansas GIS Users Forum Lifetime Achievement Award and was a founding Arkansas Computing Academy Inductee. For his research, he received the GAIA Award from the GRASS Community, the Fulbright College Master Researcher Award and the U of A Alumni Distinguished Research Award.

Archaeology and heritage preservation — and its intersection with geoinformatics — has been a career passion for him. While completing his graduate studies at Indiana University, he led the development of an archaeological computer mapping system and the DELOS information systems, one of the first comprehensive database systems in archaeology. As an anthropologist in the late 1970s, he was involved in a range of excavations and surveys; however, his dissertation included the development and programming of what would later be called a “GIS” — which he used to apply location choice analysis to pre-Columbian settlement locations.

In the world of archaeology, he is known for his abilities in applying a range of “high tech” methods used for discovery, analysis and preservation of archaeological and global heritage resources. He has been involved in heritage preservation projects on six continents involving the application of geographic information systems, global navigation satellite systems, remote sensing, laser scanning and photogrammetry. He saw the future of geospatial technologies long before most people. In 2006, he wrote a three-part series entitled “An Impending Massive 3-D Mashup,” for Geoplace.com, in which he predicted the future fusion of technologies from the geospatial, gaming and CAD/CAM sectors. Today we see his forecast was right on target.

In 1991, Limp founded the Center for Advanced Spatial Technologies, often referred to simply as CAST – one of the first ADHE-approved Centers on the U of A campus. CAST was the embodiment of the ideas he developed in his early career, and under his leadership, became one of the premier geospatial research centers in the world, not only as applied to archaeology, but as a true multi-disciplinary center. In the late 1990s, CAST developed the first seamless, statewide geospatial data warehouse for the State of Arkansas, which became known as GeoStor. GeoStor made Arkansas geospatial data easily accessible by the public and had broad educational and economic impacts for the state. The framework developed by Limp and the CAST team can still be seen in geospatial data repositories in use today, not only in Arkansas, but around the world.

“I think everyone who has worked with Fred over the years — and there have been many of us — would agree that he is the Happy Warrior. Always optimistic and inquisitive, we all grew to expect those 2 a.m. emails with a ‘check this out!’ subject line,” remarked Jackson Cothren, current director of CAST and Limp’s successor in that position. Cothren also said, “Of all his accomplishments, his selfless and energetic devotion to his colleagues and students is how he will be remembered, and missed, here.”

If you would like to attend Limp’s retirement celebration, and maybe hear some stories, or tell one of your own, please drop in from 2-4 p.m., Friday, June 4. Parking is available in Lot 56B near the intersection of Razorback Road and Nolan Richardson Drive (formerly Leroy Pond Drive). To maximize the number of guests who can attend while also social distancing, please consider keeping your time at the event to 30 minutes.

[ad_1] Superconducting quantum computers are huge and incredibly finicky machines at this point. They need to be isolated from anything that might … END_OF_DOCUMENT_TOKEN_TO_BE_REPLACED