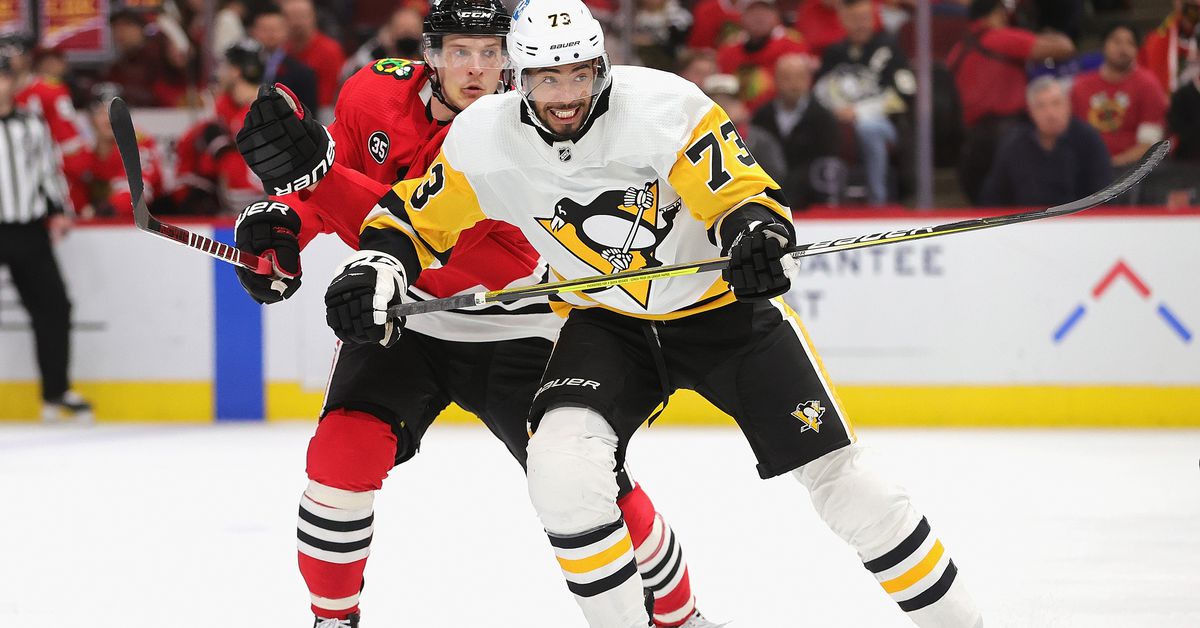 Opponent Track: Chicago was in action last night in Boston, losing their third straight game after getting beaten like a drum 6-1 by the Bruins and being out-shot 43-18. The Blackhawks are fading fast with just 2-6-3 record since October 26th after beginning the season surprisingly well with a 4-2-0 start in their first six games.

Pens Path Ahead: The Pens get two days off after tonight, before embarking on another three-game-in-four-day stretch starting next Wednesday at home for the traditional Thanksgiving Eve home game against Calgary. Then Pittsburgh makes their way to Philadelphia for a special 5:30pm start for the 2022 NHL Thanksgiving Showdown (whatever that means) next Friday, followed quickly by a home game next Saturday against Toronto.

Season Series: Chicago makes their lone trip to Pittsburgh on April 11th, the second-to-last game of the season for the Pens. That will come far after the trade deadline, so today could possibly/probably be the last time to see Jonathan Toews and/or Patrick Kane play against Pittsburgh as members of the other dyanstic-type 2010’s franchise.

Getting to know the Blackhawks

—Looks like an island of misfit toys on the blueline without Seth Jones available. The Blackhawks are riddled with players just hanging on (like Tinordi and old pal Jack Johnson) or others whose careers never really launched (Murphy and McCabe) and some more that who the hell knows who they are and have to offer (Roos, Mitchell).

—Soderblom in net applies to the above thought as well. The undrafted 23-year old has nine career NHL games under his belt in his second season in the NHL ranks. Soderblom spent most of last year with AHL Rockford and acquitted himself well with a .919 save%. He has close to that so far in six games this season in the NHL. He doesn’t look like a pushover, but might not even be in the NHL right now if not for the injury to the veteran Stalock.

—My long-running theory/observation about teams with a high “goalies used to games played” ratio being not very good teams holds here. Chicago’s ended up divvying the workload pretty evenly between Mrazek, Soderbolm and Stalock with a cameo from fourth stringer Dylan Wells, and truth be told, it’s not really a goalie problem in Chicago. It’s just a very bad overall talent pool of NHL skaters problem.

—That said, the ‘Hawks have a eight players with two or more goals, and a handful more in the three, four five range – it’s hard to tell who might heat up and be able to pop one in on any given night. But they’re also dead last, 32nd overall in the league, by averaging just 2.41 goals/game this year. The issue is that no one is really that consistenly dangerous outside of Kane’s playmaking and Toews’ goal scoring.

Before Marian Hossa has his number retired by the Blackhawks this weekend, I share what I’ve learned about Hossa from covering him and writing a book with him. https://t.co/5CEavJHXML

Hossa, 43, last played in the NHL in 2016-17. His stint with Chicago marked the beginning, middle and end of their stint a top of the mountain. He arrived in 2009-10, after famously losing two Stanley Cup Finals in a row with Pittsburgh in 2008 and then Detroit in 2009. He wouldn’t lose a Final again, finally winning the Cup on his third try with the Blackhawks in 2010. It was Chicago’s first Stanley Cup victory since 1961.

After Hossa’s retirement, Chicago has not made the playoffs in the five seasons since (save their involvement and first round loss in the bubble in 2020, despite being in seventh place in a seven team division during the regular season).

It makes sense that the Blackhawks honor Hossa and cherish the memories of what was in 2010, ‘13 and ‘15 before the last remaining vestiges of the salary-cap era dynasty in Toews and Kane are expected to move on around the trade deadline or at the end of the season when their contracts end.

In Pittsburgh, Hossa will go down in lore as a Benedict Arnold style traitor after spurning the Pens’ contract offer in 2008, but it’s also fitting the other most successful team of the era is in the building to witness Hossa’s special moment. 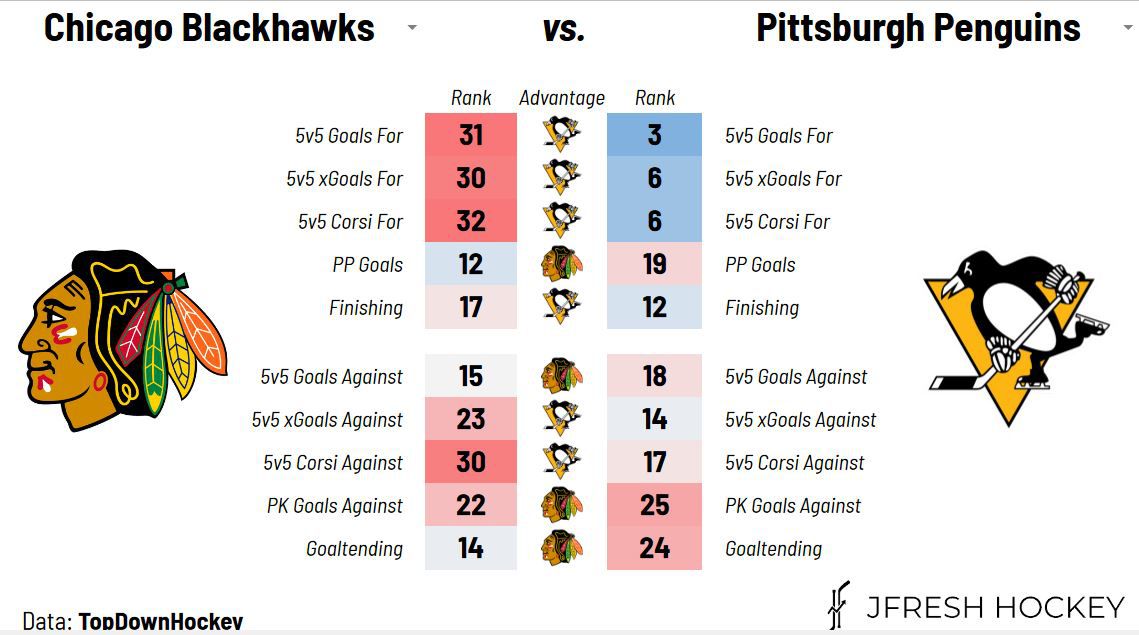 —Chicago is in the process of stripping down their team and bottoming out, they weren’t expected to be very strong this year and they are certainly not good at all by advanced metrics. After a nice start for the first six games, it’s been free-fall mode for them. Based on Corsi and expected goals, the Blackhawks are probably the league’s most impotent team right now at 5v5. Their only saving graces is that they can sting an opponent on the power play (where Kane, Domi and Toews all have five or more points so far on the man advantage) and their goalies have been bailing them out quite a bit to not turn things into even more of a disaster.

—Pittsburgh’s offense at 5v5 has been running red hot and that will be the matchup to watch. The Blackhawks were out-shot 43-18 last night, and this is a game where the Pens should heavily control the puck and shot possession. Can they turn that into goals against Soderblom? If so, this might not be a competitive game for very long. If the goalie is standing on his head, he might hold the Blackhawks in long enough for them to get a power play chance to possibly get ahead or stay close.

And now for the Pens…

—Talk about burying the lede – it’s career game No. 1,000 for Evgeni Malkin tonight! Shame it’s coming on the road but you can bet the traditional silver stick ceremony will be coming up in Pittsburgh soon enough!

—The Pens are clicking and coming off of one of their most impressive performances of the year last night in the 3-0 win against Winnipeg that finally showed they could play a complete game and keep the puck out of their own net. Can they “get up” on a three-in-four situation and be able to neutralize a lesser opponent? That will be the challenge in this one.

Marion Technical College has wrapped up its month-long UpSkill-A-Thon competition. MTC collaborated with Microsoft Philanthropies to launch the … END_OF_DOCUMENT_TOKEN_TO_BE_REPLACED

Knox College is currently responding to a system disruption caused by ransomware. A statement provided Friday by Knox College Vice President of … END_OF_DOCUMENT_TOKEN_TO_BE_REPLACED