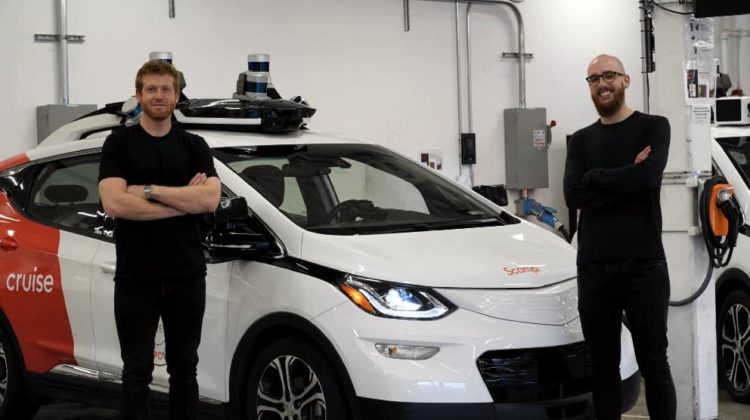 Cruise Chief Technology Officer Kyle Vogt (left) with Voyage CEO Oliver Cameron, who will join Cruise as part of an acquisition of the company.

The companies, which didn’t disclose the terms of the deal, announced it Monday in a blog post by Voyage CEO Oliver Cameron, who will join Cruise as vice president of product. Cruise spokesman Ray Wert declined to comment on the cost of the deal.

It’s unclear how long Cruise will continue operating in the retirement communities. Wert said the “communities in which they operate are not on our immediate roadmap.” Instead, Cruise is focused on launching a robotaxi business in San Francisco. A majority of Voyage’s 60 employees are expected to join Cruise, Wert said.

“Voyage is tightly aligned to our mission, and shares our mindset around safety, accessibility, cost and convenience for customers,” Wert said in an email. “Their talented team is highly productive and resourceful, with direct experience in developing a full-stack AV solution that will help accelerate our efforts to build the world’s most advanced self-driving vehicles.”

The acquisition adds to an ongoing consolidation in the autonomous vehicle sector after years of enthusiasm touting the technology as the next multitrillion market for transportation companies. Some companies, such as Uber Technologies, have given up on developing the systems in-house, while others such as Zoox sold to Amazon. Alphabet’s Waymo remains the most high-profile front-runner, operating a public autonomous vehicle fleet in Arizona.

Cruise has remained steadfast in its testing since being acquired by GM in 2016. It has grown its registered testing fleet to more than 200 vehicles but hasn’t yet announced when it plans to offer a robotaxi fleet to the public in San Francisco. It initially planned to do so in 2019.

Other investors in Cruise now include Honda Motor, SoftBank Vision Fund, Microsoft and others.

What kind of nexus is substantial enough to allow a state to tax a business’s sales in interstate commerce? In its 2018 decision in , the U.S. Supreme … END_OF_DOCUMENT_TOKEN_TO_BE_REPLACED