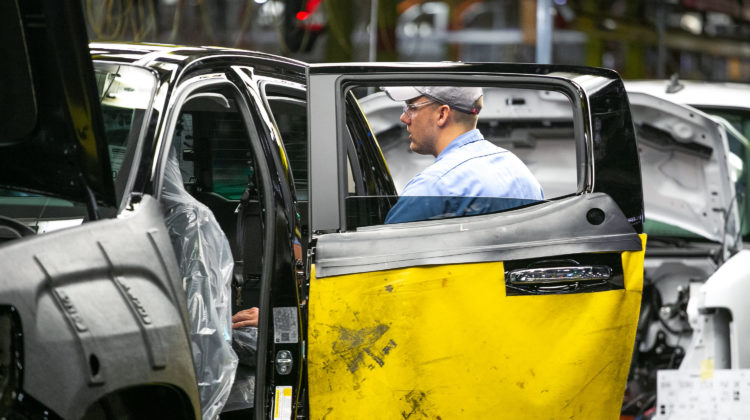 A General Motors employee works Dec. 13, 2019 at the automaker’s plant in Wentzville, Missouri.

Downtime at the Missouri plant will start Monday and run through April 12, according to a message to employees Wednesday from the local United Auto Workers union. It produces GMC Canyon and Chevrolet Colorado pickups. Van production at the facility will not be impacted, according to GM.

GM also will pull ahead scheduled downtime for the plant by two weeks to May 24 through July 19 to “allow for more time to build product” during the second half of the year, the union said. GM spokesman David Barnas confirmed the plans.

In addition to the pickups, Barnas said GM will extend downtime at a car plant in mid-Michigan by two weeks to mid-April. GM has temporarily shuttered or cut production at several plants that produce cars or crossovers to prioritize production of its full-size pickups and SUVs.

“GM continues to leverage every available semiconductor to build and ship our most popular and in-demand products, including full-size trucks and SUVs for our customers,” he said in an emailed statement. “We have not taken downtime or reduced shifts at any of our full-size truck plants due to the shortage.”

GM plants in Kansas and Ingersoll, Ontario, that shuttered in early February over the chip shortage are expected to remain closed until at least mid-April. GM plants in Brazil and South Korea also have been affected by the shortage. A plant in Mexico is expected to reopen April 5 after being shut down since Feb. 8.

Semiconductor chips are extremely important components of new vehicles for infotainment systems, power steering and brakes, among other systems. The parts can contain several sizes and different types of chips.

Marion Technical College has wrapped up its month-long UpSkill-A-Thon competition. MTC collaborated with Microsoft Philanthropies to launch the … END_OF_DOCUMENT_TOKEN_TO_BE_REPLACED

Knox College is currently responding to a system disruption caused by ransomware. A statement provided Friday by Knox College Vice President of … END_OF_DOCUMENT_TOKEN_TO_BE_REPLACED