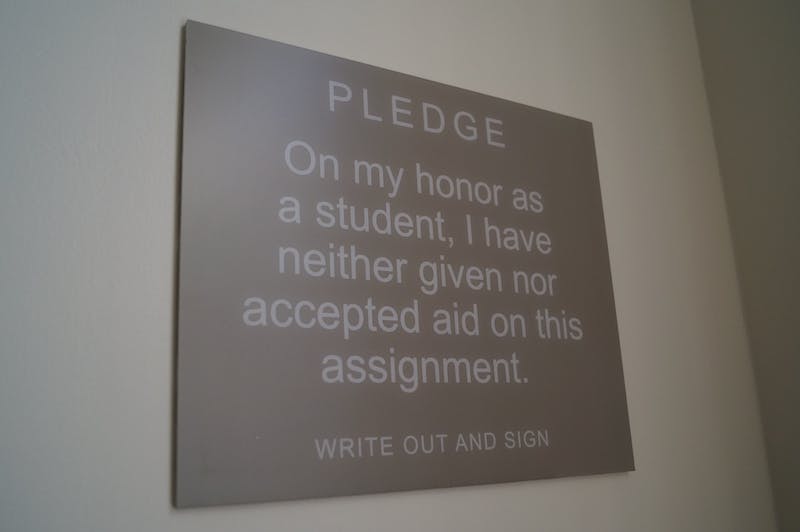 The Honor Committee released a Statistical Transparency Reporting Portal in March with data on Honor reports and cases over the past eight semesters, from spring 2017 to fall 2020. The website allows the public to interactively view the process for cases reported to the committee and demographic statistics that, until now, were only viewable by Honor members.

Between spring 2017 and fall 2020, 286 reports to Honor for cheating, stealing and lying resulted in hearings. There were 87 total cases in 2020, and the majority of accusations were for cheating.

The data is displayed as rolling proportions and includes a rolling average of the number of students involved in each step of the case process — calculated over eight semesters — based on students’ school, race, international status, student-athlete status, gender and year.

Data expressed includes the number of students who were reported to Honor, filed informed retractions, had their cases dropped by an investigative panel, were formally accused of a violation and had hearings and were found guilty of a violation. Informed retractions occur when students admit guilt after being informed of an Honor offense report and take a two-semester leave of absence from the University.

Second-year College student John Sun chairs the statistical transparency working group, whose members worked for about a year to create the website. The group worked with Information Technology Services to design the data portal’s layout.

Sun said one of the main difficulties in designing the website was creating a horizontally oriented scrolling layout, as he wanted the website to flow horizontally like the Honor case process flow chart.

“A completely horizontally scrolling website … is basically the opposite of what the ITS web design teams have in their template databases, so a lot of the basic structure had to be designed and created from the ground up,” Sun said in an email with The Cavalier Daily.

Additionally, he noted that conveying the data in a way that maintains transparency and protects confidentiality of students and reporters can make the website challenging to interpret. Instead of explicitly listing the specific demographic information of accused students each semester, rolling proportions and averages are computed over eight semesters.

“We purposefully hinder the interpretability of the data so that we can best present general trends while at the same time obfuscating individual cases in order to minimize the probability that individuals can be identified,” Sun said.

Additionally, he said that the website will increase the committee’s transparency which follows the release of the Bicentennial Report in 2019. The report was the largest internal review of Honor and featured data from a century of annual dismissals, three decades of data on all sanctions and six years of full data from reports and outcomes.

“Honor gets a lot of criticism for a lot of reasons and a lot of that criticism is valid, but I think this shows that we aren’t just saying things,” Keane said. “We learned from what was in the bicentennial report and we took action based on it.”

Keane said that the over-representation in reports against Asian Americans and international students expressed in the report can help University members to recognize possible implicit biases against these groups.

Out of reported international students over the past four years, none have been found guilty and a rolling average of 0.25 domestic students have been considered guilty — and subsequently faced the single sanction of expulsion — each semester.

Out of reported Asian American and white students over the past eight semesters, an average of 0.078 percent — an average of .25 students per semester — were found guilty in both demographic groups. No African American, Hispanic or Hawaiian Pacific students were sanctioned during this period.

According to the website’s most recent data, the committee saw 74 cheating cases, two stealing cases and 11 lying cases in 2020, of which none of these cases resulted in a guilty verdict. Of the accused students, 28 filed informed retractions. Students who do not take IRs go through a trial and face expulsion if found guilty.

Only one student over the past four years “left admitting guilt,” meaning that they were dismissed from the University after failing to request a hearing within seven days of being notified of their accusal.

In 2019, Honor had 78 total hearings compared to 87 hearings in 2020. Keane said this increase can’t necessarily be attributed to online learning during the pandemic, though some professors saw cheating as a greater concern with virtual examinations.

“Anecdotally people think — and I would agree, just based on what I’ve heard — that cheating was a lot higher because of COVID, because of it being online, but it’s hard to make a definitive conclusion based on just that data alone,” Keane said.