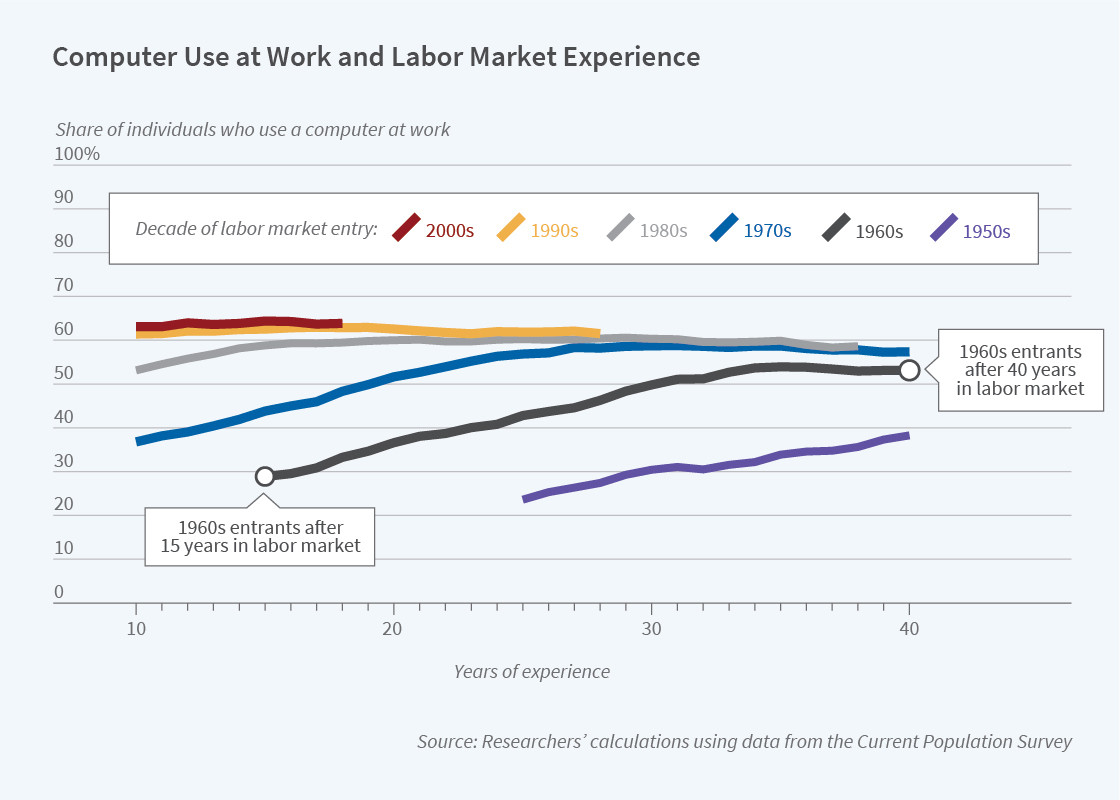 Limited skill with workplace computing raised the retirement rate for older workers by more than 1 percentage point a year when computers were introduced to jobs after 1984; these differentials began to disappear after 2000.

The revolution in the use of workplace computers that began in the 1980s took a toll on older workers who were not tech-savvy. They faced pay cuts, early retirement, and transfers to less intensive jobs.

In Computerization, Obsolescence, and the Length of Working Life (NBER Working Paper 28701), Péter Hudomiet and Robert J. Willis study how computerization affected older workers between 1984 and 2017. They find that the computer knowledge gap between older and younger US workers peaked in the 1980s and early 1990s, and then began to decline. It had disappeared by the mid-2010s.

Computer-use has risen over recent decades.

The researchers use responses to a number of government surveys to calculate the probability that workers over age 50 were equipped with the computer skills called for in their occupations. Their measure of the knowledge gap captures the extent to which workers fall short of computer literacy. For example, if 70 percent of secretaries aged 40–49 in 1992 used word processors rather than typewriters, while 60 percent of secretaries over the age of 50 did so, the knowledge gap would be 10 percentage points.

The researchers estimate that computer knowledge gaps increased the likelihood that older workers — ages 50–69 — would retire by 1 to 1.4 percentage points per year. This raised the retirement rate for this age group from about 8 percent to over 9 percent per year. They also estimate that a 10-percentage-point knowledge gap reduced annual wages by at least 2.5 percent, and perhaps as much as 7 percent.

Four subgroups of the population were particularly hard hit by knowledge gaps: women, workers in office jobs, workers with some college education, and workers between the ages of 60 and 64. Women may have been more affected because they were less likely to learn to use computers than men. Office workers such as bookkeepers may have seen computers replace their jobs altogether. More highly educated workers may have had greater opportunity to find non-computer-intensive work. And for older workers in general, companies may have decided that it was not worth retraining those who were already near the end of their careers.

For some occupations, such as maintenance and food service, computer use remained negligible. Older workers in moderately skilled occupations, such as property management, sales, and factory floor supervision, lagged behind their younger peers in computer knowledge well into the current century.

The Pentagon has split a $9bn contract for cloud computing services among Google, Oracle, Amazon and Microsoft, one year after scrapping a previous … END_OF_DOCUMENT_TOKEN_TO_BE_REPLACED

(TNS) — Among all colleges and universities in Tennessee, only 45 percent of students who enter college ultimately get either an associate's degree … END_OF_DOCUMENT_TOKEN_TO_BE_REPLACED

An increased reliance on technology goes hand-in-hand with growing avenues for cyberthreats, and courts are no strangers to the soaring wave of data … END_OF_DOCUMENT_TOKEN_TO_BE_REPLACED