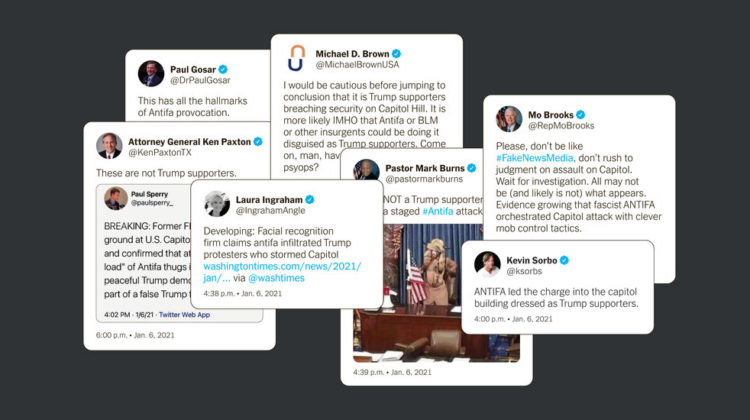 Ms. Ingraham, who told Fox News viewers about “antifa sympathizers” at the riot, later shared on Twitter that the Washington Times article she cited had been debunked; she did not issue an on-air correction. Mr. Herman, the Limbaugh guest host who speculated about antifa, wrote in an email on Saturday that “it was clear a large group of Trump supporters entered the Capitol and assaulted people.” But he continued to assert, falsely, that antifa activists had plotted to impersonate Trump supporters.

Of the 290 people who have been charged in the attack, at least 27 are known to have ties to far-right extremist groups like the Oath Keepers or the Proud Boys. Others have links to neo-Confederate and white supremacist entities, or are clear supporters of the conspiracy movement QAnon. The vast majority expressed a fervent belief that Mr. Trump was the election’s rightful winner.

On Jan. 8, the F.B.I. said there was no evidence that supporters of antifa, who have been known to aggressively counterprotest white supremacist demonstrations, had participated in the Capitol mob. And on Jan. 13, Representative Kevin McCarthy, the Republican House minority leader, spoke at Mr. Trump’s impeachment trial and declared, “Some say the riots were caused by antifa. There’s absolutely no evidence of that, and conservatives should be the first to say so.”

But the next day, the arrest of a protester named John Sullivan prompted yet another surge in right-wing media about antifa and the riot.

Mr. Sullivan called himself an “activist” from Utah and CNN introduced him, inaccurately, as a “left-wing activist” when he appeared on the network on Jan. 6. (He had sold footage to CNN and other news outlets that showed the shooting of Ashli Babbitt, a rioter who died inside the Capitol.) The conspiracy site Gateway Pundit and Rudolph W. Giuliani, Mr. Trump’s lawyer, seized on Mr. Sullivan’s arrest to again blame antifa in posts that collected tens of thousands of likes and shares on Facebook and Twitter.

In reality, Mr. Sullivan was an attention seeker whose politics were fungible and seemingly shifted based on which protest he was attending at the time, according to activists from Seattle, Salt Lake City and Portland, Ore., who had issued warnings about him months before the Capitol riot.

After ‘The Voice’ and BET, two Mississippians give one last concert before heading to L.A. Published 6:45 am Monday, January 30, 2023 … END_OF_DOCUMENT_TOKEN_TO_BE_REPLACED