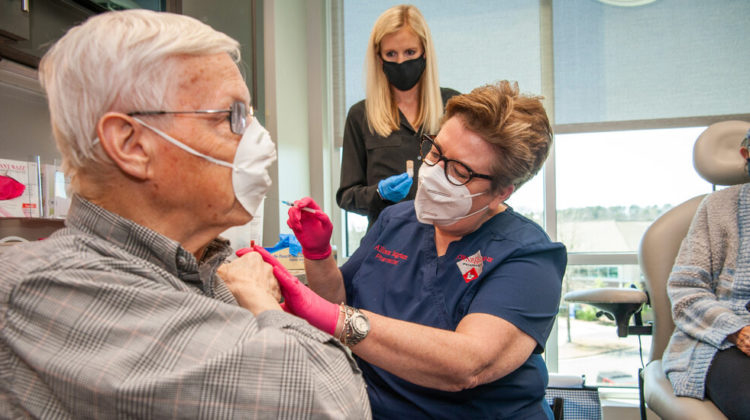 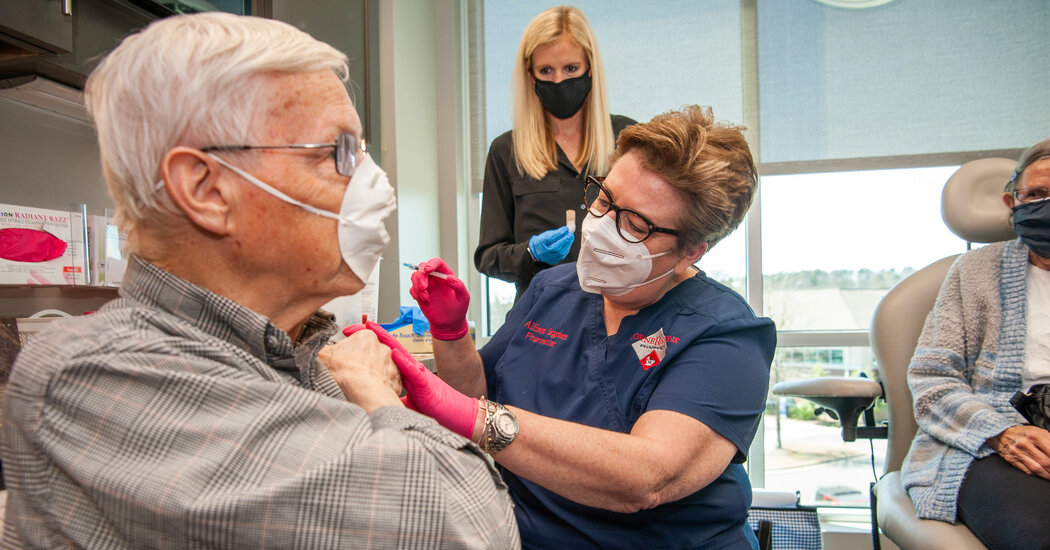 In the hustle to score an elusive vaccine appointment, the leftover dose has become the stuff of pandemic lore.

Extra shots — which must be used within hours once taken out of cold storage — have been doled out to drugstore customers buying midnight snacks, people who are friends with nurses and those who show up at closing time at certain grocery stores and pharmacies. At some larger vaccination sites, the race to use every dose sets off a flurry of end-of-the-day phone calls.

In every case, if the leftover dose does not find an available arm, it must go into the trash.

Now, a New York-based start-up is aiming to add some order to the rush for leftover doses. Dr. B, as the company is known, is matching vaccine providers who find themselves with extra vaccines to people who are willing to get one at a moment’s notice.

Since the service began last month, more than 500,000 people have submitted a host of personal information to sign up for the service, which is free to join and is also free to providers. Two vaccine sites have begun testing the program, and the company said about 200 other providers had applied to participate.

Dr. B is just one attempt at coordinating the chaotic patchwork of public and private websites that allow eligible people to find vaccine appointments. Critics have said the current system is confusing, unreliable and often requires access to the internet, as well as the time to prowl websites for the rare appointment. In many places, it also largely ignores people who aren’t yet eligible for a shot, wasting the opportunity to get them on a formal waiting list.

While Dr. B does not solve all of those broader problems, if it scales up the way some hope that it will, it could serve as a model for a better, more equitable way of scheduling vaccinations.

“I think that’s a great idea,” said Sharon Whisenand, the administrator of the Randolph County Health Department in rural Missouri.

Ms. Whisenand said that 60 to 80 people failed to show up to the county’s first mass vaccination event in late January, prompting her staff to make dozens of calls at the end of the day to people on a waiting list. “We sounded a little like a call center for a bit,” she said. The workers eventually found enough takers to administer most of the extra doses, but some shots were thrown out.

Dr. B is a for-profit effort, set up as a public-benefit corporation that includes efficient and equitable vaccine distribution in its mission. But its founder, Cyrus Massoumi, a tech entrepreneur, hasn’t yet described Dr. B’s business model. He said he was financing the project out of his own pocket and had no plans to collect revenue. The company is named after his grandfather, who was nicknamed Dr. Bubba and became a doctor during the 1918 influenza pandemic.

Mr. Massoumi is a founder and former chief executive of ZocDoc, which helps patients find available doctor’s appointments, and the founder of Shadow, a company that reunites lost pets with their owners using technology and local volunteers. Like both of those efforts, Dr. B seeks to make connections between groups that need something from each other.

“Ultimately, patients need this vaccine, and there’s providers who need help getting it to the people of priority,” Mr. Massoumi said in an interview. “That’s my motivation.”

After coming up with the idea for Dr. B in January, Mr. Massoumi recruited several engineers from Haven, a now-defunct health care collaboration among Amazon, Berkshire Hathaway and J.P. Morgan, to build its website and underlying database. Amazon also donated web services, Mr. Massoumi said.

The half a million people who have signed up for the service entered basic biographical information, such as their date of birth, address, underlying health conditions and the type of work they do. If vaccine providers near them have extra doses, they will get notified via text message and have 15 minutes to respond. Then they must be willing to quickly travel to the vaccination site.

The company’s database sorts people by local rules about vaccine priority, giving providers better odds of administering their leftover shots to those in the greatest need.

For many providers, that orderly procedure would be a welcome change from the haphazard systems they are using now. At some pharmacies and supermarket chains, workers have resorted to combing the shopping aisles to find people willing to get a last-minute vaccine. At other locations, vaccine hopefuls wait in line at the end of every shift, which could pose an infection risk, particularly to the most vulnerable.

Despite some grumbling about younger, healthier people skipping the line by snapping up leftover doses, public health experts and many ethicists say the most important thing is that the vaccines don’t go to waste. Earlier in the vaccine rollout, some politicians, such as Gov. Andrew M. Cuomo of New York, threatened sanctions against providers for not precisely following priority rules, and a doctor in Texas lost his job after he gave expiring doses to people with medical conditions, including his wife.

For those who are offered a last-minute vaccine, “that person should not say no because they want it to go to someone else,” said Dr. Shikha Jain, an assistant professor of medicine at the University of Illinois Chicago, and a co-founder of IMPACT, a group that has been working to improve the equitable distribution of vaccines. However, “it’s really important to be intentional and to be equitable,” she said.

Mr. Massoumi said he had taken several steps to ensure that the service will be equitable. That has included turning down early media requests from mainstream publications and instead promoting Dr. B on Zoom calls with representatives for groups like Black churches and Native American community groups, given that the pandemic has disproportionately affected nonwhite groups.

“It was really important for him to let these communities have potentially a place at the front of the line, or to get the information early,” said Brooke Williams, who is Black and a member of the Resistance Revival Chorus in New York. She joined one of the early Zoom calls and began spreading the word.

“Hearing about shots that were getting thrown out was just heartbreaking and infuriating,” she said.

The service suffers, however, from some of the same barriers that have marred vaccination efforts so far. Although signing up is simple, doing so requires an internet connection as well as ready access to a cellphone. Because of the last-minute nature of leftover doses, participants must have flexible schedules and access to transportation.

“It’s still heavily internet dependent, so it will depend on who hears about it,” said Arthur Caplan, a medical ethicist at New York University’s Grossman School of Medicine. “It seems he’s trying to solve a problem and do some good, but I’m sad that governments — counties, cities, national organizations — didn’t prepare for this and then didn’t react more quickly to give advice and guidance.”

Mr. Massoumi noted that the site allowed for people such as community volunteers to sign up on others’ behalf. The site is also available in Spanish.

He noted that the program’s setup, which allows people to sign up, then wait for a notification based on priority, is better than other sites that require hours of refreshing websites in the odds they may luck into a rare opening.

Some local health authorities, including Washington, D.C., and West Virginia, are shifting to a similar preregistration system, which can help to level the playing field.

“There is this feeling where you don’t know where you stand, and the only way to secure your place is by refreshing a browser,” said John Brownstein, a Boston Children’s Hospital researcher who runs VaccineFinder.org, an online portal that helps people book vaccine appointments.

For Brittany Marsh, who owns a pharmacy in Little Rock, Ark., figuring out what to do with leftover doses was a daily headache.

She said the number of no-shows had increased as vaccines have become more available, and others have had to cancel at the last minute because they developed Covid-19 or were exposed to someone who did. Although sometimes people do call, she said, “more times than not, we just have a no-show.”

Ms. Marsh has been testing Dr. B’s service for a few weeks and said it saved her workers the hassle of calling a waiting list of other customers to quickly fill the open slots. With Dr. B, she said, “I know that they’re calling at least what we think is the right group of people to come get those shots, so that we don’t have to ever waste any.”

Dr. B has revealed few details about which providers have expressed interest in using its platform, other than to say the providers are based in 30 states and include doctors’ offices, pharmacies and the medical departments at large academic institutions.

The company collects sensitive personal information that it vows to closely safeguard, even though, because the company is not itself a medical provider, the data is not protected by the federal health care privacy law known as HIPAA.

When asked about his long-term plans for the company, Mr. Massoumi demurred, noting that the race to vaccinate was not going to end anytime soon.

“Right now, we just want to get the vaccines allocated in the best possible way,” he said. “I can’t think of a better use of money to help solve the pandemic, so we’re just heads down, focused on that.”

After ‘The Voice’ and BET, two Mississippians give one last concert before heading to L.A. Published 6:45 am Monday, January 30, 2023 … END_OF_DOCUMENT_TOKEN_TO_BE_REPLACED