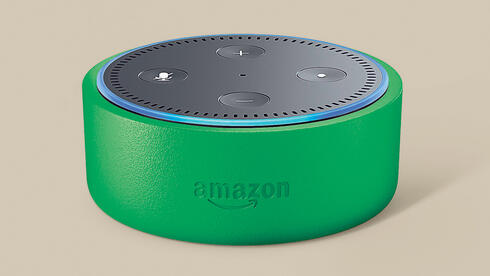 For those who have lived in Israel for the last five years, Alexa remains a mystery. A little black box that can be plugged into the wall and help homeowners with their shopping or chores is still something at which to marvel. Maybe some young immigrants to Israel have snuck a device from their country of origin to take home comforts with them, but the vast majority of locals still haven’t integrated such a tool into their kitchens or living rooms.

Devices like Amazon’s Alexa or Google Home have taken western countries by storm. According to Voicebot.ai, 2019 and 2020 saw 42% and 32% one-year growth in smart speakers installed in homes across the U.S – totaling 95 million households with half of those using them at least once a day. The last two years have seen those numbers plummet and growth is now down to 4% for one simple reason: everyone already has one.

“Ambient Computing means that computers are all around us, and they’re waiting for us to interact with them,” explained Navot Volk, Founder and CEO of Twang.io. “What we see is now the market, that’s it. Almost everyone got one and it’s not growing anymore. Everyone got one. You can’t grow way more than that. What you can do, which is what everyone is focusing on, is on adding more capabilities to it.”

Twang was founded last year but came out of stealth earlier this month. The company helps B2C enterprises reach customers on devices that are already on the Ambient Computing train. Companies that want to help customers order food via Alexa, or make a dinner reservation, can do so with the help of Twang. According to Volk, 90% of new cars in the UK already include some sort of voice recognition technology to help with commandments and directions.

And yet, it is another case of Israeli entrepreneurship helping a market that is all but void in Startup Nation. While simple technologies like Siri exist on all modern phones, Israelis hardly ever benefit from services that are fundamentally changing the way we shop, research, and plan – even though they might be the ones that are leading the way in their development. Israel has slipped below a threshold that is no longer a standard in the modern west, per numbers that prove hundreds of millions of people are already living in a world seen here as a futuristic one.

“Ambient is not something that is happening in the future, it is happening now,” Volk continued. “It is not in Israel because there is no support for Hebrew. Why would you invest in an exotic language that nobody speaks in the world, rather than do it in English, German, or Chinese?”

The defeatist attitude shared among Israelis who work tirelessly on these technologies only to export their accomplishments overseas is patently absurd. Many people speak English in Israel, as they do in Arabic, French, or Russian, and so there is ample room to integrate these technologies into society if the demand is there. It appears that neglecting Israel’s native language is a business decision, whereas neglecting the implementation of this technology entirely is a social one.

Israeli companies have imposed restrictions on themselves that have left the country trailing behind the moves that have been made globally in the last half-decade. When it focused on other advances, such as the implementation of Apple Pay six years after the U.S, or focusing on the relaunch of Uber after being stopped in 2017, it appears now is the time that Israel finally plays catch up with other parts of the first world on its own ground. Perhaps one day Ambient Computing might finally find its voice here, too.