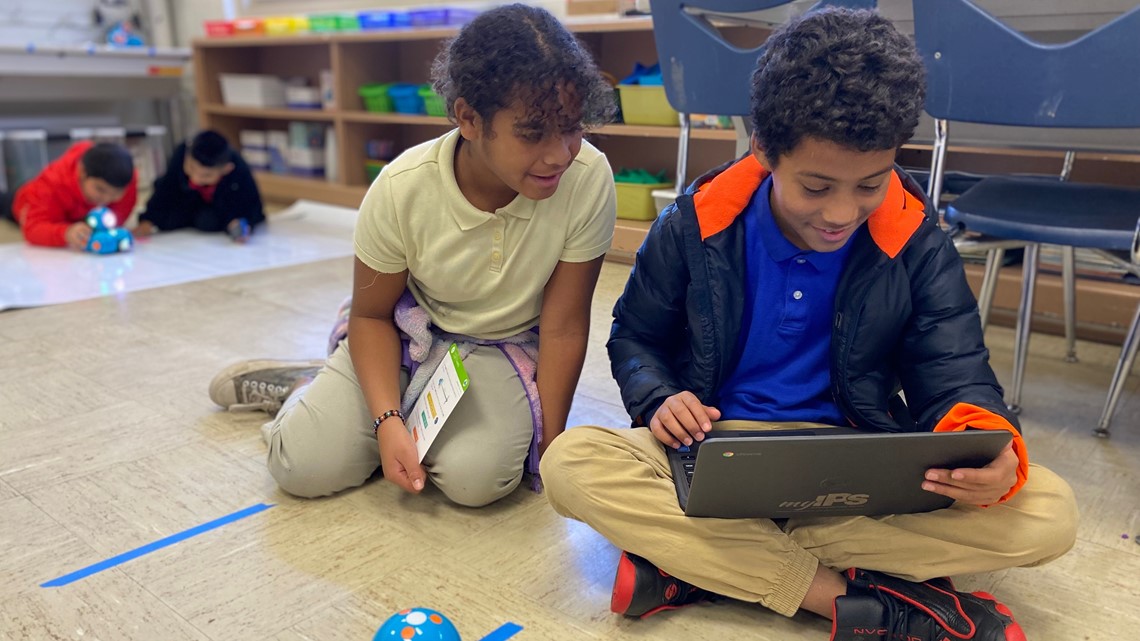 INDIANAPOLIS — It’s not every day you come across someone who knows how to code a computer, especially if that person is an elementary student.

At Indianapolis Public Schools’ Ernie Pyle Elementary School, Jenina Sorenson is teaching her students how to do just that.

“They know how computers work,” said Sorenson, “but how do computers really work?”

Sorenson is a STEM teacher with IPS. She has worked as an educator for more than 18 years and says digital technology could be the future for many of her students.

“They are able to take it from that big picture,” said Sorenson, “and we are able to put it in a little, smaller chunk for them to understand.”

Here’s how it all works: To make it fun for students, they interact with 18 blue robots, each with a different name.

The students then use their computers to sync up the robots, use programming to communicate commands, and code the robots to perform certain tasks.

IPS officials say this type of block-based computer coding is an entry-level assignment that allows learners to develop computational thinking.

Jada Matthews, a fourth grader in Sorenson’s class, said the computer coding lessons teach her other skills too, like patience and confidence.

“You are not going to get it the first time,” Matthews said. “Not everybody is perfect. … So, I just feel like, if you have courage in yourself, what you believe, you can achieve.”

After multiple attempts, Cruz-Lopez and his partner finally coded their robot, named Dory, to move on its own and draw a square.

While the challenges may seem fun for students, Sorenson said it is about learning lifelong skills at a young age. Currently, she teaches computer coding basics to K-6 students.

“I hope they will be able to take it with them in their future,” Sorenson said, “and be able to apply it to jobs that are out there.”

IPS officials said this is the first time this type of education has been available at Ernie Pyle School 90.

“I would feel happy if I did this again,” Cruz-Lopez said.

Marion Technical College has wrapped up its month-long UpSkill-A-Thon competition. MTC collaborated with Microsoft Philanthropies to launch the … END_OF_DOCUMENT_TOKEN_TO_BE_REPLACED

Knox College is currently responding to a system disruption caused by ransomware. A statement provided Friday by Knox College Vice President of … END_OF_DOCUMENT_TOKEN_TO_BE_REPLACED