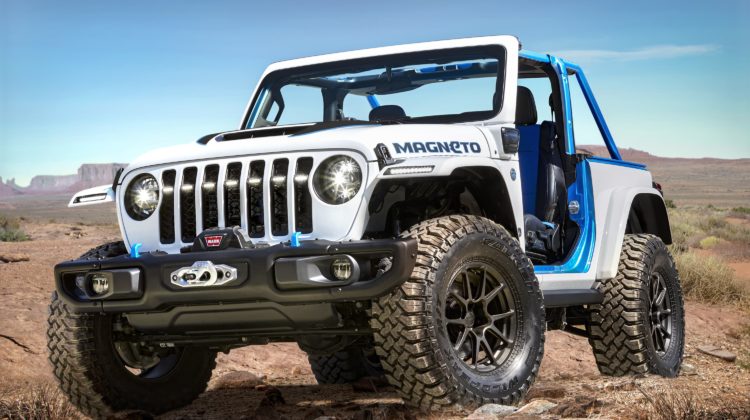 Jeep has unveiled a new all-electric version of its iconic Wrangler SUV, but consumers will likely have to wait at least a few years to purchase one.

The brand on Monday debuted the Wrangler “Magneto” as a concept vehicle, meaning it’s a custom product typically built by automakers to gauge customer interest or show the future direction of a vehicle or brand.

“It’s a sustainable, stealthy, rock-climbing force,” Jim Morrison, vice president of the Jeep brand in North America, said during a media event. “It’s a zero-emissions concept vehicle with Jeep 4×4 capability taken to the next level.”

Jeep executives have said every Jeep will offer some form of electrification going forward, but it has not confirmed an all-electric version of the Wrangler. The company recently started selling a plug-in hybrid electric version of the Wrangler under a new “4xe” moniker, a play on the brand’s off-road reputation combined with electrification. Plug-in hybrid electric models have batteries like EVs but also still have a traditional internal combustion engine.

The Jeep Wrangler Magneto concept is based off a two-door 2020 Jeep Wrangler Rubicon. To make it an EV, engineers swapped out its internal combustion engine and some supporting parts for electric components such as four batteries and an e-motor.

The vehicle is capable of up to 273 foot-pounds of torque and 285 horsepower. The Magneto runs 0-60 mph in 6.8 seconds. The company did not release the electric range of the vehicle.

The Magneto was unveiled alongside several other custom or concept vehicles for the Jeep Easter Safari, an annual off-road event for the brand in Moab, Utah. Jeep regularly uses the off-road event as a testing ground for the capabilities of its vehicles as well as a way to gauge customer interest in new products.

“The Moab Easter Jeep Safari has been a great tradition for more than half a century,” Morrison said. “It’s a place where we get to connect with our most die-hard off-road enthusiasts and the ones who are most loyal to our brand.”

After ‘The Voice’ and BET, two Mississippians give one last concert before heading to L.A. Published 6:45 am Monday, January 30, 2023 … END_OF_DOCUMENT_TOKEN_TO_BE_REPLACED

Despite increasing layoffs across the country, demand for IT pros remains high, especially for software developers and senior software … END_OF_DOCUMENT_TOKEN_TO_BE_REPLACED