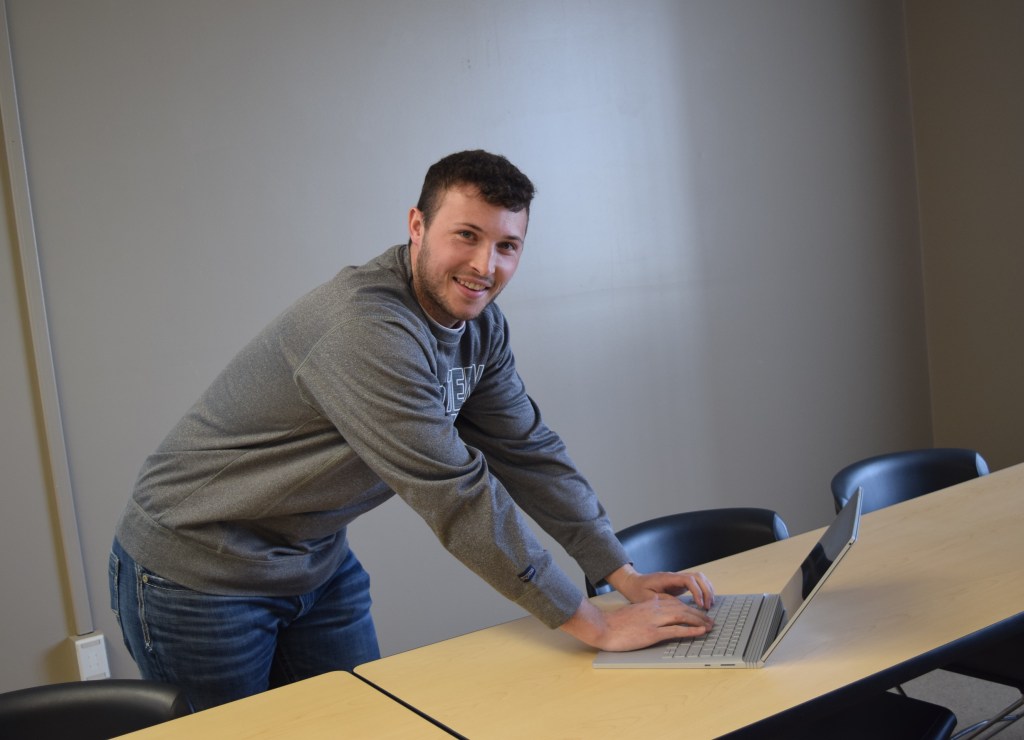 While Northeastern Junior College already had a strong focus on technology when it introduced its iPad initiative, this year technology became vital. Luckily, the college had Kade Roelle to lean on to help keep everything running smoothly.

Roelle’s Crystal Apple Award nominator Stephanie Weatherill described the academic technology coordinator as “extremely intelligent, helpful and patient,” and pointed out that he is carrying a tremendous workload at NJC.

Among Roelle’s responsibilities is overseeing D2L (formerly Desire2Learn) Brightspace, which is the Learning Management System for web-based learning and traditional face-to-face courses that delivers content, quizzes and WebEx class meetings to students from their instructors.

“Without that being handled efficiently, especially during COVID-19, instruction would have suffered irreparably,” Weatherill said.

Roelle graduated from Merino High School in 2016. It was by happenstance that he developed an interest in computer technology while in junior high. At age 12 his dad has bought him a gaming desktop computer with clear side panels, so all the components inside were visible.

“I was looking at it and was like, ‘oh, that looks interesting,’ so I decided it was a bright idea to take the side panel off and literally ripped the CPU (the brain of the computer) out of the computer from the motherboard,” he said.

As one can imagine, his dad was not impressed. He was told either learn how to fix it or he could buy a new one himself. Being 12 he had limited funds available, so he opted to try to fix it himself, and thanks to some research online and the help of his cousin who also builds computers, he was able to do just that.

From there, his interest grew. Throughout his junior high and high school years, Roelle built about fix or six gaming computers and was even hired by MHS Principal Lonnie Brungardt, along with some friends, to rebuild some of the school’s laptops and desktop computers over the summer, do some computer cleanups and run antivirus software on them.

“That’s what made me want to go into computer science or information technology,” Roelle said.

After graduating from MHS, he decided to attend NJC, and another fluke led him to end up with a job in the college’s IT Department. It all started when he was having a problem with his iPad and one of the ladies in the admissions office told him “go down to IT, they’ll get you figured out.” They did help him get his iPad connected and when they asked him what he was majoring in and he told them computer science, he was asked if he was interested in being a work-study/intern.

“I almost said no, because I was already working two jobs, but then they said I’d only have to work like 10 hours and I said okay, that’s extra money I could use,” Roelle said. “I’m glad I said yes; I’m loving it so far, they’ve been great.”

He graduated from NJC in May 2018 with an associate’s degree and is now working on a bachelor’s degree in information technology management from Colorado Christian University, which he should complete in the fall of 2021. From there he was thinking about getting a master’s degree in cybersecurity, but right now his focus is on working.

In Oct. 2018, he was hired on at NJC as a technical specialist and on Aug. 1, 2020, he was promoted to his current position. Even though he has moved up, Roelle continues to pick up some of the slack from his previous position, along with some of his other colleagues, as the position hasn’t been filled yet, but it will be soon.

As part of the IT Department, he works closely with staff and faculty, as well as students, managing all of the college’s iPads and camera systems, as well as NJC’s website, the Access NJC Portal and the D2L system. His job is basically “to make it as easy as possible for instructors to do what they need to do, because then it’s easier for the students to learn.”

While he had some experience with D2L from his previous position, when he was promoted it was the first time he was in charge of it and when COVID-19 it was “baptism by fire” for Roelle.

“When COVID did hit it was kind of like, oh gosh, we’re all learning remote now and do we have the infrastructure set up for that, can we provide that. That’s when my job especially was important because everything is online now, so there wasn’t any ‘oh, here’s a paper test you can take in-person in the classroom’, it’s here help the faculty and the instructors get this test uploaded into D2L, format it correctly so the students can take the quiz online,” Roelle said. “I know it was incredibly stressful for a lot of the instructors and it still kind of is, but the IT Department we tried our best to make sure the process is as easy as it can be for them.”

For him, the best part of the job is getting to work closely with faculty and students, “when I’m helping them one-on-one and just the gratitude, when they smile because I helped them get it fixed. It makes you feel really good inside when you know you’ve helped them and they’re happy about it.”

While he’s had job offers elsewhere, for Roelle it isn’t about the money, because he’s found somewhere he truly enjoys working.

“NJC, I think it’s a great place to work, we’re kind of like a family around here. I have great colleagues and my boss is…I don’t know if I’m ever going to work for a better boss in my life to be honest with you, she’s really mentored me, everyone down there are great mentors,” he said.

And his colleagues feel just as blessed to have him at NJC.

“He is one of the most pleasant, respectful, and hardworking people at Northeastern Junior College. He is a good man and very worthy of a Crystal Apple Award,” Weatherill said.

Each year, I become more hopeful for the future of equality for women and minorities in Arizona’s expanding technology ecosystem. And while great … END_OF_DOCUMENT_TOKEN_TO_BE_REPLACED

Not everyone in your organization is going to do the same work all the time, so it stands to reason not everyone will need the same set of tools … END_OF_DOCUMENT_TOKEN_TO_BE_REPLACED