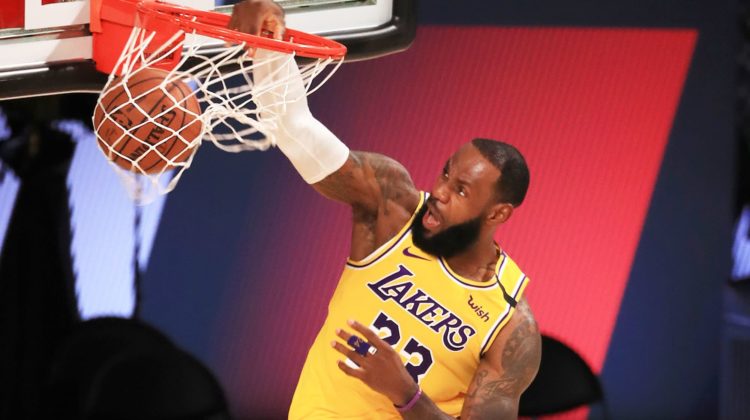 LeBron James of the Los Angeles Lakers at a game against the LA Clippers at ESPN Wide World Of Sports Complex on July 30, 2020 in Lake Buena Vista, Florida.

The Los Angeles Lakers are on the prowl for a new jersey partner and hired a French sports marketing agency to make it happen.

The team announced Wednesday it has partnered with Lagardere Sports and Entertainment‘s Sportfive as a third-party agency to find a new patch partner for the 2021-22 National Basketball Association season.

The Lakers, who won the 2020 NBA Finals, has a current jersey partnership with e-commerce company Wish, which ends after the current season. The deal was valued in the $12 million to $14 million range when it commenced in 2017.

In the release announcing the Sportfive agreement, the Lakers said, “the estimated sponsorship media value of the team’s jersey patch for the 2019-2020 season was $199 million.” The Lakers used research company Nielsen, determine the figure.

The Lakers said Sportfive would seek a new partner, either domestic or internationally, as teams can now designate three partners to freely leverage their intellectual property outside of the U.S. and Canada.

“We view the Lakers as a global brand with an international presence,” said Tim Harris, Lakers president of business operations, in a statement. “It’s important to us to partner with an agency whose reach equals our ambition. Sportfive understands the values of the Lakers organization and our desire to find a jersey patch sponsor that aligns with those values.”

Jason Miller, SVP of properties at Excel Sports Management, told CNBC there is “tremendous” demand patch partnerships due to the NBA opening up global marketing for its clubs.

Excel has sold patches for multiple teams, including the Boston Celtics, Chicago Bulls and Houston Rockets. The company is also overseeing the Minnesota Timberwolves patch offering.

The NBA generated roughly $150 million in revenue from its patch program, which was introduced for the 2017-18 season. The program lets companies pay to put their logo on a patch on the shoulder of each player’s jersey.

In an interview with CNBC in October, Amy Brooks, the league’s president of team marketing and business operations, said the NBA expects “significant growth” from the patch revenue but did not provide a specific growth percentage as the NBA is still fighting through Covid-19 losses.

Email service Outlook appears to be suffering an outage, predominantly affecting users in the United States.According to data from DownDetector, … END_OF_DOCUMENT_TOKEN_TO_BE_REPLACED

Virtual reality accessibility has gone from strength to strength in recent years, with Oculus VR leading the pack thanks to its all-in-one, … END_OF_DOCUMENT_TOKEN_TO_BE_REPLACED

“Certification can be a tool in the toolbox, but don’t be limited by that,” Dr. Miller said. “It’s about choices, and travelers do have the … END_OF_DOCUMENT_TOKEN_TO_BE_REPLACED