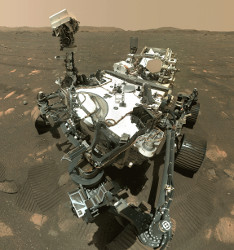 NASA’s Perseverance rover is equipped with a Linux-driven, Atom-based CompuLab COMEX-IE38 module designed to compress images. The rover also has a Qualcomm 801 Linux system like its Ingenuity copter, which is embarking on a new scouting mission.

As LinuxGizmos and many other sites reported in February, NASA’s semi-autonomous Ingenuity drone copter is equipped with an embedded Linux computer based on the Qualcomm 801 (formerly Snapdragon 801). Ingenuity, which has since run several successful test flights on Mars, making it the first craft to fly in the atmosphere of an extra-terrestrial planet, uses the Qualcomm 801 via the Qualcomm Flight platform for navigation and camera control and processing.

A Perseverance selfie (left) and detail view showing a few of its 23 cameras
Source: NASA
(click images to enlarge)

Since that article, Qualcomm informed us that there is also a Qualcomm 801 on the Perseverance rover dedicated to communicating with Ingenuity and downloading and processing the copter’s images. Meanwhile, IConnect007 reports that images from the Perseverance rover’s other cameras is compressed with the help of a CompuLab COMEX-IE38 module running Linux for easier delivery to Earth. Ingenuity, meanwhile, has completed its fourth flight and has begun a new scouting mission that should help in the design of an upcoming Dragonfly UAV heading for Titan in 2027 (see farther below).

Originally announced as Snapdragon Flight in 2015, the system is based on the Qualcomm 801. The commercial model runs Ubuntu, but the boards used on the Perseverance and Ingenuity run an F Prime Linux distribution developed by JPL for CubeSats. (More on F Prime and other open source software developed or used by the Jet Propulsion Laboratory’s (JPL) behind the Martian mission may be found in this ZDNet report.

Qualcomm Flight, which has since been superseded with a Qualcomm Snapdragon 820 based Qualcomm Flight Pro, is designed for Unmanned Aerial Vehicles (UAVs) such as Ingenuity. The platform’s Qualcomm 801 SoC is equipped with 4x Krait cores similar with Cortex-A15, in this case clocked down to 500Hz. The SoC’s Hexagon DSP plays a key role in real-time flight control.

Qualcomm Flight adds a Flight Development Board with 2GB LPDDR3, 32GB eMMC, and a microSD slot. The 58 x 40mm SBC supports 4K stereo VGA cameras and optic flow cameras and it offers dual-band 802.11n WiFi, Bluetooth 4.0, and 5Hz GNSS (GPS). The SBC also provides a variety of sensors, including an IMU and barometer. 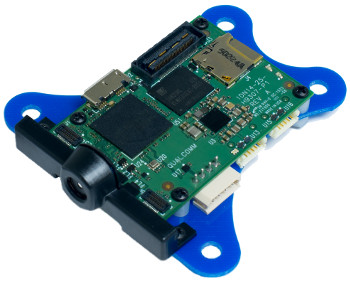 According to the Qualcomm rep, the Qualcomm Flight computer on the Perseverance communicates with the copter via RF and processes and “packages” the images for delivery to Earth. Qualcomm and NASA/JPL have long had a close relationship, helping to ensure quick debugging, said the rep.

Executives at Israel-based CompuLab knew that NASA had purchased a couple of its Intel Bay Trail Atom based COMEX-IE38 modules but had not been informed they were built into Perseverance until the craft landed on Mars on Feb. 18. According to IConnect007, two of the Intel “Bay Trail” Atom based COM Express Mini Type 10 modules flew to Mars, each powering two data storage units (DSUs) for storing camera images.

One of the DSUs was installed with a camera on the descent stage rocket. The device transmitted its images of the descent before being jettisoned to the Martian surface about 1,000 meters from the landing.

The other COMEX-IE38 controlled DSU continues to operate on the Perseverance rover, where it is charged with the task of receiving the RAW image streams from the rover’s 23 cameras via Ethernet. The system then compresses the images to a 480GB SSD for periodic uplink back to NASA via the orbiter. It is unclear if it also compresses Ingenuity’s images from Qualcomm Flight, which also appears to do some compression work. 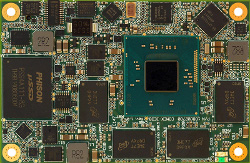 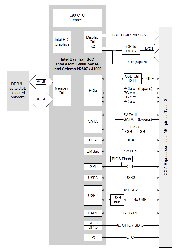 Maayan Ronen, Intel Israel’s Internet of Things sales lead, was quoted by IConnect007 as saying the Atom-based module was chosen due to its low power consumption and low heat output. “The density of the atmosphere is so low, the heat dissipation is much harder,” said Ronen.

It was unclear which Bay Trail model the system uses. The COMEX-IE38 is available with a single-core, 1.46GHz Atom E3815 with a 5W TDP. The 84 x 55mm module is loaded with up to 8GB of soldered DDR3L-1333 and an 8GB to 64GB SSD MLC. The COMEX-IE38 is further equipped with dual SATA II interfaces plus DDI and either eDP or LVDS. Other features include GbE, 4x PCIe, and 7x USB interfaces, among other I/O.

On April 20, the Ingenuity copter completed its fourth and longest flight yet. It traveled 133 meters to the south at an altitude of 5 meters to scout out a new landing zone before returning to base.

During the record-setting, 266 meter, 117-second round trip, the rotorcraft collected more images from its 13MP color camera and downward-facing, black-and-white VGA navigation camera. The Qualcomm 801 system stored more of the VGA nav images than usual to assist in future navigation. The 60 stored images include some stereo pairs, enabling the construction of 3D imagery of the surface.

The fifth flight will take a one-way trip to the new landing site, thereby completing the rotorcraft’s scheduled technology demonstration. Yet because Ingenuity is ahead of schedule and has performed “beyond expectations,” the copter will begin a new operations demonstration phase.

Ingenuity’s sixth flight, scheduled in about two weeks, will likely scout out terrain ahead of Perseverance. At a certain point, it will land close to Perseverance to upload its images.

The rover began its journey on April 26 when it traveled 10 meters. The rover will check out a nearby rock outcropping before heading for Jezero Crater’s fossil river delta to hunt for signs of life, among other investigations.

Ingenuity’s new operations phase should inform plans for NASA’s much larger Dragonfly UAV. The craft will launch in 2027 on a NASA spacecraft heading for Titan, the largest moon orbiting Saturn. It is unclear what computer system will power the UAV.

The spacecraft’s lander will attempt to land on the surface, following in the footsteps of the earlier Huygens probe, and then deploy the camera and sensor-laden Dragonfly UAV. While Mars posed some challenges for JPL due to its lightweight atmosphere, Titan’s atmosphere poses different and more difficult hurdles to the UAV’s designer, Johns Hopkins APL. The atmosphere is four times denser and its gravity is about 1/7th greater than Earth’s. The planet is geologically active and has lakes and rivers of methane that might potentially harbor life.

Marion Technical College has wrapped up its month-long UpSkill-A-Thon competition. MTC collaborated with Microsoft Philanthropies to launch the … END_OF_DOCUMENT_TOKEN_TO_BE_REPLACED

Knox College is currently responding to a system disruption caused by ransomware. A statement provided Friday by Knox College Vice President of … END_OF_DOCUMENT_TOKEN_TO_BE_REPLACED