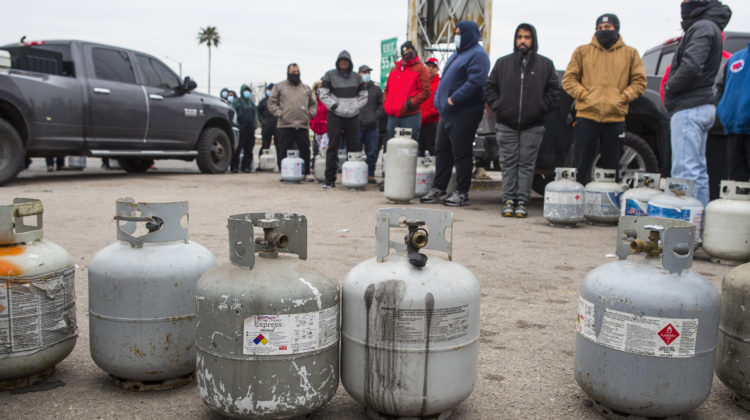 People line up to fill their empty propane tanks Tuesday, Feb. 16, 2021, in Houston. Temperatures stayed below freezing Tuesday, and many residents were without electricity.

Energy prices continued to climb as an arctic blast kept the South in a deep freeze Wednesday and left up to 3 million people in the state without power.

West Texas Intermediate oil prices rose 2% in morning trade, while gasoline futures were up nearly 3% though natural gas edged lower as the crisis in Texas and multiple other states continued. Heating oil futures were also higher.

With “oil wells and refineries offline, we could be facing a significant shortfall for a number of days, further tightening supply at a time when it has already been restricted and demand is expected to return,” wrote Craig Erlam senior market analyst at OANDA.

“This is only a short-term glitch though which is why we’re not seeing a more significant impact on oil prices, which are starting to show signs of being overbought,” Erlam added. “This shouldn’t come as a major shock after a 70% rally since early November. A lot of optimism around the economic recovery is now priced in so the market may be primed for a minor correction.”

The unusually harsh winter storms left more than 3 million in Texas without power, along with nearly 100,000 in Kentucky and more than 70,000 in West Virginia, according to PowerOutage.us.

The power outages raised questions about the stability of the electric grid, pushing some members of Congress to call for hearings on why the system failed.

“Ultimately, those responsible for the operation and management of our energy grid will have to answer for the glaring collapse of our energy infrastructure and inadequate communication to the public,” Rep. Van Taylor, R-Texas, said in a statement.

What kind of nexus is substantial enough to allow a state to tax a business’s sales in interstate commerce? In its 2018 decision in , the U.S. Supreme … END_OF_DOCUMENT_TOKEN_TO_BE_REPLACED