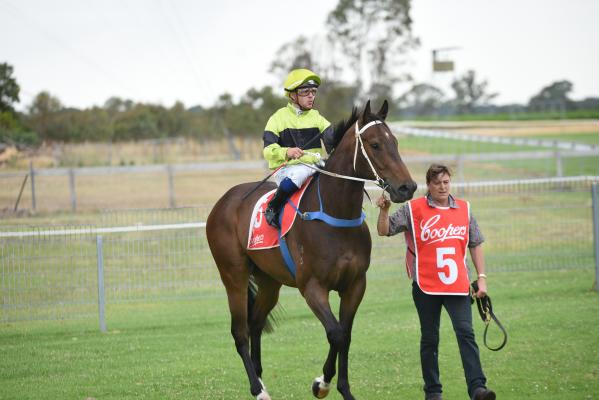 AT THE TOP OF HER GAME: Life has never been sweeter for Sue Murphy with the Naracoorte trainer winning this season’s local trainers premiership to make it five titles in the past decade.

THERE is no doubt Naracoorte trainer Sue Murphy is the trainer of the past decade in Limestone Coast racing.

The Naracoorte mentor has won half of the premierships in that period and secured her fifth local title at the final meeting of the local season at Bordertown last week.

Murphy started her rise to fame by first winning the premiership in 2012, then won it in consecutive years in 2015-16 before claiming it again in the past two years.

It was anything but beer and skittles this time around and it took her consistent performer Pewter to clinch the title at Bordertown from arch rivals Sue and Jason Jaensch.

The affable Murphy finished with 17 winners for the local season, one ahead of the Jaensch combination with Darryl Dodson (13) third.

So, does Murphy have any thoughts of retirement or scaling down her operation at her Racelands property, south of Naracoorte?

“It has been great and I’ve got no thoughts of giving it away,” Murphy stated.

“There are always new ones (horses) coming through the stable and I love seeing them develop.

“I’ve become smarter as I’ve gotten older and have trimmed back my team from around the 25-30 to 17.”

Ricky Bruhn was half a win behind Yasmin Black going into the meeting and the victory by his youngster Goliotus in the 1550-metre maiden saw Bruhn snare his fifth title since the award’s inception.

There was never any doubt about the winner of the jockey and apprentice’s premierships, as Jacob Opperman had it all parcelled up months ago.

The teenager finished with 23 wins, 24 seconds and 25 thirds, a country mile ahead of Dominic Tourneur (15) and Caitlin Jones (13).

FINISHED SEASON IN A BLAZE OF GLORY

CROWEATERS have often been critical of the scant disregard which Victorians give in regards to the form line out of South Australian racing.

However the boot was on the other foot at Bordertown when the Michael O’Leary trained Action In Cairns won the 1550-metre BM 58 handicap.

At his previous run in similar company at Casterton, Action In Cairns was the $2.30 favourite when an unlucky third after being held up for a run in the straight.

Instead of being a warm favourite at Bordertown, Action In Cairns blew from $5.50 out to an unbelievable $8 before winning in the final few metres for jockey Caitlin Jones.

That gave O’Leary a double for the day after Scenic Host ($8) convincingly won the 1100-metre maiden and it meant he ended the local season in fourth spot on 12 wins.

The win by Action In Cairns gave the Penola born Jones her 51st winner of the season in South Australia.

“I always enjoy coming back to the South East to ride as I get plenty of support from owners and trainers,” Jones said.

“Michael helped make it (career) all start for me by offering me an apprenticeship when I first came back from Victoria.”

It is rare for jockeys to publicly praise the condition of a racecourse, but Potter was full of praise for the Bordertown track.

“The curator here has done an excellent job for this meeting by leaving the grass long as we may have struggled to get through the meeting had it been cut short,” Potter stated after completing his winning double in the final event.

MADE IT THE HAT TRICK

The eight-year-old gelding chalked up the hat-trick of wins in Adelaide last Saturday night in the feature race for NR 74 rated pacers.

Vain Mara was the solid second favourite ($2.50) behind the odds-on pop Yankee Lincoln who had been racing in stronger company in Melbourne of late.

But it was all one way traffic for Vain Mara and driver Samantha Pascoe, leading all the way to score easily by seven metres and recording a slick mile rating of1.57.9.

KEN Gazzard, a well known businessman on both sides of the border, passed away earlier this week at 92 years of age.

He was a life member of the Mount Gambier Racing Club and was one of the staunchest supporters of the club.

Gazzard served on the committee for many years and raced many gallopers, mainly with local trainer Denis McNamee, including the brilliant performer Padstow.

Meanwhile, the Racing Bonanza fundraiser held recently out at Glenburnie for the Mount Gambier racing club was again a resounding success.

“We had 134 people turn up on a bleak winter’s night and raised $12,000 for the club,” delighted organiser Kym McLean stated.

JOCKEY Jamie Kah received all the publicity (and quite rightly so) for being the first rider to win 100 races in metropolitan Melbourne in one season last weekend.

However, a little known jockey (by Melbourne standards) had the racing world and media on edge in the concluding stages and almost put celebrations on hold.

Our very own Jacob Opperman was aboard the fast finishing All Of Brighton (second) and would have upset the applecart in another 50 metres.

On the return journey from Melbourne on Sunday, Opperman popped into Ballarat for four rides and made it a worthwhile exercise by booting home the last winner.

That was aboard Capricorn Ridge ($7.50) for Murray Bridge trainer Matty Seyers which came from near last for an easy six-length win.

THE Opperman name has been in the racing spotlight for many months now, due to the deeds of apprentice Jacob Opperman.

Last Monday at Murtoa was his fathers turn to keep the Opperman flag flying.

The in-form Mulga Lil, trained by Jamie Opperman and ridden by Declan Bates, made it three wins from her past five starts by leading all the way in the 2050-metre BM 58 handicap.

“She likes to run them (opposition) into the ground and she toughed it out well to give Declan a birthday present,” Opperman stated post race.

Half an hour earlier at the same venue, a brilliant Dean Holland ride enabled the Bob and Kane Post trained Fast Foils ($12) to beat more fancied rivals in the 2050-metre maiden.

Fast Foils was way over the odds considering his recent Warracknabeal run when a gutsy third after racing three wide.

Amazon is freezing corporate hiring in its retail business for the rest of the year, according to an internal announcement obtained by The New York … END_OF_DOCUMENT_TOKEN_TO_BE_REPLACED

Last week, Idaho Gov. Brad Little announced the appointment of Alberto Gonzalez as the new administrator for the Office of Information Technology … END_OF_DOCUMENT_TOKEN_TO_BE_REPLACED