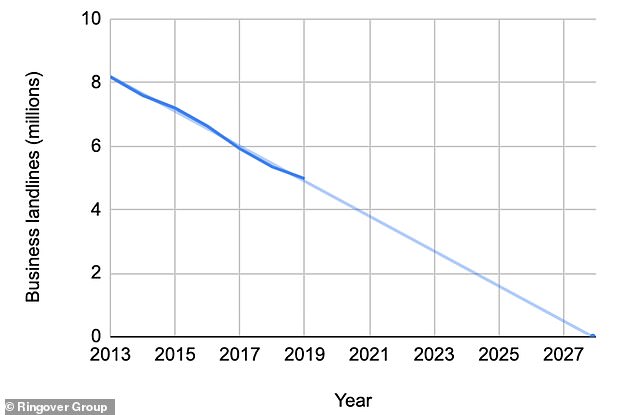 The office landline will likely become extinct in November 2028, new analysis predicts, with business numbers falling 370,000 in a year to 4.98million, according to the latest Ofcom data.

This is a dip from 2013 when there were more than eight million landlines in the UK’s office and workplaces, business communications service Ringover Group revealed.

It predicts this will fall below two million in spring 2024 and drop under one million in early 2026.

However, while some believe the office landline will be no more, others think it will be around for years to come.

The office landline will likely become extinct in November 2028, according to expert analysis

Why are landlines changing?

Traditionally, landline phones rely on legacy analogue networks which have been around for decades.

However, over the next five years, there will be a UK wide industry-led program of analogue voice switches closures which means providers will stop offering voice landline services using this ‘aging’ technology, according to Virgin Media.

This is because the technology behind this – the ‘public switched telephone network’ is reaching the end of its life and becoming increasingly costly and difficult to maintain.

If continued, the phone service would become unreliable and not provide the level of service customers expect.

In future, this will mean customers will make calls using voice over internet protocol (VoIP) which uses a data or broadband connection to carry the calls.

Residential customers can already choose to use VoIP today, and many businesses have already been using VoIP services for years.

Through VoIP, customers will still be able to pick up a phone and make a call as they would today – but the call is carried over an internet connection instead.

Many businesses have been using this system for years as they provide a range of benefits such as creating the ability to take complete control over call routing – to the next available sales person, for example, or a different office or call centre during busy times.

This, consequently, has led to a decline in landlines being used.

Will the landline really become extinct?

Despite many believing landlines may be coming to an end, others think they still have a place in our homes and businesses.

Some experts say the popularity of other forms of communication including Zoom and Microsoft Teams, thanks to lockdown, will contribute to the demise of the office phone.

Ernest Doku, telecoms expert at Uswitch, said: ‘Over a quarter of UK households admit they never use their landline so if the business world follows suit the office phone has the potential to become a thing of the past.

‘Lockdown accelerated change for many businesses across the country and one central landline isn’t always a viable solution, especially if multiple teams are working from home.

‘IP-based landlines and the flexibility they provide are already dominating the working world, due to the mobile nature of our work lives.

‘While other internet-based communications, such as Zoom, Google Meet or Microsoft Teams, have become a necessity for businesses to thrive and survive during unprecedented times.’

Renaud Charvet, chief executive at Ringover Group, added: ‘The office landline has kept businesses running for almost a hundred years, so it will be quite a milestone when the last one is terminated.

‘Few people should mourn their demise, however, as the alternatives give businesses a huge opportunity to turn a standard business phone into a real productivity tool designed for modern workers.

‘With millions of people working from home, the office landline looks increasingly redundant, and the data suggests that they will only be with us for another six years or so.’

Ringover Group said it has seen demand for VOIP’s soar 230 per cent in the past year as millions of users in Europe worked from home during lockdown.

However, others say there are still many places of work where physical location is essential to being contacted there, for example, cafes, barbers or pubs.

As such, a landline will likely remain for some time.

A spokesperson for Virgin Media said: ‘While the technology powering our phone calls is changing, it’s hard to imagine a world in which we’ve done away with landline phones completely, and they remain an important part of our commercial offering for some time to come.’ 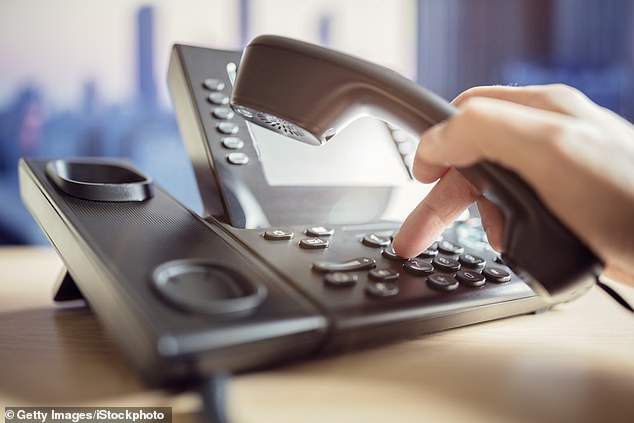 Previous research also showed the number of households with a landline has fallen by four million since 2000.

As of April this year, there were around 22million connections in the UK, down 15 per cent from its peak at the turn of the century when 95 per cent of homes had one, according to data from Uswitch.

It found the landline is in terminal decline, with five million households never using theirs for phone calls.

One of the reasons households may be using landlines less in the increase in scam telephone calls they receive.

Previous research found that most Britons with a landline telephone now receive more calls from scammers than they do from their loved ones.

This has put many off answering the phone as they believe it will be a nuisance call.

However, those struggling with these calls should make sure they have registered for the Telephone Preference Service, which should reduce the amount of sales and marketing calls you receive.

Some links in this article may be affiliate links. If you click on them we may earn a small commission. That helps us fund This Is Money, and keep it free to use. We do not write articles to promote products. We do not allow any commercial relationship to affect our editorial independence.

[ad_1] Superconducting quantum computers are huge and incredibly finicky machines at this point. They need to be isolated from anything that might … END_OF_DOCUMENT_TOKEN_TO_BE_REPLACED