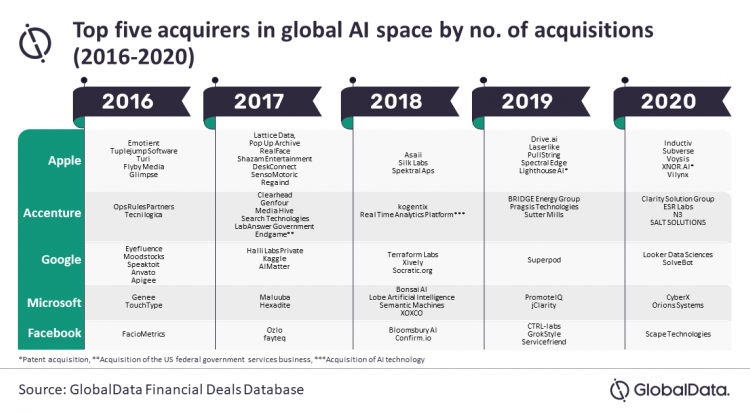 According to GlobalData’s deals database, five companies dominate when it comes to AI business acquisitions.

Four of these companies are US tech giants, with Apple leading the pack and Google, Microsoft and Facebook following behind.

The other company in the top five is Accenture, the Irish multinational providing consultancy and professional services to businesses worldwide.

Tracking mergers and acquisitions from 2016 to 2020, Apple comes out on top with 25 acquisitions of AI companies in the four-year period.

“Apple has been ramping up its acquisition of AI companies, with several deals aimed at improving Siri or creating new features on its iPhones,” said GlobalData senior analyst Nicklas Nilsson.

Nilsson said that Apple’s AI shopping spree is an effort to catch up with Google’s voice assistant and Amazon’s Alexa technology. “Siri was first on the market, but it consistently ranks below the two in terms of ‘smartness’, which is partly why Apple is far behind in smart speaker sales,” he said.

Apple has also made strategic moves to maintain its dominant position as a smartwatch maker.

“The acquisition of Xnor.ai last year was made to improve its on-edge processing capabilities, which has become important as it eliminates the need for data to be sent to the cloud, thereby improving data privacy,” said Nilsson.

Accenture slides in at second place with 17 AI-centric acquisitions in the four-year period, sweeping up a broad set of applications for this technology.

The acquisition of Munich-based ESR Labs was announced in March 2020 to expand Accenture’s capabilities in automotive software. Also in 2020, the Irish firm completed the acquisition of Atlanta company N3 to combine its technology with the Accenture SynOps platform and enhance data-led insights for salespeople.

2017 was a big year with six AI acquisitions from Accenture, including UK company Genfour, which became part of the acquiring firm’s centre of excellence for intelligent automation.

Accenture’s appetite for acquisitions shows no sign of abating in 2021, though AI hasn’t been a specific area of focus. Among many deals already announced in the first quarter of the year is the acquisition of leadership and talent consultancy company Cirrus, while Germany’s Fable+ and California’s Imaginea were acquired to boost Accenture’s cloud offerings.

Following Accenture in the top five are Google, Microsoft and Facebook. “The US is the leader in AI, and the dominance of US tech giants in the list of top acquirers also indicate that these companies have some defined AI objectives,” said Nilsson.

Between them, Apple, Google, Microsoft and Facebook undertook 60 acquisitions in the AI tech space from 2016 to 2020.

“AI has remained a key focus area for tech giants and growing competition to dominate the space has resulted in an acquisition spree among these companies,” added GlobalData analyst Aurojyoti Bose.

Bose also said that job analytics data from GlobalData reveals that these top five acquirers are also on a talent-hiring spree, collectively posting more than 14,000 jobs in AI during 2020 alone.

The post One Irish multinational is in the top five giants buying up AI companies appeared first on Silicon Republic.

The Pentagon has split a $9bn contract for cloud computing services among Google, Oracle, Amazon and Microsoft, one year after scrapping a previous … END_OF_DOCUMENT_TOKEN_TO_BE_REPLACED

(TNS) — Among all colleges and universities in Tennessee, only 45 percent of students who enter college ultimately get either an associate's degree … END_OF_DOCUMENT_TOKEN_TO_BE_REPLACED

An increased reliance on technology goes hand-in-hand with growing avenues for cyberthreats, and courts are no strangers to the soaring wave of data … END_OF_DOCUMENT_TOKEN_TO_BE_REPLACED