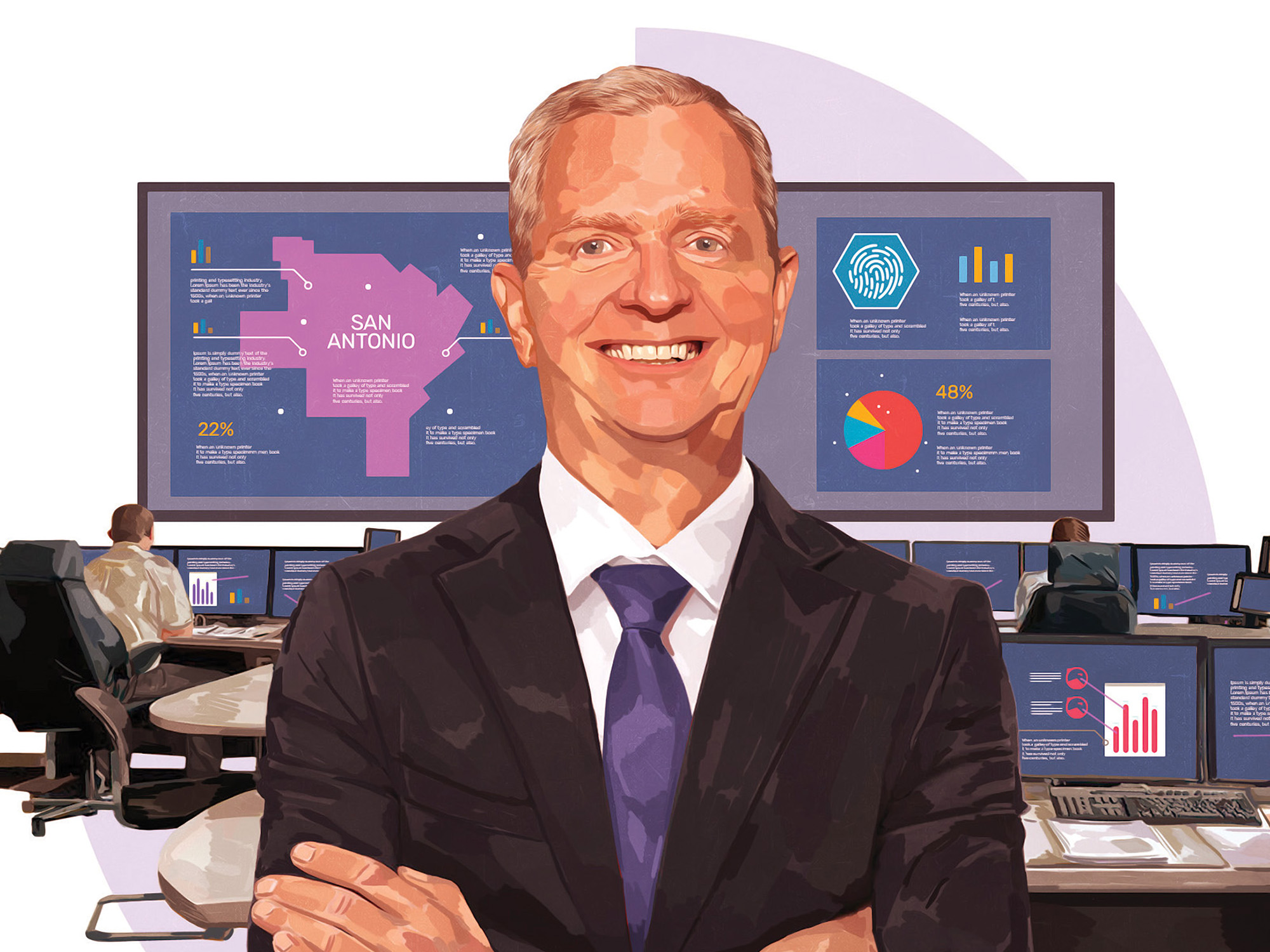 In 2019, U.S. Air Force Brigadier General (Ret.) Guy Walsh, 64, was named the executive director of the UTSA National Security Collaboration Center (NSCC), which broke ground this winter along San Pedro Creek downtown. Walsh spent 25 years as a pilot in the Air Force, providing close air support for both U.S. and coalition troops. In 2010, a year after retiring, he was tapped by the NSA’s director and commander of the U.S. Cyber Command to focus on cyber as the newest combat command organization in the Department of Defense. He later became an original member and deputy director of the Capabilities Development group, which was tasked with integrating USCYBERCOM’s cyberspace capability development, and now looks to elevate San Antonio’s position in the fields of cybersecurity and data science. “A lot of people have an opportunity to command or lead an organization, but very few have the opportunity to stand it up from scratch,” he says.

You have experience working with government, industry and academia. How do those work together to improve national security?

Let me start with the relationship between the government and industry. My grandmother worked in a box factory putting stuff together back in World War II. It was the industrial base of the U.S. that gave us that success in terms of aircraft building. You don’t move a military forward unless you have that industrial base supporting it. As we started to cut costs in the government, we became much more dependent on industry for many years. You can start with Silicon Valley and some of the work that was done here in San Antonio, building from computers to chips to technology. The relationship between government and industry has been building over the past 40 years.

How does academia fit in?

The academic piece is the interesting part because that’s exactly why we stood up here at San Antonio—we’re not creating the workforce that is needed, whether it be in industry or in national security or in the federal government. Cybersecurity is the one that everybody reads about, but it’s not just cybersecurity, right? It’s all about data science. It’s all about artificial intelligence. What we’re trying to do is be able to create that workforce in academia. If you don’t bring in the academic part, you don’t have the workforce that you really need out there.

What does the next 10-20 years look like for everyday folks as artificial intelligence continues to infiltrate our lives?

Part of our focus on the national security side is (being aware of the fact that) just as many positive changes as there are, we’re starting to see some of those same things on the bad guy side, right? That’s a big focus of what we’re trying to do within the broader national security spectrum is to make sure that people can actually enjoy the advances of these technologies that are coming about.

Why is having this new school building in the downtown area so significant?

I really want the NSCC and School of Data Science to be at the forefront of San Antonio. What we’re trying to do is make sure people understand that San Antonio is the place where this technology is happening. I want the building itself to be an education center. The bottom floor is really about drawing the public in to understand what the studies at the School of Data Science are providing to folks there. I really want the education for the center to attract visitors so they can look and say, “Hey, that’s what I want to do when I grow up.” We will see the police and doctors. We will see these folks in society and say, “That’s what I want to be.” You don’t put it out in the middle of nowhere, right? You put it in the heart of the city, where you’re going to have that visibility. I think that’s a big piece of what we’re trying to do there. It’s not just about the tourists, it’s about the people of San Antonio and getting them excited.

How will the campus impact downtown’s tech sector?

When you talked about the three pieces there: the government, the industry, and the academic building, that relationship between the technologies and all the groups that are coming into San Antonio is absolutely huge. We want to be able to attract other businesses and grow and expand the businesses that are here in the technology sectors.

It’s all supply and demand. They’re only going to come and stay in San Antonio if we could provide those workforces. It’s an important piece to say, “Yes, San Antonio has an ability to meet our workforce requirements here.”

Where will this school fall on the national landscape once it’s up and running?

I think it will be relatively unique. The School of Data Science is not one school, it goes across at least three of our colleges. It has the College of Engineering, the College of Sciences and the College of Business, which has nationally ranked programs in cybersecurity and data science/data analytics.

We spent the last year doing the design, and when I say the design, I mean floor by floor, room by room, chair by chair. I jokingly say we put the restrooms on one side so the industry people have to go through academia and the academics have to come through our area. Having that regular interaction really makes this facility and this approach that UTSA has taken unique compared to anything else I’ve seen across the nation.

We're all about the IT leader here at Computing - whether that's the CIO, CTO, IT director, chief architect or any one of dozens of other titles. … END_OF_DOCUMENT_TOKEN_TO_BE_REPLACED

A strategic relationship between Türk Telekom and Korea Telecom (KT) was launched on Sunday. This initiative will promote cooperation in the areas of … END_OF_DOCUMENT_TOKEN_TO_BE_REPLACED