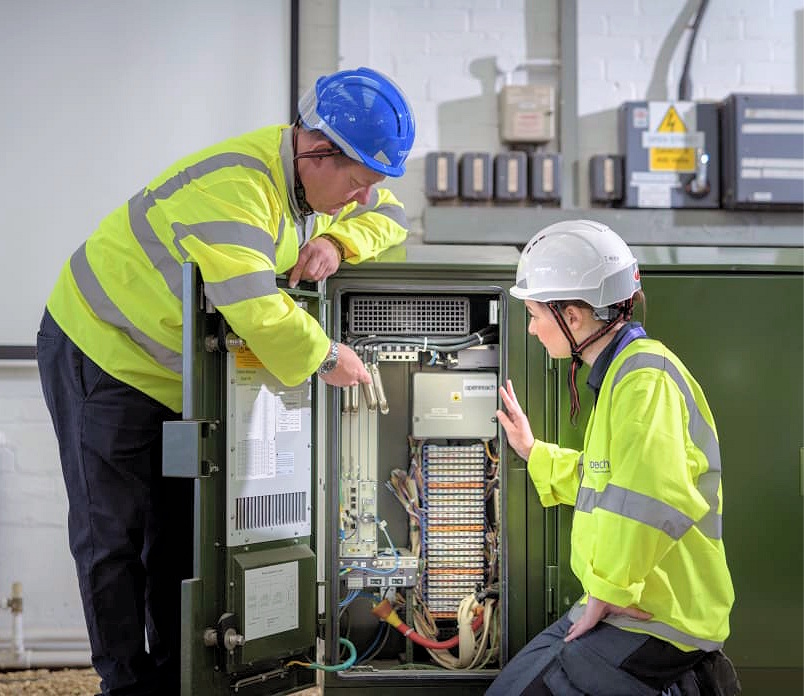 Openreach (BT) has today taken the next step towards upgrading from analogue to digital services via the issuing of a “stop sell” notification in the trial area of Mildenhall (Suffolk), which means that new customers will now only be able to take all-IP (digital / VoIP) based phone and broadband services (no more analogue phones etc.).

Unlike the existing trial in Salisbury, which is focused on the separate but still broadly related exchange based upgrade process for Fibre-to-the-Premises (FTTP) broadband technology, the Mildenhall trial is more focused on the move from analogue telephony to digital (Internet Protocol) based voice services (both on copper and fibre lines).

NOTE: Openreach currently looks after 192 million kilometres of network cable, 110,000 green cabinets, and 4.9 million telephone poles and junction boxes. In a typical year, more than 9.9 million engineering jobs are carried out by the company’s 25,000 engineers, many of them in remote and rural locations.

The Mildenhall exchange was first chosen in 2019 (here) because it’s considered to be highly representative of a typical UK exchange area in terms of geography, the range of providers (ISPs etc.) offering Openreach services and its mix of businesses and consumers.

As per the original plan, Openreach has now (effective from 4th May 2021) issued a “stop sell” notification on non-IP services for Mildenhall. For existing customers this won’t have an immediate impact, but any new, upgrading, regrading or switching customers will now find that they can no longer take traditional analogue copper phone line and broadband services (e.g. all new products become digital).

In practice, you’ll still be able to order things like ADSL (SOTAP), FTTC (SoGEA) and G.fast (SoGfast) based broadband products just like you can today, which all still use copper lines, as well full fibre FTTP, but now if you want to attach a phone service to these then it’ll be a digital-only (all-IP) connection that goes over broadband (e.g. plugging an analogue or DECT phone handset into a router instead of your wall socket). Come December 2025 this will be the norm for everybody.

“This is an important early step in upgrading the UK to ‘Voice over IP’ technology and the withdrawal of products and services that run over the traditional telephone network – which is due to close in 2025. We’re working closely with service providers to make sure any changes happen as smoothly as possible.

We also have extensive learning from our recent work in Salisbury, which became the first city in the UK to rely solely on digital services.”

The trial is all about helping ISPs to adapt with new products or services, as well as helping homes and businesses to adapt when services that rely upon the older analogue network (e.g. lifts and certain alarm systems) stop working due to a lack of compatibility (this change is steadily becoming the norm across the world, not only in the UK). The wider industry is slowly adapting, but some people may need to upgrade their kit.

One other challenge here could come from landline-only customers (those without a broadband service), which may now face a weaker choice of providers because many ISPs have not yet replaced their phone-only packages with an all-IP based digital alternative. Some people may also need to buy a battery backup (powerbank) system for their router, otherwise they may lose both phone and broadband during a power cut (older analogue handsets could still be directly self-powered via Openreach’s copper lines).

Otherwise, Openreach has setup a webpage with further details for people in Mildenhall. We should add that the local “stop sell” notification is only the first phase of this process, with the next phase being the withdrawal of older services by December 2022.

We're all about the IT leader here at Computing - whether that's the CIO, CTO, IT director, chief architect or any one of dozens of other titles. … END_OF_DOCUMENT_TOKEN_TO_BE_REPLACED

A strategic relationship between Türk Telekom and Korea Telecom (KT) was launched on Sunday. This initiative will promote cooperation in the areas of … END_OF_DOCUMENT_TOKEN_TO_BE_REPLACED