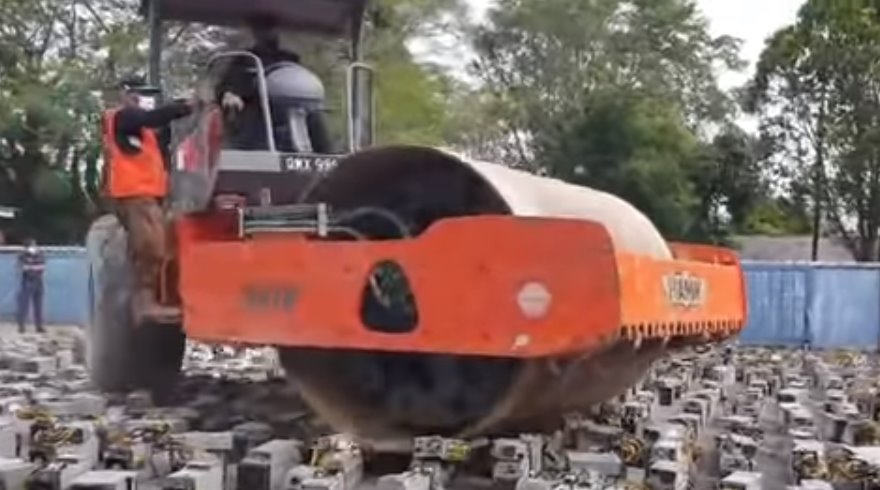 Industrial-scale Cryptocurrency mining operations have definitely become something of a major problem, particularly in developing countries where the attraction of low energy prices and/or low-key locations often tempts people into setting up their base there. In a public demonstration against illegal mining, however, Malaysian police have released a video in which they publically steamrolled over 1,000 ASIC mining computers to act as both a public demonstration and warning!

The video, courtesy of YouTube channel ‘dayakdaily‘ (which you can check out below) shows around 1,000 ASIC mining systems all neatly laid out on the floor. Then, under apparent orders from the police, a steamroller promptly drives all over them. – You might, however, be wondering why they did this? Mining cryptocurrency isn’t, after all (and at least by and large for most countries) an illegal activity right?…

Well, that depends on how you do it. You see, this factory, which was reportedly set up by 6 people, was apparently stealing electricity to run all these ASIC mining systems. Therefore, as something of a public demonstration as to what will happen if you’re caught engaging in this activity, the Malaysian Police clearly decided that a public show of force was necessary just to drill the point home for anyone else who might happen to have a metaphorical extension cable dangling from a neighbouring unit.

What Do We Think?

While it is, of course, mildly sad to see so much tech go to waste, it does drill the point home pretty clearly that while Malaysian authorities may apparently barely tolerate legal mining operations in their country, that patience runs pretty thin when it comes to such setups that rely on stealing electricity to boost their profits. All I can say is that I’m glad it was a bunch of ASIC machines rather than masses of graphics cards! That would’ve been heartbreaking!

What do you think? – Let us know in the comments!

[ad_1] Superconducting quantum computers are huge and incredibly finicky machines at this point. They need to be isolated from anything that might … END_OF_DOCUMENT_TOKEN_TO_BE_REPLACED