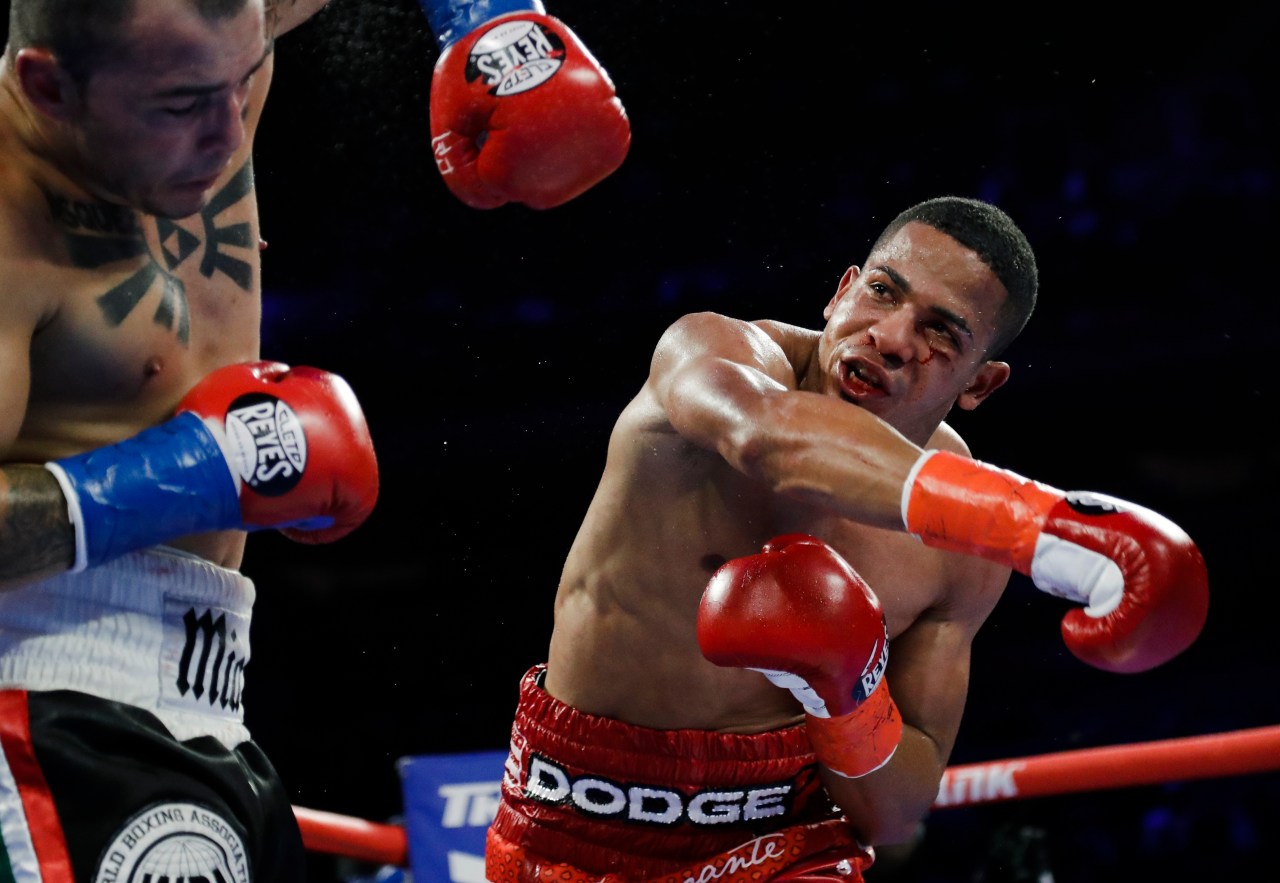 FiLE – In this April 20, 2019 file photo, Puerto Rico’s Felix Verdejo, right, punches Costa Rica’s Bryan Vazquez during the fifth round of a lightweight boxing match in New York. Verdejo has turned himself in to federal agents on Saturday, May 1, 2021, just hours after authorities identified the body of his 27-year-old lover Keishla Rodríguez in a lagoon in the U.S. territory, a couple of days after she was reported missing. (AP Photo/Frank Franklin II, File)

The U.S. Attorney’s Office said late Sunday that Verdejo was being charged with kidnapping and carjacking resulting in death and with intentionally killing an unborn child.

A criminal complaint filed by the FBI accuses Verdejo of punching Keishla Rodríguez in the face and injecting her with a syringe filled with an unidentified substance bought at a public housing complex. It alleges he then bound her arms and feet with wire and tied a heavy block to her before throwing her off a bridge at 8:30 a.m. Thursday.

The complaint states that Verdejo then shot at Rodríguez’s body as he stood on the bridge.

The complaint says a witness it did not identify helped Verdejo kidnap and kill Rodríguez.

Rodríguez was found in a lagoon near the U.S. territory’s capital Saturday, a couple of days after she was reported missing. She was identified Sunday via dental records, Puerto Rico’s Institute of Forensic Science said in a statement.

Verdejo and his attorneys previously declined comment, and police said the boxer did not originally cooperate and refused to answer questions.

Rodríguez’s family said she was pregnant with Verdejo’s child. Keila Ortiz, the victim’s mother, told reporters that her daughter had called her before she vanished Thursday and told her that Verdejo was going to her house to see the results of a pregnancy test.

“I told her, ‘Be careful,’ because he had already threatened her,” Ortiz said. She said Verdejo had told her daughter not to have the baby, mentioning his career and family.

Verdejo is married and has a young daughter but had known Rodríguez since middle school and kept in touch with her, her parents said. They reported her missing after she didn’t show up for her job at an animal grooming business.

Verdejo (27-2, 17 knockouts) represented Puerto Rico at the Olympics in 2012, the same year he became a professional boxer competing in the lightweight division. His career was temporarily sidetracked after a 2016 motorcycle accident that put him in the hospital.

The case has outraged many in Puerto Rico, where another woman was recently found burned to death after she filed a domestic violence complaint that a judge dismissed. A Superior Court judge has announced an investigation into that decision.

Hundreds of people gathered Sunday at a bridge that crosses the lagoon where Rodríguez’s body was found to demand justice for her and other women killed, with some throwing flowers into the water below.

[ad_1] Superconducting quantum computers are huge and incredibly finicky machines at this point. They need to be isolated from anything that might … END_OF_DOCUMENT_TOKEN_TO_BE_REPLACED