Superconducting quantum computers are huge and incredibly finicky machines at this point. They need to be isolated from anything that might knock an electron’s spin off and ruin a calculation. That includes mechanical isolation, in extreme vacuum chambers, where only a few molecules might remain in a cubic meter or two of space. It includes electromagnetic forces – IBM, for example, surrounds its precious quantum bits, or qubits, with mu metals to absorb all magnetic fields.

And it includes temperature. Any atom with a temperature above absolute zero is by definition in a state of vibration, and any temperature more than 10-15 thousandths of a degree above absolute zero simply shakes the qubits to the poin where they can’t maintain “coherence.” So most state-of-the-art quantum computers need to be cryogenically cooled using complex and expensive equipment before the qubits will maintain their state for any length of time and become useful.

Extreme vacuums, mu metals and microkelvin-temperature cryogenic cooling: this is not a recipe for affordable, portable or easily scalable quantum computing power. But an Australian-born startup says it has developed a quantum microprocessor that needs none of these things. Indeed, it runs happily at room temperature. Right now, it’s the size of a rack unit. Soon, it’ll be the size of a decent graphics card, and before too long it’ll be small enough to fit in mobile devices alongside traditional processors.

If this company does what it says it can, you’ll be able to integrate the advantages of quantum into computers of just about any size, freeing this powerful new technology from the constraints of supercomputer size and expense. Quantum software and calculations won’t need to be done through a fast connection to a mainframe or the cloud, it’ll be done on-site where it’s needed. Pretty disruptive stuff.

Quantum Brilliance was founded in 2019 on the back of research undertaken by its founders at the Australian National University, where they developed techniques to manufacture, scale and control qubits embedded in synthetic diamond.

This is complex business, so we’ll throw over to the Quantum Brilliance whitepaper for a technical description: “Room-temperature diamond quantum computers consist of an array of processor nodes. Each processor node is comprised of a nitrogen-vacancy (NV) center (a defect in the diamond lattice consisting of a substitutional nitrogen atom adjacent to a vacancy) and a cluster of nuclear spins: the intrinsic nitrogen nuclear spin and up to ~4 nearby 13C nuclear spin impurities. The nuclear spins act as the qubits of the computer, whilst the NV centers act as quantum buses that mediate the initialization and readout of the qubits, and intra-and inter-node multi-qubit operations. Quantum computation is controlled via radiofrequency, microwave, optical and magnetic fields.”

This field itself is not new – indeed, room-temperature quantum qubits have been around experimentally for more than 20 years. Quantum Brilliance’s contribution to the field is in working out how to manufacture these tiny things precisely and replicably, as well as in miniaturizing and integrating the control structures you need to get information in and out of the qubits – the two key areas that have held these devices back from scaling beyond a few qubits to date.

“Because diamond is such a rigid material,” says QB co-founder and COO Mark Luo over a Zoom call, “it’s really able to hold a lot of these properties in place – that allow these quantum phenomena to be more stable compared to other systems out there. Given that rigidity, we can actually leverage off a lot of pre-existing classical control systems.”

“The fundamental property we’re using,” says new hire Mark Mattingley-Scott, who will oversee operations for the company in Germany, “is nuclear spin, and not the spin of an electron. An atom cares a lot less about thermal vibrations, for example, than an electron, so this way we can run them at room temperature. In the nitrogen vacancy, there’s a hole, and through that we’re able to interact with the qubits. There are multiple interactions, so we actually get potentially multiple qubits per vacancy.”

The company has already built a number of “Quantum development kits” in rack units, each with around 5 qubits to work with, and it’s placing them with customers already, for benchmarking, integration, co-design opportunities and to let companies start working out where they’ll be advantageous once they hit the market in a ~50-qubit “Quantum Accelerator” product form by around 2025. “We think over a decade,” says Luo, “we can even produce a quantum system-on-a-chip for mobile devices. Because this is truly material science technology that can achieve that.”

“In terms of commercial deployment,” says Luo, “we have the Pawsey Supercomupting Center, which is currently the Southern Hemisphere’s largest supercomputing center, co-owned by CSIRO and some other universities. We established basically Australia’s first supercompuing quantum innovation hub, and we set up a Pawsey Pioneer program where industry and research groups can utilize our quantum operating system. We’re deploying the world’s first room-temperature diamond quantum computing system at Pawsey in Q1 2022 – we were meant to install it this month, but due to COVID delays we can’t actually cross the borders into Western Australia! We’re planning to deploy some in Germany as well, which is why we’re so lucky to have Mark coming on board to lead our operations in Europe and Germany.”

How do they perform compared to traditional superconducting quantum computers? Extremely well, says Mattingley-Scott. “There’s a figure of merit which you can apply to the ability of individual qubits to be useful, and that’s coherence time. Superconducting qubits typically hold their coherence for maybe 100, 150 microseconds. In room temperature diamonds, we’re talking about milliseconds. Like, a thousand times longer, and that means you can do a lot more. That’s part of the equation; the other part is error rates. Qubits, fundamentally, have an error rate, even before they lose coherence and descend into pure randomness. The error rates we get with nitrogen vacancy qubits are very, very good.”

So when will one of these things reach the storied milestone of quantum supremacy, becoming more powerful than any supercomputer at solving specific laboratory tests? In this case, that’s not the focus. “We have a clear five-year roadmap to produce something we call quantum utility,” says Luo. “Other systems can’t miniaturize, we can miniaturize. So for us it’s about producing a quantum computer or quantum accelerator that outperforms a classical computer of the same size, weight and power. It’s outperforming the components within a supercomputer rather than outperforming entire supercomputers, in order to provide commercial utility.” 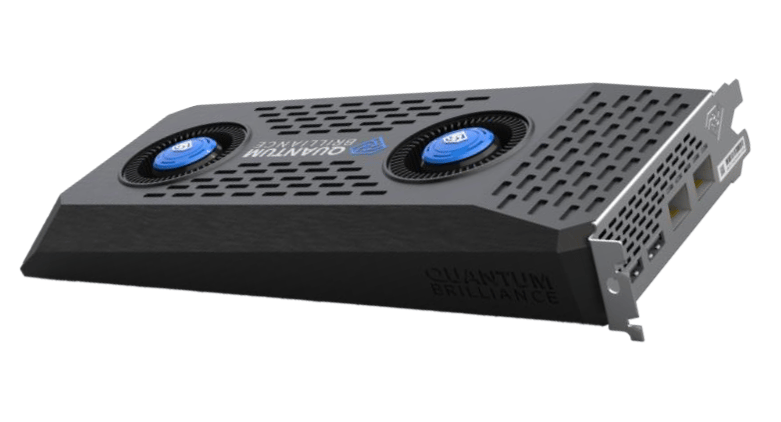 Room-temperature diamond Quantum Accelerators could become just another component for a PC, offering quantum capabilities when there’s an advantage

The Quantum Brilliance vision is to make qubits an easily-integrated extra string to any computer’s bow. Something like today’s high-end graphics cards, produced in mass quantities to work in a broad range of systems at low unit costs. Software developers can then use traditional computing where that’s advantageous and quantum only where it shines.

That could be in tasks that involve simulating pretty much anything with an atomic structure that exhibits quantum mechanical behavior; Mattingley-Scott lists pharmacological drug development, battery electrode development and energy generation as fields where this kind of gear could make an immediate impact. It could be in the linear algebra and matrix-style operations that underpin a lot of machine learning and AI – an explosively growing field in itself – and it could be highly useful in tasks that involve optimization, for example trying to reduce energy usage across the entire global business structure of a large logistics company.

“The potential business impact of quantum computing,” says Mattingley-Scott, “is that it’s going to fundamentally change almost everything we do, and the way we do it. I had a long, 32-year career at IBM, and for the last five of those I was running IBM’s Ambassador Program, essentially a pre-sales and tech sales channel for quantum computing. And I had my eye on what was happening with diamonds, because if you can strike out the requirement to cryogenically cool your computer, it completely reframes the value proposition. So I’ve had Quantum Brilliance on my radar for some time, there’s no other company working on a value proposition like this. And when the opportunity came along, that’s why I joined.”

“So with our five-year plan to get to that graphics card-sized Quantum Accelerator,” he continues, “there’s lots of uncertainties, and unknown variables. But we’re not waiting for any magical new technology. There are no gaps. We know how to get to that device, we just have to roll up our sleeves and do it. And industrialize things, and get the yields and capacities up and that good stuff. But that’s essentially the stuff the semiconductor industry has proven itself very good at, and we’ll be leveraging that. So I can’t give you exact dates, but that’s where we’re headed to, an industrialized type volume business.”