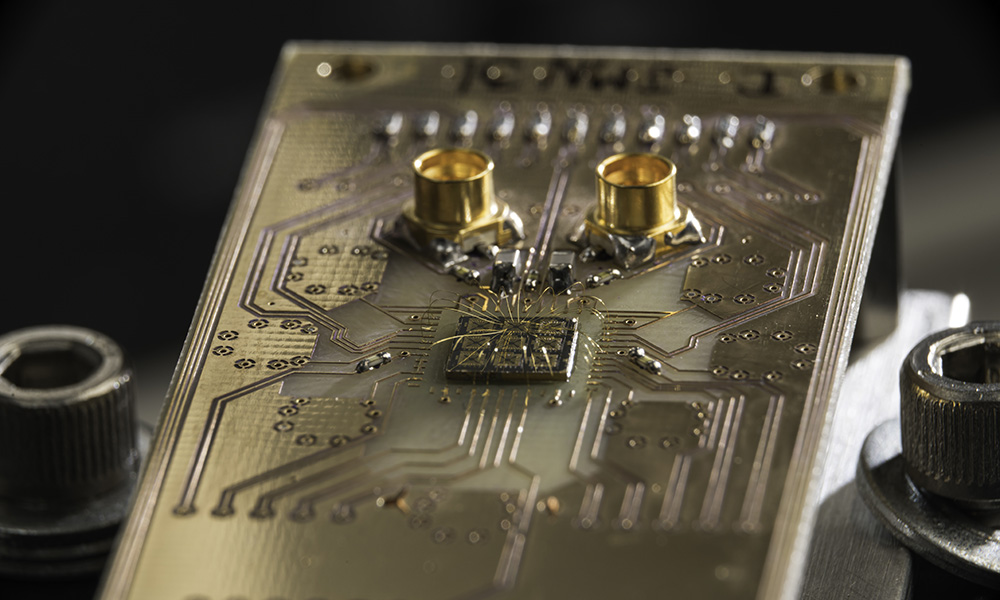 A quantum processor semiconductor chip is shown connected to a circuit board. (University of Rochester photo / J. Adam Fenster)

In a series of papers, Rochester researchers report major strides in improving the transfer of information in quantum systems.

Quantum science has the potential to revolutionize modern technology with more efficient computers, communication, and sensing devices. But challenges remain in achieving these technological goals, especially when it comes to effectively transferring information in quantum systems.

A regular computer consists of billions of transistors, called bits. Quantum computers, on the other hand, are based on quantum bits, also known as qubits, which can be made from a single electron.

Unlike ordinary transistors, which can be either “0” (off) or “1” (on), qubits can be both “0” and “1” at the same time. The ability of individual qubits to occupy these so-called superposition states, where they are in multiple states simultaneously, underlies the great potential of quantum computers. Just like ordinary computers, however, quantum computers need a way to transfer quantum information between distant qubits—and that presents a major experimental challenge.

In a series of papers published in Nature Communications, researchers at the University of Rochester, including John Nichol, an assistant professor of physics and astronomy, and graduate students Yadav Kandel and Haifeng Qiao, the lead authors of the papers, report major strides in enhancing quantum computing by improving the transfer of information between electrons in quantum systems.

In one paper, the researchers demonstrated a route of transferring information between qubits, called adiabatic quantum state transfer (AQT), for the first time with electron-spin qubits. Unlike most methods of transferring information between qubits, which rely on carefully tuned electric or magnetic-field pulses, AQT isn’t as affected by pulse errors and noise.

To envision how AQT works, imagine you are driving your car and want to park it. If you don’t hit your brakes at the proper time, the car won’t be where you want it, with potential negative consequences. In this sense, the control pulses—the gas and brake pedals—to the car must be tuned carefully. AQT is different in that it doesn’t really matter how long you press the pedals or how hard you press them: the car will always end up in the right spot. As a result, AQT has the potential to improve the transfer of information between qubits, which is essential for quantum networking and error correction.

The researchers demonstrated AQT’s effectiveness by exploiting entanglement—one of the basic concepts of quantum physics in which the properties of one particle affect the properties of another, even when the particles are separated by a large distance. The researchers were able to use AQT to transfer one electron’s quantum spin state across a chain of four electrons in semiconductor quantum dots—tiny, nanoscale semiconductors with remarkable properties. This is the longest chain over which a spin state has ever been transferred, tying the record set by the researchers in a previous Nature paper.

“Because AQT is robust against pulse errors and noise, and because of its major potential applications in quantum computing, this demonstration is a key milestone for quantum computing with spin qubits,” Nichol says.

Exploiting a strange state of matter

In a second paper, the researchers demonstrated another technique of transferring information between qubits, using an exotic state of matter called time crystals. A time crystal is a strange state of matter in which interactions between the particles that make up the crystal can stabilize oscillations of the system in time indefinitely. Imagine a clock that keeps ticking forever; the pendulum of the clock oscillates in time, much like the oscillating time crystal.

By implementing a series of electric-field pulses on electrons, the researchers were able to create a state similar to a time crystal. They found that they could then exploit this state to improve the transfer of an electron’s spin state in a chain of semiconductor quantum dots.

“Our work takes the first steps toward showing how strange and exotic states of matter, like time crystals, can potentially by used for quantum information processing applications, such as transferring information between qubits,” Nichol says. “We also theoretically show how this scenario can implement other single- and multi-qubit operations that could be used to improve the performance of quantum computers.”

Both AQT and time crystals, while different, could be used simultaneously with quantum computing systems to improve performance.

“These two results illustrate the strange and interesting ways that quantum physics allows for information to be sent from one place to another, which is one of the main challenges in constructing viable quantum computers and networks,” Nichol says.

Marion Technical College has wrapped up its month-long UpSkill-A-Thon competition. MTC collaborated with Microsoft Philanthropies to launch the … END_OF_DOCUMENT_TOKEN_TO_BE_REPLACED

Knox College is currently responding to a system disruption caused by ransomware. A statement provided Friday by Knox College Vice President of … END_OF_DOCUMENT_TOKEN_TO_BE_REPLACED