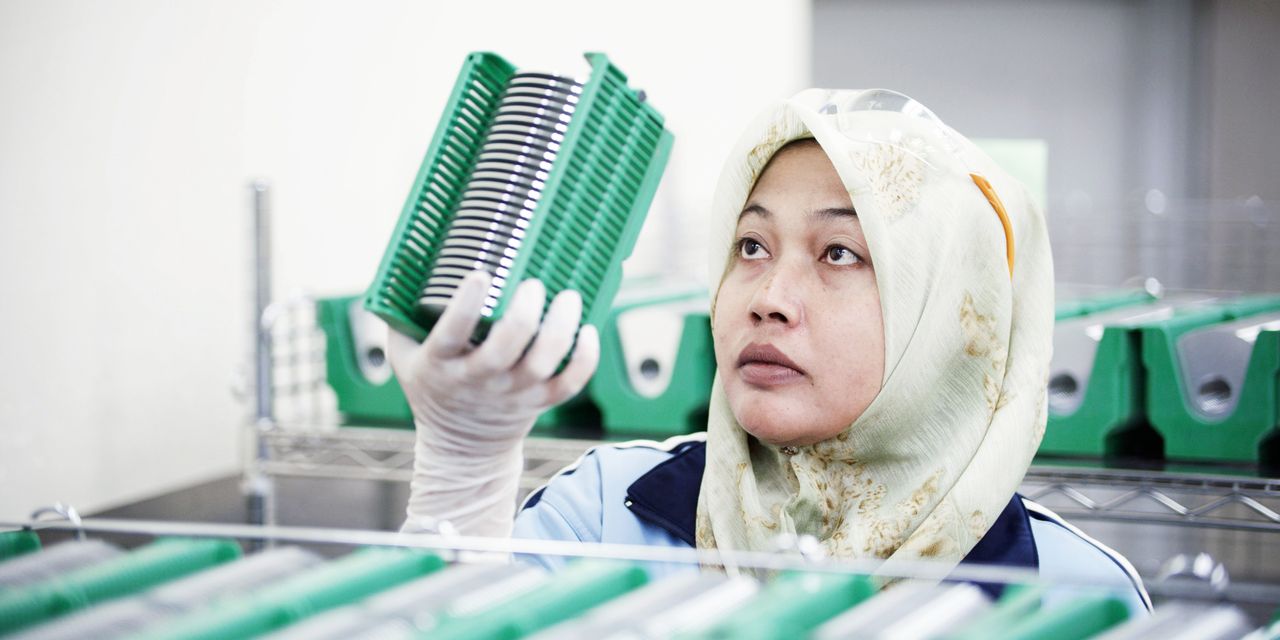 Not so long ago, every laptop came with a whirring drive. Not anymore. Hard disks have all but disappeared from consumer products.

has been making drives for more than four decades, and investors have been skeptical throughout. At various times, the business has been criticized as too competitive, commoditized, wildly cyclical, and obsolete. Those worries have made

one of the cheapest stocks in tech land, which still holds true today.

Seagate shares have rallied impressively this year, up 47% to a recent $91, but the stock still fetches just 14 times earnings estimates for the next 12 months.

The two American players, Seagate and Western Digital, have nearly 90% of the market. But Western has diversified, buying flash memory giant SanDisk in 2016, which makes Seagate the last hard-drive pure play.

It’s a good place to be. Seagate is thriving with new target markets and rapidly evolving technology. Its biggest market was once PCs and other consumer devices—the company built small drives for Apple iPod music players—but most PCs now ship with high-capacity solid-state drives. And while Seagate still sells some drives for external storage, gaming, and a few other consumer applications, it has refocused on a big opportunity: the cloud.

Today, more than 65% of Seagate’s capacity is targeted at mass capacity applications—like the cloud—with just a sliver of the rest still showing up in PCs. Seagate CFO Gianluca Romano says mass storage should generate 90% of revenue by 2025.

At a basic level, “clouds” are giant industrial buildings filled with servers, switches, solid-state storage, and disk drives—most of those drives are supplied by Seagate and Western Digital.

The cloud opportunity is driving a new phase of growth for Seagate. On the company’s recent earnings call, CEO Dave Mosley surprised investors by predicting revenue growth of at least 10% in calendar 2021, driven by a combination of growing cloud demand and stabilizing enterprise sales. That would mark Seagate’s first year of double-digit growth since 2012.

The strong growth of the public cloud players is providing a tailwind. In the first quarter, Microsoft Azure revenue rose 50%, Alphabet’s Google Cloud was up 46%, and

The growing need for mass storage is propelling demand for Seagate’s largest drives, which are likely to go from 18 terabytes today to 70 terabytes over the next few years, thanks to an emerging technology called HAMR, or heat-assisted magnetic recording, which uses lasers to briefly heat magnetic media, allowing for denser storage.

Meanwhile, CEO Mosley sees other new opportunities, as well. “There’s a bunch of edge data that’s not properly utilized; it’s actually deleted before it can be used,” he tells Barron’s. “In the language of artificial intelligence, the inference is gained, and the data is gone. In the future, you may want to keep the data around and have more and more powerful machines take a look.” He points to surveillance video as an example.

Morgan Stanley analyst Katy Huberty, who has an Overweight rating on Seagate shares, has a base-case target of $98 and a bull-case price of $119, 30% above recent levels. She sees fiscal 2022 profits growing by 43%, to $7.56 a share—well ahead of the Wall Street consensus of $6.69. The company’s fiscal year ends in June.

Seagate could even be a play on cryptocurrency, given the recent surge in demand for drives tied to Chia, a new cryptocurrency started by Bram Cohen, the creator of BitTorrent, a communications protocol that eased the sharing of large files.

Chia relies on storage, instead of processing power, to mine new currency. (Chia uses the term “farm,” rather than “mine.”)

Northland Capital Markets analyst Gus Richard says Chia farmers have triggered a spike in retail sales for high-capacity drives, doubling prices in some Asian markets. If that continues, drive supplies would tighten and prices would rise.

Seagate continues to generate strong free cash flow, and has an aggressive stock repurchase program to go along with a 3% dividend yield.

The current buyback authorization is $4.4 billion, 20% of Seagate’s market capitalization, and that’s after the company spent $1.75 billion on buybacks over the past two quarters. CFO Romano concedes the stock isn’t as cheap as it once was—it’s doubled since last summer—but he contends that the shares remain undervalued.

Based on its forward earnings multiple, Seagate is trading at a 50%-plus discount to the

index. And it fetches less than two times estimated sales, well below the seven times average for the cloud stocks in the

Seagate might now be the world’s cheapest bet on the cloud.

LANSING, Mich. (WLNS) — The Crime Stoppers of Mid-Michigan are staying busy this week, with four different cases that they need your help with. Two … END_OF_DOCUMENT_TOKEN_TO_BE_REPLACED