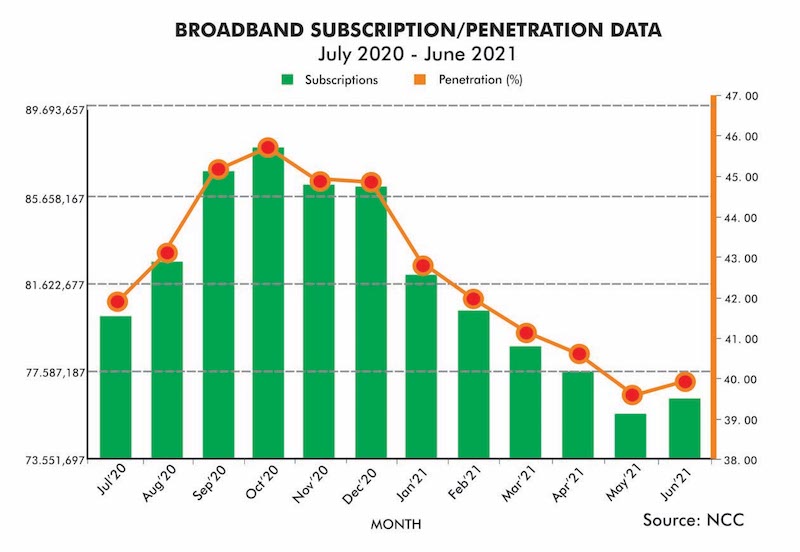 Analysts blame the decline on the suspension order on the sale and activation of new SIM cards in December 2020 by the Minister of Communications and Digital Economy, Dr. Isa Ibrahim Pantami.
The figures, which were obtained from NCC’s website, showed that in November 2020, the total number of active internet subscriptions was 154.8 million, but it slipped to 154.3 million in December 2020, with a further slip in January 2021 to 151.3 million.

The figures gave information on the number of active subscribers for data (internet) services on each of the licensed service providers utilizing the different technologies, such as GSM, Fixed Wired and VoIP.
Also, the statistics in the last eight months from October 2020 to May 2021, showed a slide in broadband subscriptions and penetration level.

Worried about the slide in internet and broadband subscriptions between December 2020 and May 2021, industry analysts blamed the slide on wrong policy implementation, which they said, affected the growth of the telecoms industry, within the period.

Chairman, Association of Licensed Telecoms Operators of Nigeria, Mr. Gbenga Adebayo, blamed it on the suspension order on the sale and activation of new SIM cards in December 2020 by the Minister of Communications and Digital Economy, Dr. Isa Ibrahim Pantami.

Statistics showed that the number of Nigerians with access to broadband (internet high-speed) services on their mobile devices as at Q1 2020, which stood at 87.6 million, reduced to 78.6 million by the end of March, 2021, which was attributed to policy implementation that rather set the telecoms sector backward. During the same period, basic active Internet subscriptions dropped also from 154.8 million to 144.9 million, according to the statistics obtained from NCC’s website.

The Nigerian Communications Commission, had in December 2020, announced the directive of the federal government to suspend further sales and activation of new SIM cards known as Subscriber Identification Module. The suspension was expected to last till the completion of the audit of the Subscriber Registration Database, which seeks to achieve global standards and quality in the issuance of SIM Cards.

Giving reasons for the suspension order, the federal government, in a statement released in December 2020 by NCC, said: “In line with the federal government desire to consolidate the achievement of the SIM Card registration exercise of September 2019, the Minister of Communications and Digital Economy, Dr. Isa Ibrahim Pantami, has directed the Nigerian Communications Commission (NCC) to embark on another audit of the Subscriber Registration Database again. The objective of the audit exercise is to verify and ensure compliance by Mobile Network Operators with the set quality standards and requirements of SIM Card Registration as issued by the Federal Ministry of Communications and Digital Economy and the Commission.

Accordingly, Mobile Netowork Operators are directed to immediately suspend the sale, registration and activation of new SIM Cards until the audit exercise is concluded, and government has conveyed the new direction.”
While Nigerians were still battling with the suspension order, Pantami, in the same December 2020, issued a fresh directive that made it compulsory for all SIM card registrations to be linked with National Identity Number (NIN), another directive that caused so much pains on telecoms subscribers.
Following the reactions from Nigerians, the suspension order was lifted in April 2021, after its policy implementation had caused setback for the telecoms industry, Adebayo said.

[ad_1] Superconducting quantum computers are huge and incredibly finicky machines at this point. They need to be isolated from anything that might … END_OF_DOCUMENT_TOKEN_TO_BE_REPLACED