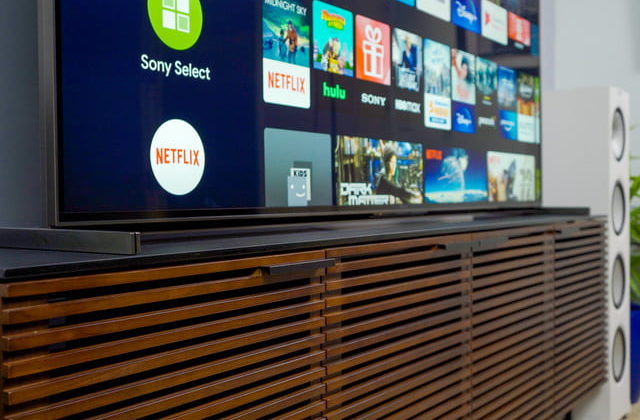 “The Sony Z8H is capable of absolutely stunning picture quality.”

Some might be hesitant to jump into an 8K television due to the current lack of 8K content — and the question of whether you can even see a difference between 8K and 4K. To investigate these concerns, we went big with a 75-inch Sony Z8H 8K HDR television, which we feel is the smallest-sized screen you’d want to go with for an 8K TV. And as we found out, you get more from an 8K television than just a big picture.

While we reviewed the 75-inch model, our review also applies to the 85-inch model.

Right out of the box, we noticed the very sturdy feet the Z8H comes with — which is good, since the TV itself is pretty heavy. The feet can be placed toward the middle of the TV or at the outer edges, although using the feet toward the edge requires a very wide media stand. Handling a TV this large and getting those feet screwed in will take more than one person, so keep that in mind.

The Z8H is a bold but attractive television made of quality materials.

The box is also packed with six decorative panels to place on the back for cable management, a brushed aluminum remote, and a printed setup guide. Usually, the setup guide is something we toss to the side, but in the ZH8’s case, we ended up needing to fish it back out. For some help understanding how to set up the TV, be sure to check out our unboxing video.

The Z8H is a bold but attractive television made of quality materials. Metal borders, slim bezels, and sturdy feet add to a premium feel. That metal border isn’t just for looks, either. It acts as a tweeter to enhance sound effects and broaden the soundstage, making the TV sound as big as it looks.

The back of the Z8H comes with four HDMI inputs, one toward the side, two toward the bottom, and one near the back center. The HDMI port near the back center is the notable one, as it’s the only HDMI port that supports 8K at 60 Hz, or 4K at 120 Hz. The port is located next to two speaker terminals that allow you to use the Z8H’s speakers as the center channel for a surround sound system.

Once the Z8H is up and running, be sure to manually force a software update. The Android operating system will make you think that everything is updated, but in reality, it requires downloading the updates yourself, so be sure to check for the firmware update section in the settings menu.

With a TV this large, you want a sound that is equally big — and the Z8H absolutely delivers. As we mentioned before, there is an option to make the TV the center channel for your surround sound system. But if you’re not planning on a surround sound hookup, the Z8H still delivers a premium experience — it has big, full, rich sound from the built-in speakers, and utilizes the frame as a tweeter so the sounds seem to be coming from many different places, both inside and outside the confines of the TV.

Another aspect that makes the Z8H a premium experience is the built-in ATSC 3.0 tuner, which is the new over-the-air broadcast standard. The promise of ATSC 3.0 is the potential for 4K to be delivered over the air, but what we’ve found in our market in Portland, Oregon, is that broadcasters are simply using enhanced bandwidth to deliver more channels with slightly better picture quality.

If we had to pick one word to describe the Z8H’s picture quality, it would be striking.

If we had to pick one word to describe the Z8H’s picture quality, it would be striking. There’s intense brightness to the HDR highlights, and it maintains very good black levels and mitigates blooming to a great degree. In our test of bright images on pure black backgrounds, the backgrounds were a deep, inky black, while the bright objects stayed extremely bright.

The Z8H has 2,500 nits of brightness for peak HDR highlights, and as we found out through our picture quality tests, it produces the contrast that really brings HDR home. It also handles color range very well. Straight out of the box, the Z8H’s color is spot-on, with almost no adjustments. There’s always a chance of colors beginning to wash out when pushed into the higher brightness range of HDR, but the Z8H absolutely does not do that. You get a vibrancy, along with a deep richness of full-color saturation.

In true Sony style, movies at 24 frames per second look super-smooth, with almost no judder at all. And while the Z8H had a bit of a tough time during some pretty intensive test patterns, turning the Motion Flow to “auto” really smooths those tough spots out. The Motion Flow option might add a little bit of the “Soap Opera Effect” to movies, but on the Z8H, it’s perfectly fine for almost all other types of content — and it makes a big difference in smoothing out fast motion, particularly for sports.

The Z8H does have some struggles, though. In tests we ran, it showed a “shimmer” effect in highly detailed areas on some images as they moved. We also noticed some slight moirè effect in tight grid patterns, such as those on high-rise buildings in New York. While we can’t be 100% sure, we think this issue arises from trying to upscale complex, highly detailed 4K images to 8K in real time.

Gaming is a blast on the Z8H, and you can get 4K 60Hz with HDR reliably. There was a bit of an issue plugging into the 8K/4K 120 Hz HDMI port, as the PlayStation 5 we were using didn’t want to turn on HDR until we lowered the resolution down to 1080p. We’ve reached out to Sony to see if that issue could be rectified and, as promised at the time, the company issued a firmware update to fix that problem. Playing high-resolution games on a TV this big and with this kind of HDR punch is not only fun, it’s absolutely beautiful.

Perhaps you’ve noticed that we had very little to say about 8K resolution, and there’s a reason for that: You don’t necessarily buy an 8K set just for its resolution, but to have all the premium features you want. Premium design, premium sound, premium tuner, premium picture quality, premium gaming experience — if you want the best Sony has to offer, you need to buy one of its 8K TVs to get it. And Sony isn’t alone. Other manufacturers are doing the same thing. But remember: It’s the whole package; not just the resolution. Where the Z8H shines is in its premium performance at every turn. Sure, you have to buy an 8K TV to get it, but the Z8H is a wonderful TV, and absolutely worth the price for those who value premium performance.

Is there a better alternative?

We wouldn’t say there’s a better alternative, just alternatives. As the Z8H is one of the finest LED/LCD TVs you can buy, you’d have to look to the Samsung Q900TS as a competitor, which comes in about $500 less expensive at the moment.

How long will it last?

Given its 8K resolution, premium processing, and ATSC 3.0 tuner, the Z8H is set up to uphold its premium performance well into the future.

Sony offers a one-year limited warranty for the Z8H. You can find that full warranty here.

Should you buy it?

Yes. If you’ve got the means, the Z8H is a remarkable TV with outstanding performance — and it just happens to be an 8K model. We wouldn’t buy this TV for its resolution necessarily, but most certainly for its ultra-premium performance.

After ‘The Voice’ and BET, two Mississippians give one last concert before heading to L.A. Published 6:45 am Monday, January 30, 2023 … END_OF_DOCUMENT_TOKEN_TO_BE_REPLACED