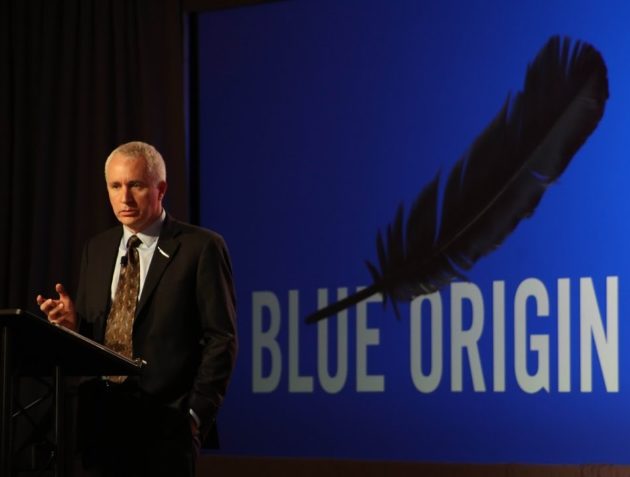 What will commercial space stations be good for? The application that typically comes up would be their use as space hotels, or maybe zero-gravity research labs and factories.

But space industry veteran Rob Meyerson has a different idea in mind — and in his role as operating partner at C5 Capital USA, he’s able to put some money behind it.

“Looking for new markets is something we’re highly motivated to do,” Meyerson told GeekWire. “Data storage and compute is one market. Cybersecurity is another.”

The possibilities for providing data and security services on the final frontier played a big role in C5 Capital’s decision to lead a $130 million funding round for Texas-based Axiom Space, which is due to send citizen astronauts to the International Space Station next year and could start laying the groundwork for its own space station in 2024.

“We have a lot of data that’s created in space, but how valuable would it be to actually do compute and storage in space?” Meyerson asked. “We’ve been talking with Axiom about that and helping them to form partnerships. How do we use the C5 portfolio in cybersecurity and threat protection to assist Axiom with their supply chain and their partners, to bring the most advanced technologies to that critically important area?”

In connection with the funding deal, Meyerson has joined Axiom Space’s board of directors. It’s the latest big move for Meyerson, who lives in Tacoma, Wash., and served as the president of Amazon CEO Jeff Bezos’ Blue Origin space venture from 2003 to 2017.

Blue Origin’s Rob Meyerson speaks at the 2016 International Symposium on Personal and Commercial Spaceflight in New Mexico. (ISPCS via YouTube)

Meyerson’s experience in the space industry goes even further back than Blue Origin, taking in a six-year stint as senior program manager for Kistler Aerospace’s K-1 reusable launch vehicle (which never got off the ground) and 12 years as an aerospace engineer at NASA’s Johnson Space Center.

But it’s only been in the past few years that people have been talking seriously about creating privately owned outposts in Earth orbit. Space tourism and in-space manufacturing no longer seem as far out as they once did, and Meyerson believes Axiom Space is well-placed to capitalize on the possibilities.

“This is the kind of opportunity that we wouldn’t have been betting on to come if we had done this in 2019,” he said. “But in 2020, it was perfectly aligned, and we said, ‘OK, well, here are all these services, and let’s invest in the destination.’ There’s only one company out there that has this exclusive contract with NASA to access the node on the ISS, and that’s Axiom Space.”

That doesn’t mean Axiom Space will have the space station market all to itself. Other companies — including Sierra Nevada Corp., Bigelow Aerospace, Nanoracks and Meyerson’s old teammates at Blue Origin — also have plans on the drawing boards.

At the same time, heavyweights ranging from Amazon and Microsoft to Lockheed Martin are looking into ways to extend cloud computing to the space frontier. Satellite constellations such as SpaceX’s Starlink and Amazon’s yet-to-be-launched Project Kuiper could play a big role in those efforts.

What’s so attractive about moving data processing off the planet?

“Most importantly, there is a lot of data that is generated in space,” Meyerson explained. “We can envision a number of use cases where that data is generated in space, transmitted back to Earth in one part of the world, and there are compute operations done on that data to process it and turn it into actionable data, and then it is transmitted to another part of the world to have action taken on it.”

“We believe that doing those computer operations in space is going to reduce the decision timeline by fractions of a second, if not seconds,” Meyerson said.

So does that mean Axiom Space will be going up against Amazon Web Services and Microsoft Azure? Not at all, Meyerson said.

“They can definitely draw upon Axiom Space,” he said. “We have great relationships with those companies, and all of the cloud providers and service providers that work on top of the cloud. I think they’re very obvious choices for partners.”

Speaking of partners, the perils of the past year have only confirmed Meyerson’s view that space ventures mesh well with the rest of C5 Capital’s investment portfolio, which is heavy with companies that focus on big data and cybersecurity.

“The digital transformation of everything we do has been so accelerated during the pandemic,” he noted. “And it’s making us more and more vulnerable. So the combination of two things — becoming more reliant on space for critical infrastructure, and the digital transformation leading to more vulnerability — just makes our investments in cybersecurity more important. And we think the natural application is in space.”

Energy, information technology, infrastructure and space are some of the key fields of cooperation between China and Saudi Arabia that will yield huge … END_OF_DOCUMENT_TOKEN_TO_BE_REPLACED

The Pentagon has split a $9bn contract for cloud computing services among Google, Oracle, Amazon and Microsoft, one year after scrapping a previous … END_OF_DOCUMENT_TOKEN_TO_BE_REPLACED

(TNS) — Among all colleges and universities in Tennessee, only 45 percent of students who enter college ultimately get either an associate's degree … END_OF_DOCUMENT_TOKEN_TO_BE_REPLACED