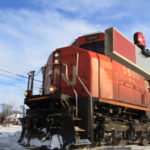 The railroad barons are at it again.Canadian National Railway on Tuesday offered to buy Kansas City Southern for $33.7 billion, topping a $29 billion bid put forward last month by a rival railroad operator, Canadian Pacific.The competing offers underline the riches expected to come from trade flows after the United States-Mexico-Canada Agreement was passed into law last year. A … END_OF_DOCUMENT_TOKEN_TO_BE_REPLACED

More than half of the digital data firms generate is collected, processed and stored for single-use purposes. Often, it is never re-used. This could … END_OF_DOCUMENT_TOKEN_TO_BE_REPLACED