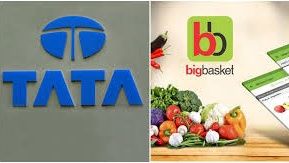 The Tata Group is in the final stages of acquiring a majority stake of 68% in Supermarket Grocery Supplies, which runs and operates online grocery brand BigBasket. The deal is said to be worth about Rs 9,300-9,500 crore.

The Tata Group has sent the deal to the antitrust watchdog, the Competition Commission of India (CCI), and a formal approval is expected to come in a month’s time.

Chinese internet giant Alibaba, which has nearly 30% stake in BigBasket, and other investors like Abraaj Group are set to exit as part of the deal with Tata Group.

Tata group and BigBasket have so far not officially commented on the matter.

It is expected that the top management of BigBasket will continue with their current postings in the company.

The Bangalore-based Big Basket has presence in 26 Indian cities. It is the leader in the online grocery space with over 18,000 products and 1,000 brands available on its platform.

Its business zoomed up in the pandemic-induced lockdown situation, and its new customers base shot up by a whopping 84% last year.

But why are Tatas taking over BigBasket?

Tatas entering the online grocery business would cause further tizzy in a market dominated by the biggies, Amazon, Reliance Retail (Jio Mart) and the Walmart-owned Flipkart.

The acquisition of BigBasket is in line with the Tata Group’s plans for a major foray in the online segment — a lacuna in an otherwise dominant player that operates, as the cliché goes, from salt to software in India.

The Tata Group is planning to launch a multi-utility app later this year.

The app would bring together multiple consumer services owned by the group including the brick-and-mortar Croma Retail stores, a multi-brand option for all consumer electronics products in India.

For the Tata group, the deal is aimed at securing as much control as possible in India’s fast-growing e-commerce market before RIL and Flipkart become too big”.

Further, the expansion of Reliance Retail and JioMart in e-commerce last year may have prompted Tata Group to accelerate its digital efforts.

But Tatas should be ready for the long haul as it competitors Amazon, Flipkart and Reliance are no pushovers.

The competition, on the other hand, should be ready for some serious fight in the market as Tatas are known for their persistence.

This post was contributed by a community member. The views expressed here are the author's own.Are you interested in a career in the growing field of … END_OF_DOCUMENT_TOKEN_TO_BE_REPLACED

After ‘The Voice’ and BET, two Mississippians give one last concert before heading to L.A. Published 6:45 am Monday, January 30, 2023 … END_OF_DOCUMENT_TOKEN_TO_BE_REPLACED