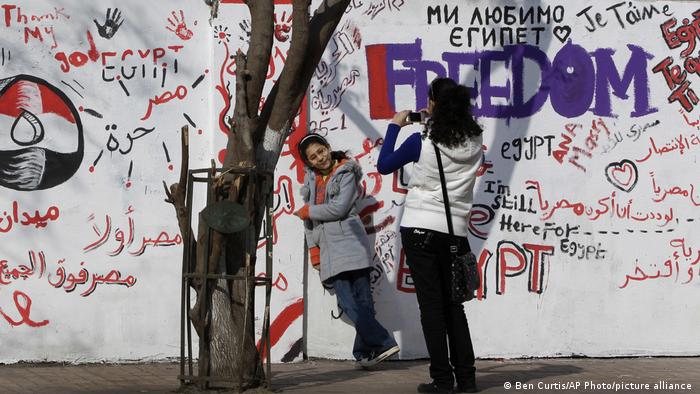 In recent years, Egypt has become a thriving place for digital technology — as well as the Middle East’s No. 1 internet censor.

“Communications and technology are the fastest-growing sectors of the Egyptian economy, with recent growth averaging about 16%,” David Butter, analyst at the London-based think tank Chatham House, told DW.

However, he said, there is an obvious contradiction between Egypt’s “rapid development of the digital economy, such as the taxation system, fintech and health care, and the general policy of the state seeking to control all forms of discourse, with heavy-handed, often brutal, behavior from the security authorities and the judiciary.”

The latest example of this contradiction is the sentencing of the social media influencers Mawada Eladhm, 23, and Haneen Hossam, 20, to six and 10 years, respectively, in prison on charges of “human trafficking,” in addition to fines of 300,000 Egyptian pounds (€16,000/$19,000). Three male employees of video-sharing app Likee— Abdel Hamid, Mohamed Alaa Eddin and Ahmed Salah Attiya — were also sentenced to six years in prison each for helping Eladhm and Hossam.

Together, Eladhm and Hossam have more than 4 million followers across Instagram, Twitter and TikTok. The government had monitored their video clips, even though the content was nonpolitical.

Egypt’s Anti-Cyber and Information Technology Crimes Law was ratified by President Abdel Fattah el-Sissi on August 18, 2018, and has given the authorities wide-reaching powers to punish “anyone who violates the values and principles of the family in the Egyptian society,” states the Washington-based Tahrir Institute for Middle East Policy.

The law is officially aimed at fighting extremist and terrorist organizations that use the internet to promote their ideas to youths. It also bans the online dissemination of information on army and police movement and criminalizes hacking into information systems. Its Article 7 grants the investigative authorities the power to block any website whenever they deem that the website’s content promotes extremist ideas that violate national security or damages the Egyptian economy.

The Internet and Communication Technologies vision released by the Communications and Information Technology Ministry aims to transform Egypt into the Middle East’s largest digital society by 2050. The second-largest market, which is also known for its harsh conviction of dissidents and online activists who are not in line with the government, is Saudi Arabia.

According to the Egyptian media organization Mada, which reports in English and Arabic, the situation for bloggers and social media influencers has become worse since the beginning of a security campaign against female content creators on TikTok and Likee. At least 10 women have been convicted since last September.

Hossam and Eladhm were initially found guilty of “violating family principles and values in Egyptian society” under Articles 22, 25 and 27 of the cybercrime law in September, but after a successful appeal, the case was transferred to Cairo’s Criminal Court and the charge of human trafficking was added for both influencers.

In a clip, Eladhm had encouraged women to sign up for the video platform Likee and monetize their video clips through engaging in communication with users. According to prosecutors, that constituted “using girls in acts contrary to the principles and values of Egyptian society with the aim of gaining material benefits.”

The harsh sentencing has sparked outcry from rights organizations. In a statement issued Tuesday, nine Egyptian NGOs publicly condemned the sentences. The organizations called for the government to “stop imposing its ill-defined perceptions of family values on citizens, to stop monitoring social media sites, and to stop punishing social media users with imprisonment.”

Tarek Radwan, the head of the Human Rights Committee in the House of Representatives, has accused the organizations of the “politicization” of Hossam and Eladhm’s case, and condemned “voices that use human rights” to criticize the Egyptian judiciary’s handling of the women’s trial.

Hossam, who had tried to escape security forces but was caught, broadcast an emotional Instagram live session before she was arrested. She addressed el-Sissi, asked for help and condemned the “unfair” handling of her case. The video has been watched almost 3.5 million times.

Her appeal and the international coverage of the case have not brought about a change. Similarly, calls by the families have remained unanswered and given the fact that the cybercrime law is in line with el-Sissi’s governance, it’s unlikely he will intervene.

“It’s egregious that women who are monetizing social media as influencers, an activity that takes place quite regularly and on a daily basis around the world, are being sentenced to six to 10 years in prison on human trafficking charges,” Mai El-Sadany, managing director of the Tahrir Institute for Middle East Policy, told DW. “There are serious cases of human trafficking that do take place in Egypt, and this is not it.”

[ad_1] Superconducting quantum computers are huge and incredibly finicky machines at this point. They need to be isolated from anything that might … END_OF_DOCUMENT_TOKEN_TO_BE_REPLACED