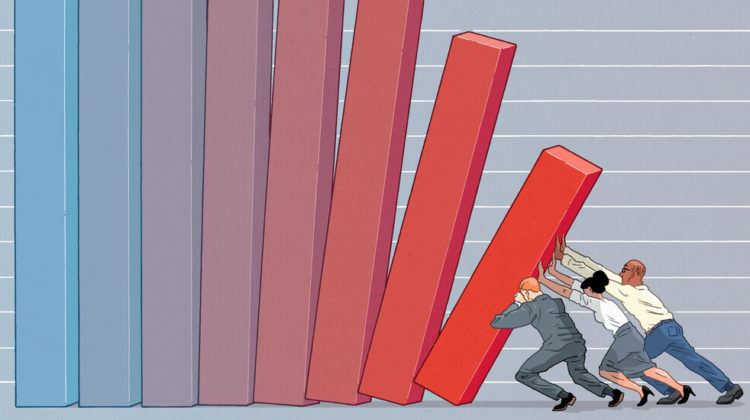 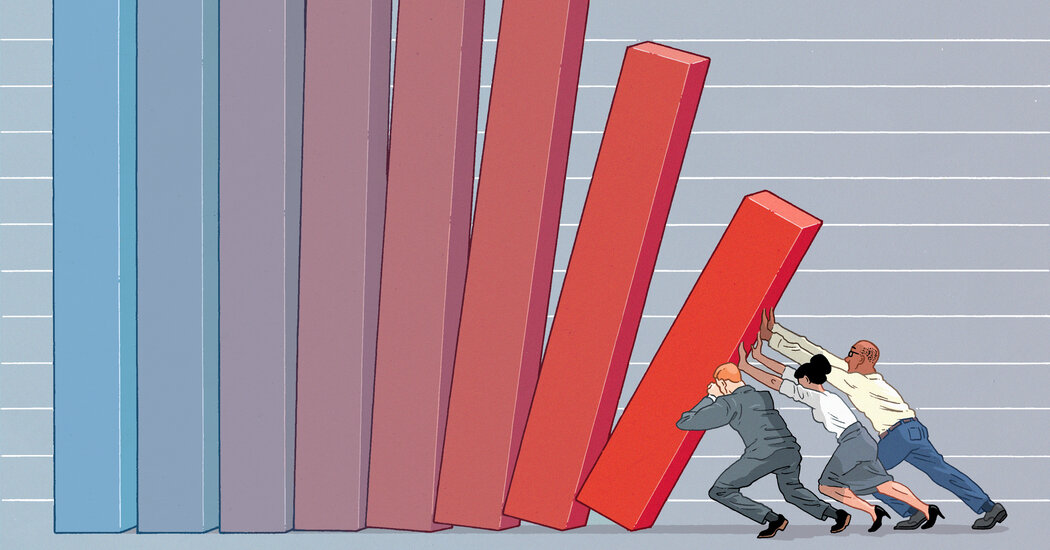 By the middle of March 2020 a sense of anxiety pervaded the Federal Reserve. The fast-unfolding coronavirus pandemic was rippling through global markets in dangerous ways.

Trading in Treasurys — the government securities that are considered among the safest assets in the world, and the bedrock of the entire bond market — had become disjointed as panicked investors tried to sell everything they owned to raise cash. Buyers were scarce. The Treasury market had never broken down so badly, even in the depths of the 2008 financial crisis.

The Fed called an emergency meeting on March 15, a Sunday. Lorie Logan, who oversees the Federal Reserve Bank of New York’s asset portfolio, summarized the brewing crisis. She and her colleagues dialed into a conference from the fortresslike New York Fed headquarters, unable to travel to Washington given the meeting’s impromptu nature and the spreading virus. Regional bank presidents assembled across America stared back from the monitor. Washington-based governors were arrayed in a socially distanced ring around the Fed Board’s mahogany table.

Ms. Logan delivered a blunt assessment: While the Fed had been buying government-backed bonds the week before to soothe the volatile Treasury market, market contacts said it hadn’t been enough. To fix things, the Fed might need to buy much more. And fast.

Fed officials are an argumentative bunch, and they fiercely debated the other issue before them that day, whether to cut interest rates to near-zero.

But, in a testament to the gravity of the breakdown in the government bond market, there was no dissent about whether the central bank needed to stem what was happening by stepping in as a buyer. That afternoon, the Fed announced an enormous purchase program, promising to make $500 billion in government bond purchases and to buy $200 billion in mortgage-backed debt.

It wasn’t the central bank’s first effort to stop the unfolding disaster, nor would it be the last. But it was a clear signal that the 2020 meltdown echoed the 2008 crisis in seriousness and complexity. Where the housing crisis and ensuing crash took years to unfold, the coronavirus panic had struck in weeks.

As March wore on, each hour incubating a new calamity, policymakers were forced to cross boundaries, break precedents and make new uses of the U.S. government’s vast powers to save domestic markets, keep cash flowing abroad and prevent a full-blown financial crisis from compounding a public health tragedy.

The rescue worked, so it is easy to forget the peril America’s investors and businesses faced a year ago. But the systemwide weaknesses that were exposed last March remain, and are now under the microscope of Washington policymakers.

At first, the sell-off in risky investments was normal — a rational “flight to safety” while the global economic outlook was rapidly darkening. Stocks plummeted, demand for many corporate bonds disappeared, and people poured into super-secure investments, like U.S. Treasury bonds.

On March 3, as market jitters intensified, the Fed cut interest rates to about 1 percent — its first emergency move since the 2008 financial crisis. Some analysts chided the Fed for overreacting, and others asked an obvious question: What could the Fed realistically do in the face of a public health threat?

“We do recognize that a rate cut will not reduce the rate of infection, it won’t fix a broken supply chain,” Chair Jerome H. Powell said at a news conference, explaining that the Fed was doing what it could to keep credit cheap and available.

But the health disaster was quickly metastasizing into a market crisis.

Lockdowns in Italy deepened during the second week of March, and oil prices plummeted as a price war raged, sending tremors across stock, currency and commodity markets. Then, something weird started to happen: Instead of snapping up Treasury bonds, arguably the world’s safest investment, investors began trying to sell them.

The yield on 10-year Treasury debt — which usually drops when investors seek safe harbor — started to rise on March 10, suggesting investors didn’t want safe assets. They wanted cold, hard cash, and they were trying to sell anything and everything to get it.

Religion works through churches. Democracy through congresses and parliaments. Capitalism is an idea made real through a series of relationships between debtors and creditors, risk and reward. And by last March 11, those equations were no longer adding up.

That was the day the World Health Organization officially declared the virus outbreak a pandemic, and the morning on which it was becoming clear that a sell-off had spiraled into a panic.

The Fed began to roll out measure after measure in a bid to soothe conditions, first offering huge temporary infusions of cash to banks, then accelerating plans to buy Treasury bonds as that market swung out of whack.

But by Friday, March 13, government bond markets were just one of many problems.

Investors had been pulling their cash from prime money market mutual funds, where they park it to earn a slightly higher return, for days. But those outflows began to accelerate, prompting the funds themselves to pull back sharply from short-term corporate debt markets as they raced to return money to investors. Banks that serve as market conduits were less willing than usual to buy and hold new securities, even just temporarily. That made it harder to sell everything, be it a company bond or Treasury debt.

The Fed’s announcement after its March 15 emergency meeting — that it would slash rates and buy bonds in the most critical markets — was an attempt to get things under control.

But Mr. Powell worried that the fix would fall short as short- and long-term debt of all kinds became hard to sell. He approached Andreas Lehnert, director of the Fed’s financial stability division, in the Washington boardroom after the meeting and asked him to prepare emergency lending programs, which the central bank had used in 2008 to serve as a support system to unraveling markets.

Mr. Lehnert went straight to a musty office, where he communicated with Fed technicians, economists and lawyers via instant messenger and video chats — in-person meetings were already restricted — and worked late into the night to get the paperwork ready.

Starting that Tuesday morning, after another day of market carnage, the central bank began to unveil the steady drip of rescue programs Mr. Lehnert and his colleagues had been working on: one to buy up short-term corporate debt and another to keep funding flowing to key banks. Shortly before midnight on Wednesday, March 18, the Fed announced a program to rescue embattled money market funds by offering to effectively take hard-to-sell securities off their hands.

But by the end of that week, everything was a mess. Foreign central banks and corporations were offloading U.S. debt, partly to raise dollars companies needed to pay interest and other bills; hedge funds were nixing a highly leveraged trade that had broken down as the market went haywire, dumping Treasurys into the choked market. Corporate bond and commercial real estate debt markets looked dicey as companies faced credit rating downgrades and as hotels and malls saw business prospects tank.

The world’s most powerful central bank was throwing solutions at the markets as rapidly as it could, and it wasn’t enough.

How They Fixed It

The next weekend, March 21 and 22, was a frenzy. Officials dialed into calls from home, completing still-secret program outlines and negotiating with Treasury Secretary Steven Mnuchin’s team to establish a layer of insurance to protect the efforts against credit losses. After a tormented 48-hour hustle, the Fed sent out a mammoth news release on Monday morning.

Headlines hit newswires at 8 a.m., well before American markets opened. The Fed promised to buy an unlimited amount of Treasury debt and to purchase commercial mortgage-backed securities — efforts to save the most central markets.

The announcement also pushed the central bank into uncharted territory. The Fed was established in 1913 to serve as a lender of last resort to troubled banks. On March 23, it pledged to funnel help far beyond that financial core. The Fed said it would buy corporate debt and help to get loans to midsize businesses for the first time ever.

It finally worked. The dash for cash turned around starting that day.

The March 23 efforts took an approach that Mr. Lehnert referred to internally as “covering the waterfront.” Fed economists had discerned which capital markets were tied to huge numbers of jobs and made sure that every one of them had a Fed support program.

On April 9, officials put final pieces of the strategy into play. Backed by a huge pot of insurance money from a rescue package just passed by Congress — lawmakers had handed the Treasury up to $454 billion — they announced that they would expand already-announced efforts and set up another to help funnel credit to states and big cities.

The Fed’s 2008 rescue effort had been widely criticized as a bank bailout. The 2020 redux was to rescue everything.

The Fed, along with the Treasury, most likely saved the nation from a crippling financial crisis that would have made it harder for businesses to survive, rebound and rehire, intensifying the economic damage the coronavirus went on to inflict. Many of the programs have since ended or are scheduled to do so, and markets are functioning fine.

But there’s no guarantee that the calm will prove permanent.

“The financial system remains vulnerable” to a repeat of last March’s sweeping disaster as “the underlying structures and mechanisms that gave rise to the turmoil are still in place,” the Financial Stability Board, a global oversight body, wrote in a meltdown post-mortem.

The question policymakers and lawmakers are now grappling with is how to fix those vulnerabilities, which could portend problems for the Treasury market and money market funds if investors get seriously spooked again.

The Fed’s rescue ramps up the urgency to safeguard the system. Central bankers set a precedent by saving previously untouched markets, raising the possibility that investors will take risks, assuming the central bank will always step in if things get bad enough.

There’s some bipartisan appetite for reform: Trump-era regulators began a review of money markets, and Treasury Secretary Janet L. Yellen has said she will focus on financial oversight. But change won’t be easy. Protests in the street helped to galvanize financial reform after 2008. There is little popular outrage over the March 2020 meltdown, both because it was set off by a health crisis — not bad banker behavior — and because it was resolved quickly.

Industry players are already mobilizing a lobbying effort, and they may find allies in resisting regulation, including among lawmakers.

“I would point out that money market funds have been remarkably stable and successful,” Senator Patrick J. Toomey, Republican of Pennsylvania, said during a Jan. 19 hearing.

Energy, information technology, infrastructure and space are some of the key fields of cooperation between China and Saudi Arabia that will yield huge … END_OF_DOCUMENT_TOKEN_TO_BE_REPLACED

The Pentagon has split a $9bn contract for cloud computing services among Google, Oracle, Amazon and Microsoft, one year after scrapping a previous … END_OF_DOCUMENT_TOKEN_TO_BE_REPLACED

(TNS) — Among all colleges and universities in Tennessee, only 45 percent of students who enter college ultimately get either an associate's degree … END_OF_DOCUMENT_TOKEN_TO_BE_REPLACED