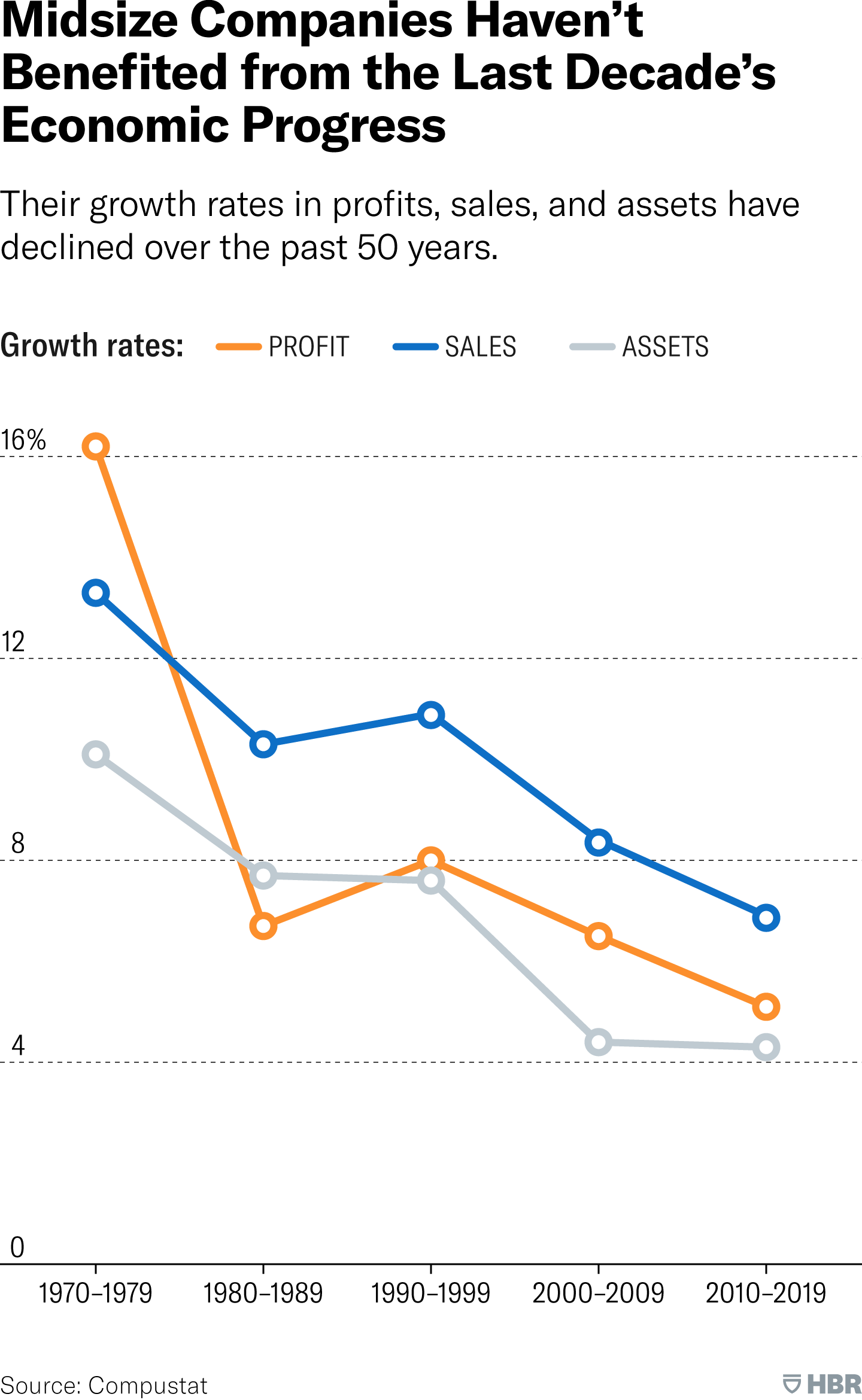 Despite low interest rates and a generally stable economic environment, 2010–2019 saw the slowest growth among midsize companies and a continual deterioration of their financial performance. That may have to do with the last decade’s winner-takes-all economy. Bankruptcy filings shows that the pandemic made this trend even worse. It’s never been more important for midsize businesses to understand that a booming stock market is not an accurate reflection of the reality for most American corporations.

When the Covid-19 pandemic hit, a record number of companies, many of which had survived for more than 50 or even 100 years, had no other option but to file for bankruptcy. Recent trends don’t bode well for midsize companies that are the bedrock of any nation’s economy.

We used a database approach to show the current plight of midsize companies and examined the recent period of 2000 to 2019, culminating in the pandemic year 2020. We defined midsize companies as those in the middle 40% of all companies listed on the U.S. stock exchanges by market value and identified them on an annual basis based on their market value at the end of previous fiscal year. (The top 30% and the bottom 30% are classified as big and small, respectively.)

To show the slowing growth trend, we calculated year-on-year percent-growth rates of three financial indicators — sales, assets, and profits — for each midsize company. Sales is the top-line number in income statements and indicates the market size for the company’s products and services. Sales growth indicates whether the company’s business is growing or diminishing. Asset growth shows whether the company is increasing or decreasing its total resource deployment. Profits is the bottom-line number in income statements and shows whether the company is generating a net surplus in its operations. That surplus is used to finance further growth and pay dividends to shareholders.

The figure shows that the growth rate in each of the three measures has declined over the past 50 years and was lowest during the decade 2010–2019, despite that period’s having been labeled as a decade of economic recovery. This last decade showed rising population, decreasing interest rates, growth in the hourly wage rate and household income, improving education attainment, and growing GDP. You would expect those factors to have enabled rapid growth for corporations, yet such growth seems to have bypassed midsize companies.

It’s difficult to pinpoint the exact reason why midsize companies haven’t benefited from the past decade’s economic progress, but we offer a few hypotheses. One plausible reason is that businesses that could scale their virtual operations without the need for physical assets benefitted most from the technological progress and economic conditions. As a result, digital disruptors like Amazon, Airbnb, and Uber ate into the growth and margins of midsize companies’ business. Amazon needed large infrastructure, but it could integrate across physical and virtual platforms seamlessly, disrupting many businesses simultaneously. In contrast, midsize companies, particularly those like hotel chains and retail stores that operate with physical assets and infrastructure, lacked not only the dynamism of small companies but also the R&D investment and scaling capabilities of large companies. Furthermore, the last decade was a winner takes-all-economy, with large companies like Amazon and Apple getting even bigger. We previously showed that the economic benefits that came about since the financial crisis of 2008 largely accrued to large companies.

In 2019, we described the changes in market values of midsize companies. The new statistics we present in this article highlight midsize businesses’ struggles in the past decade. During the 2010–2019 period, 39.8% of midsize companies reported a loss, 33% reported year-on-year decreases in sales, and 47% reported declines in annual profit. After removing the influence of outliers, the average earnings-to-price ratio was negative 3.86%. The average return on assets was also negative at 2.36%. The median change in return on equity, a measure of profitability on shareholder value, was negative 4.04%. These results indicate that midsize companies increasingly struggled in the last decade despite the stable and growth-conducive economic conditions.

What happened from 2010–2019 didn’t portend well when the pandemic hit in 2020. We don’t yet have financial reports for the fiscal year 2020 because it typically takes three months to prepare and audit the financial statements before they’re reported. However, we do have another indicator of financial distress: the number of bankruptcies filed by midsize companies. For this information, we rely on the UCLA-LoPucki Bankruptcy Research Database, which tracks bankruptcies filed by companies with assets exceeding $100 million in 1980 dollars (about $310 million in today’s dollars). The database also includes economically important midsize companies. The following figure shows a trend in the number of midsize companies that filed for bankruptcy from 2010–2020. 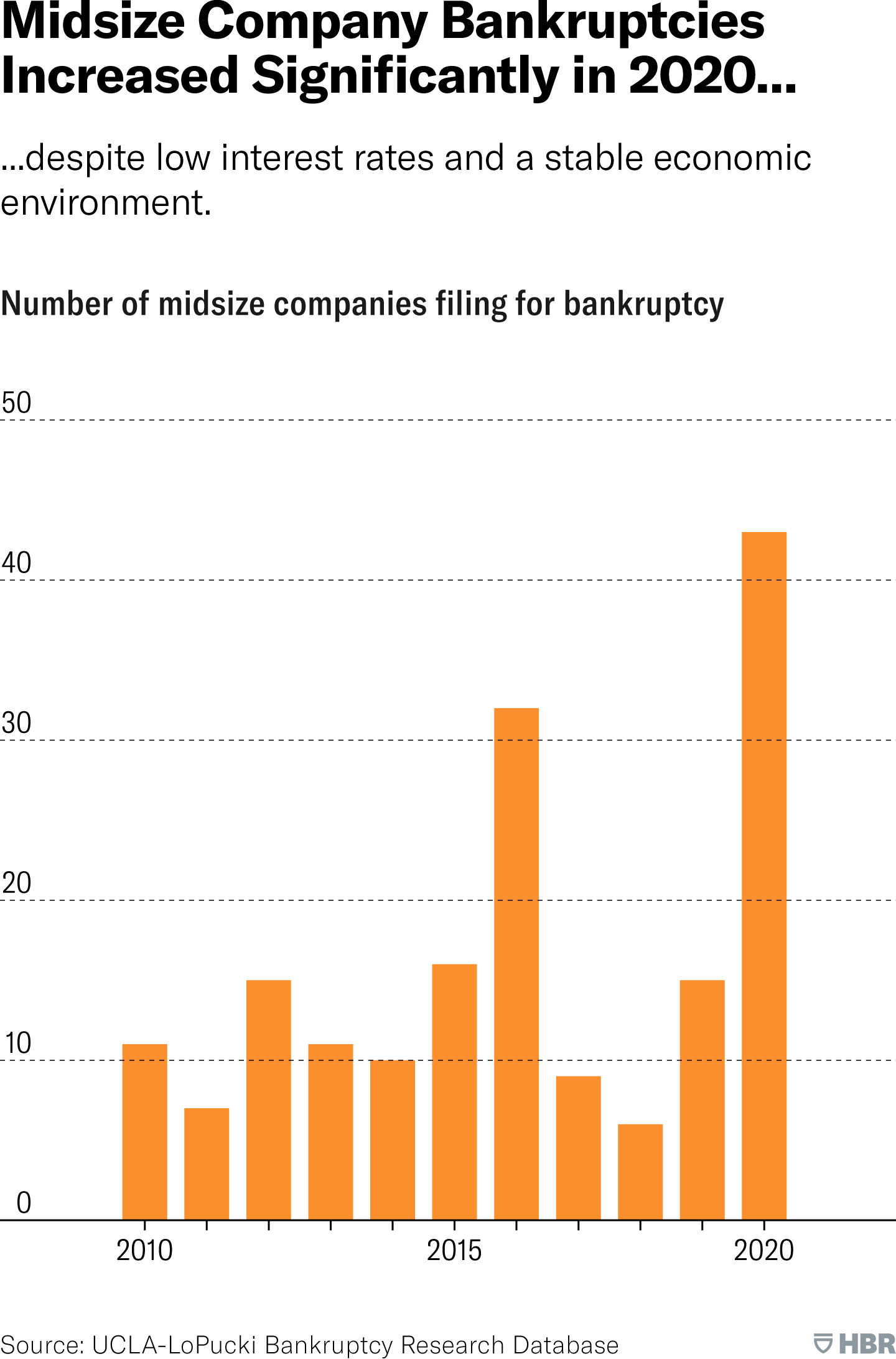 The highest number of annual bankruptcy filings between 2010 and 2019 was 32 in 2016, and the median and averages during the decade were 11 and 13.2, respectively, per year. That number jumped to 43 in 2020, which is a 226% increase from the annual average and a 291% increase over the median. These numbers are based on data up to November 2020 — if December 2020 data had been included, the picture would look even more stark.

These companies include well-known retail stores like J. C. Penney, Pier 1 Imports, Tailored Brands (brands like Men’s Wearhouse and Jos. A. Bank), and Ascena Retail (brands like Ann Taylor and LOFT). The other large industry groups filing for bankruptcy included oil and gas companies, such as Gulfport Energy; lodging and entertainment companies, such as Marcus Corporation; and travel corporations, such as Hertz. Bankruptcy filings would have been even higher but for the U.S. government’s $2.2 trillion dollar stimulus plan, which included $500 billion earmarked for public corporations.

Each company is pursuing a different path to recovery. Consider the outcomes of a few companies that have been around for more than 50 years. The 120-year-old retail pioneer J. C. Penney was sold to Simon Property Group and Brookfield Asset Management. Similarly, century-old engine maker Briggs & Stratton entered into an agreement with a private equity firm to assume all of the company’s assets. The car-rental giant Hertz is selling 180,000 of its roughly 500,000-car fleet while borrowing an additional $1.65 billion in new financing, to be added to its existing debt of $19 billion. In addition, it’s changing its business model by offering an all-inclusive maintenance, liability, and premium roadside assistance package for a fixed monthly subscription fee. The 80-year-old McDermott International Ltd., which provides engineering and construction for the energy industry, emerged from bankruptcy by selling its assets and eliminating about $4.6 billion of debt.

In sum, despite its low interest rates and stable economic environment, the most recent decade witnessed the slowest growth among midsize companies and a continual deterioration of their financial performance. As shown by bankruptcy filings, pandemic shock made this trend even worse, shaking to their core companies that had survived harder economic hits during the last century. Leaders of midsize businesses must understand that the booming stock market is not an accurate reflection of the on-the-ground reality for most American corporations.

After ‘The Voice’ and BET, two Mississippians give one last concert before heading to L.A. Published 6:45 am Monday, January 30, 2023 … END_OF_DOCUMENT_TOKEN_TO_BE_REPLACED