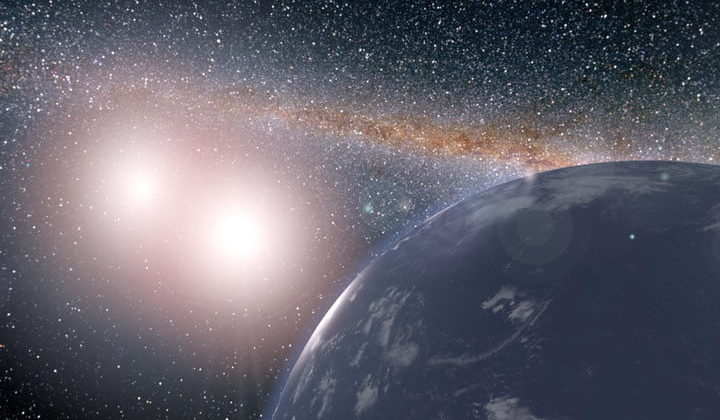 If you’ve ever dreamed of living on an alien world with two suns, like Tatooine from Star Wars, then we have good news for you: Researchers have identified no less than five double star systems which could potentially host habitable worlds.

The researchers identified five systems that are known to have multiple stars — Kepler-34, -35, -38, -64, and -413 — which could also support a habitable zone. In a single-star system, locating the habitable zone, or the region away from the star in which liquid water can exist on the surface of a planet is a relatively simple affair. But it’s more complex when two or more stars are involved.

To identify the potentially life-hosting systems, the researchers used a mathematical model to see which configurations of multiple stars could support a permanent habitable zone. Of the five systems they identified, four have two stars and one — Kepler-64 — has at least four stars. In addition, all of these systems are known to host at least one exoplanet.

Previous research into the Kepler-35 system found that this double-star system could potentially support life if there were an Earth-sized planet orbiting within a certain distance from the two stars. Despite the combined power of two suns, such a planet could still be covered in oceans and wouldn’t necessarily have deserts.

“Life is far most likely to evolve on planets located within their system’s Habitable Zone, just like Earth,” said one of the researchers, Dr. Nikolaos Georgakarakos of New York University Abu Dhabi, in a statement. “Here we investigate whether a Habitable Zone exists within nine known systems with two or more stars orbited by giant planets. We show for the first time that Kepler-34, -35, -64, -413, and especially Kepler-38 are suitable for hosting Earth-like worlds with oceans.”

One of the complexities of identifying potentially habitable planets is the search for Earth-sized planets specifically. Most planets discovered in multiple star systems have been much larger, partly because it’s easier to spot larger planets from a great distance. There were concerns that larger planets could cause collisions or changes to orbits which would make a system less hospitable to Earth-sized planets, but the researchers have found that this isn’t necessarily the case.

“We’ve known for a while that binary star systems without giant planets have the potential to harbor habitable worlds,” said co-author Prof. Ian Dobbs-Dixon. “What we have shown here is that in a large fraction of those systems Earth-like planets can remain habitable even in the presence of giant planets.”