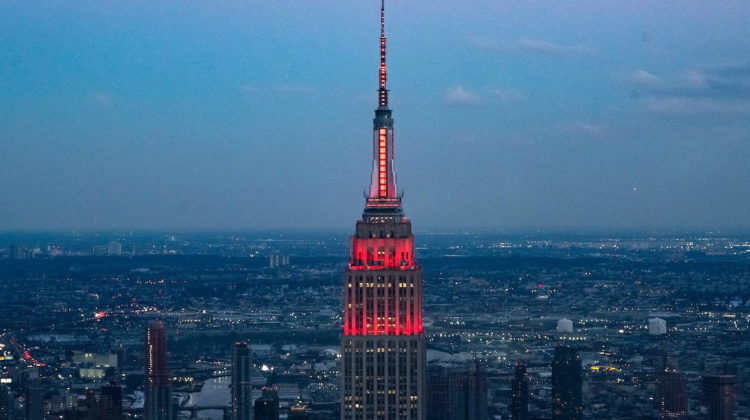 The top of the Empire State Building turned red on Tuesday night to mark the imminent arrival of NASA’s Perseverance rover on the surface of Mars.

The New York City landmark, which, rather fittingly, features a rocket-like appearance, tweeted an image of its red top with the comment: “Together with NASA’s Jet Propulsion Laboratory, we’re celebrating the upcoming landing of Perseverance on Mars with lights in all red tonight!”

Together with @NASAJPL, we’re celebrating the upcoming landing of @NASAPersevere on Mars with lights in all red tonight! #CountdownToMars
@NASA’s Mars 2020 mission launched on 7/30/20 &amp; is scheduled to land this Thursday. #ESBright

After a seven-month journey from Earth, Perseverance is fast closing in on the Martian surface ahead of a precarious landing procedure known in the space industry as the “seven minutes of terror.”

Once Perseverance has safely landed (yes, let’s hope there are no mishaps in those crucial final stages), the rover will set about exploring inside Jezero Crater for signs of ancient life. The vehicle — NASA’s most advanced rover to date — will also spend time gathering rock and soil samples for return to Earth at a later date, and collect data for future human exploration of the faraway planet.

NASA’s Mars rover went through extensive testing prior to blasting off from Cape Canaveral in Florida in July 2020, and even has a twin vehicle operating on Earth. OPTIMISM, as it’s called, is a full-scale engineering version of Perseverance that will be used to test hardware and software before commands are sent up to the rover currently about 125 million miles away.

Perseverance has a traveling companion, too, in the form of Ingenuity, a diminutive drone-like machine that’s set to become the first aircraft to fly on another planet.

NASA’s mission follows two others that arrived at the planet in recent days. The United Arab Emirates, on its first-ever Mars mission, will keep its Hope spacecraft in Mars orbit to learn more about the Martian atmosphere, while China’s Tianwen-1 mission comprises an orbiter and also a lander that will attempt to put a rover on the surface in the next few months.

This post was contributed by a community member. The views expressed here are the author's own.Are you interested in a career in the growing field of … END_OF_DOCUMENT_TOKEN_TO_BE_REPLACED

After ‘The Voice’ and BET, two Mississippians give one last concert before heading to L.A. Published 6:45 am Monday, January 30, 2023 … END_OF_DOCUMENT_TOKEN_TO_BE_REPLACED